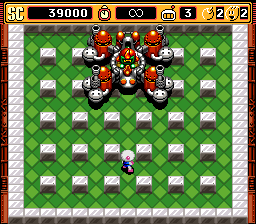 The Bomberman franchise continues to move from strength to strength with its return to the Super Famicom in the form of Super Bomberman 2. Coming only a year after the original and by the same team, it doesn’t add much to the winning formula and forgoes some of Bomberman ‘94’s additions, but it does polish the battle mode to a shine with additions of its own, making it a fan favorite to this day. Critics at the time were also enamored and the game scored high marks everywhere, with Next Generation magazine in particular really evangelizing for it – they called it the third best game of all time in their 21st issue, putting it just behind Tetris and Super Mario 64! Part of its dominant reputation in North America specifically is likely due to the fact that it was the swan song for the series on the console there. Though there would be three more Super Bomberman games on the Super Famicom in Japan, none of these games would end up getting localized aside from a PAL release for Super Bomberman 3, meaning that North American SNES owners were going to be playing this one for a long time unless their friends were interested in playing the upcoming Game Boy games on the Super Game Boy. 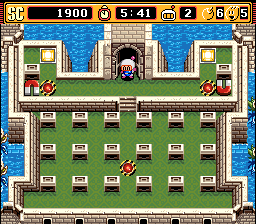 Like the first Super Bomberman, the development team for this game consisted of Hudson Soft members and employees from a company called Produce, which was formed out of ex-Irem staff. Some of the team members from Produce include game planner Takayuki Hirai (who would go on to do planning for Mystic Ark), graphic designers Junya Numakunai and Jun Kusaka (the latter of whom would go on to be a part of Squaresoft games like The Bouncer and Final Fantasy X), and programmer Toshiyuki Suzuki, who was previously a scenario writer on Brain Lord. This game also marks the return of Yasuhiko Fukuda as composer, who hasn’t worked on the series since the Game Boy Atomic Punk.

Even though Bagura was just introduced in the prior “Super” entry, Super Bomberman 2 introduces a new threat through the “Five Dastardly Bombers” (translated to the “Five Bad Bombers” in the English releases), a group of five cyborgs from space who seek to capture White Bomberman for nefarious purposes. They succeed in doing so and bring White Bomberman aboard their spaceship, from which he must escape and return to his home planet. This premise gives an excuse as to why co-op is once again not present, but it still feels like an unfortunate downgrade from the first game. The Five Dastardly Bombers – Magnet Bomber, Golem Bomber, Pretty Bomber, Brain Bomber, and Plasma Bomber – all make multiple appearances throughout the series, but Pretty Bomber in particular would quickly become one of the most iconic characters in the entire franchise, serving as the definitive female representative. To capitalize on Pretty Bomber’s popularity, Hudson Soft hired Japanese idol Haruka Sawaguchi to portray the character at events, appear on commercials, and write songs related to the games. 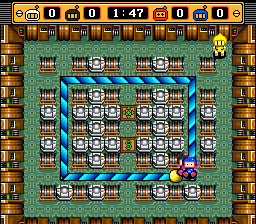 Compared to previous games, Super Bomberman 2 leans harder into complex, more puzzle-like designs for its levels, sometimes to a fault. Your main objective now combines destroying every enemy with having to trigger multiple switches throughout a stage to open the always visible exit. Having two objectives makes stages take longer and requires you to comb them more thoroughly than in Bomberman ’94, which causes the pacing to take a bit of a hit. However, the biggest difference of all is the sheer number of hazards that stand between Bomberman and his enemies this time around.

The first area alone introduces bundles of dynamite that create a massive explosion when set off, tiles that maximize the blast radius of any bomb put on them, and magnets that draw you towards them. This is already quite a lot for the first area of a Bomberman game, but area two ups the ante even further, introducing gaps that need to be filled with movable blocks, furnaces that spread fire throughout levels if they’re set off, and soft blocks that regenerate quickly. These ideas add a layer of complexity and challenge to the proceedings, but not every idea lands successfully. Having to push blocks around like a game of explosive Sokoban isn’t exactly exciting and the final area combines these block pushing puzzles with darkness and hidden landmines, which is exactly as obnoxious as it sounds. 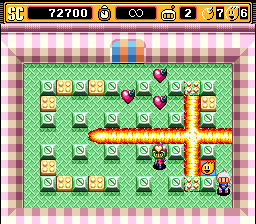 Area three is full of mostly enjoyable surprises, such as enemies that can only be destroyed after pressing a specific switch and tanks that Bomberman can drive, but it also introduces the series’ first instant death pits. Some levels in this area require you to bounce across trampolines and if your aim is lacking, Bomberman will fall into the drink and drown. Area four follows up on this with floor tiles that break and drop Bomberman into the abyss. With infinite continues and passwords, you’ll never lose progress to these tricks, but continuing putsBomberman back at his starting power level, which can cause significant problems during boss fights.

Bosses have been afforded additional gravitas and spectacle this time around, with every area’s boss consisting of two fights in a row. The first fight is against the area’s Dastardly Bomber in a 1v1 match and each one has a unique bomb type with different attributes, some of which are more challenging to deal with than others. These duels can be ended very quickly if you’re powered up, especially since the maximum firepower and bomb level is nine now, but they can be a nightmare for a weak Bomberman. The enemy AI is adept at avoiding most bombs and level one firepower is easy to dodge as it is, so the only way to win can oftentimes come down to hoping your opponent takes themselves out. Each Dastardly Bomber has a machine that they hop into for the second battle. These machines have nothing to do with the Bombers’ abilities in most cases, with the strangest two being Pretty Bomber’s creepy sun and Brain Bomber’s giant Bomberman mech. These fights are oftentimes easier than the previous fight due to them being bigger and slower targets, but Golem Bomber’s fire spewing machine that can engulf entire columns in the blink of an eye is a nasty exception. If you die during the second battle, you have to start from the first one again, which feels needlessly punishing. 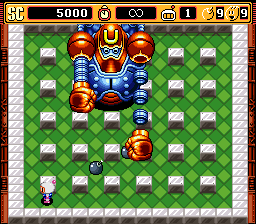 The single player mode of Super Bomberman 2 isn’t one of the franchise’s best, but the battle mode is really what gave the game its reputation and for good reason. Alongside the expected normal/team modes and array of 12 selectable stages (two of which require a cheat code to access), this game’s battle mode now offers the option to adjust the amount of time in a given match or to shut it off completely. In terms of power-ups, Super Bomberman 2 introduces the third of the holy trinity of bomb manipulation items in the form of the Power Glove. Obtaining the glove allows you to pick up, carry around, and throw bombs with no risk of them blowing up in your hands – making it essentially a more flexible and mobile version of the boxing glove. With good aim, it’s possible to instantly trap an opponent near a wall, hit them on the head to make them lose a power-up, or to defeat enemies in the single player mode from afar.

Battle mode also has a new exclusive item in the form of the rubber bomb, which bounces around erratically when kicked or thrown. Even with Louie’s absence, these items do a lot to make the battle mode more hectic and exciting than ever before. This game also marks the introduction of the Gold Bomber, a status bestowed to whoever manages to win a match. The winner gets to spin a roulette that determines which power-up they get to start with for the next round. These items can vary from powerful tools like the power glove to cruel jokes like the getasandals, which lowers your speed by one stage, but regardless of what item they get, they’ll also be blessed with a golden Bomberman and golden bombs for the next round, serving as a way to rub their victory in even further.

Despite its popularity, Super Bomberman 2 has only ever been re-released one time via the ever-elusive Bomberman Collection Vol. 2 on PCs. Considering that other Bomberman games have managed to get re-releases on Nintendo’s various digital services, it’s a bit baffling that Super Bomberman 2 skipped both the Wii and Wii U Virtual Consoles. While no concrete evidence is available online, the unavailability of the “Super” games may have something to do with Produce’s involvement.