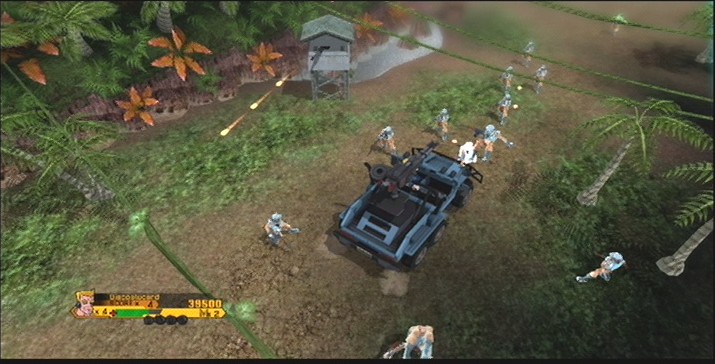 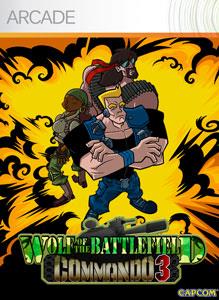 It took them nearly twenty years, but in 2008, Capcom dug up the Commando license and published a new entry in the series, as a downloadable title for the Xbox Live Arcade and the PlayStation Network. It was released around the same time as a resurrection of Capcom’s 19XX franchise. Both were developed by Backbone Entertainment, in an increasing trend for Japanese companies to farm retro properties to Western developers.

Wolf of the Battlefield: Commando 3, in a pseudo-clever melding of the Japanese and English titles, is about shooting lots of bad guys. Up to three players can play cooperatively at once, including online. Its most major modernization is that it uses the dual analog sticks to move and shoot independently from one another, removing one of the major obstacles from so many old overhead arcade shoot-em-ups. 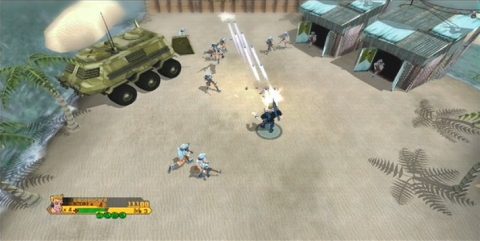 And this is unfortunately where the problems begin. Commando 3 tries to modernize itself injecting a bit of cartoony flavor into the proceedings. While the original was based off World War II and Vietnam-era war flicks, and Mercs was ’80s Schwarzenegger / Stallone / Norris schlock, the kind that took itself way too seriously but were tremendously fun anyway. On the other hand, Commando 3 seems to channel something closer to a goofier version of G.I. Joe. The characters, as shown in the intro and in a few cutscenes, are drawn in comic book style. In game, the male characters are impossibly top heavy, with tiny little legs that carry their muscle figures, wielding huge weapons of destruction. When they get hit, they burst out in Q*Bert style expletives. The final level takes place in a city that is Totally Not Communist Russia, where you fight an evil dictator who is piloting a gigantic mechanical statue. The music is cheesy and catchy, but distinctly un-Japanese like, distancing itself from its predecessor. However, it’s also easy to argue that it doesn’t change nearly enough. There are so many dual-stick shooters around – especially on the Xbox 360 – that one really needs to stand out to separate itself from the pack. Commando 3 already falls due to to its dull visual design, because outside of the cartoony characters, the environments are exceedingly plain. 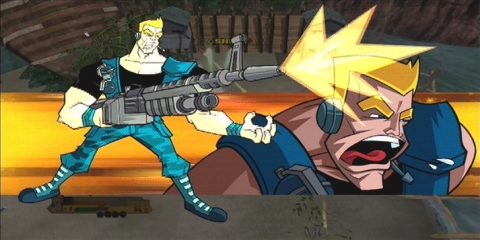 There are three characters – including Wolf, who greatly resembles the hero from Mercs, even though he has a different name – each with their own skillsets. Coyote, the sunglasses-wearing Norris tribute, can take more hits but lacks grenades. Fox, a not-so-subtle allusion to Foxy Brown and other blaxploitation heroines, has low health and can’t carry many grenades either, but can move fast. In practice, this is a bad idea, because Wolf and Coyote move too slowly – all of them should have been able to run as quickly as Fox. This echoes the feel of Mercs, where your heroes seemed to be almost running in place by barely moving (the treadmill effect) but it’s frustrating when you’re trying to dodge enemy bullets. The screen clearing mega crashes are still here – and still accompanied by what appears to be the character doing a rocking guitar strum on thin air – and there are now a limited number of grenades, which can be aimed and tossed by the R Trigger.

The game also features familiar looking power-ups – the POW and Mega Crash pickups are now spinning renditions of their 2D sprites – which also channels the old games. Familiar weapons include the machine gun – which still fires out two streams of bullets at once, three if you grab a POW icon – but there are also three-way guns, missile launchers, and flame throwers. 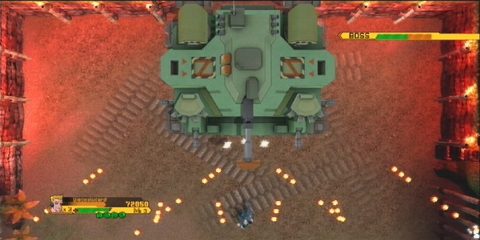 There’s an endless supply of enemies – you can destroy the enemy generators, but more always pop out – and a few vehicles segments, where you hop into jeeps or tanks. But the boss fights are lacking. At the end of the first level, you fight a giant tank, where the camera angle changes to an overhead view and the claustrophobic shot patterns seem vaguely like a bullet hell shooter. At the end of the third level, you fight the same giant tank, except now it has a few more weapons. And outside of the final conflict, that’s pretty much it. There are only five levels in Commando 3, but each of them is sizably long, and it takes roughly a half an hour to complete. That’s fine, especially compared to the brevity of the older games, but it really could have used more setpieces to break up the action. It could have at least featured one instance where you attack a helicopter from the top of a cliff. There are multiple difficulty levels, each which dole out a different number of lives, but there are no continues – once you run out, you start from scratch. Once you beat it once, however, you’ll unlock a stage select, allowing you to play any level at any difficulty.

Commando 3 is stuck somewhere in limbo. It’s technically an okay enough game, but it lacks focus compared to its contemporaries, and it’s not retro enough to evoke nostalgia from Mercs. Capcom and Backbone should have looked at Sierra’s Assault Heroes series, which manages to create a modernized arcade style game that betters Commando 3 on pretty much every level.