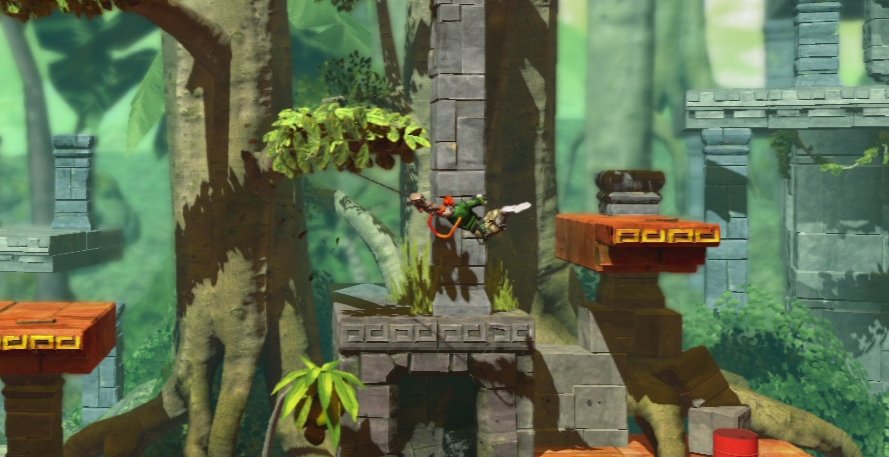 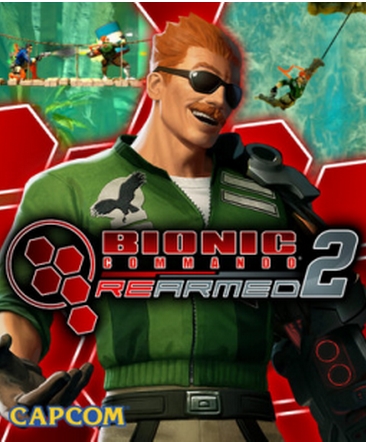 While Bionic Commando Rearmed was initially created to tie-in with the 2009 reimaging, it ended up being substantially more popular than the game it was meant to promote. In light of this, Capcom commissioned a sequel from Swedish development team Fatshark, since GRIN had since closed down. The result is still an excellent game, although one that changes up familiar elements for seemingly no reason. 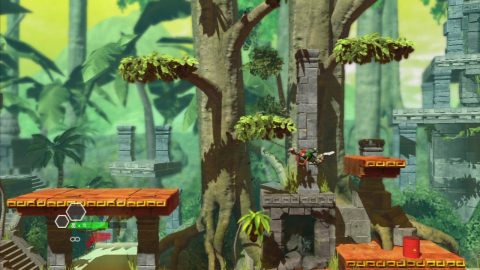 Taking place after the first Rearmed but before the post-apocalyptic landscape of the revamp, this sequel sends our heroes to the island nation of Papagaya (obviously a stand-in for Cuba) to square off against the dictator Sabio (clearly meant to be Castro.) As before, you’re trailing after a group of soldiers that was previously sent to infiltrate the island, lead by one Colonel Brubaker, who have since gone missing. Rad Spencer is the leader of this mission, and he is joined with several other bionic commandos, who don’t really do much other than delivering bits of exposition and getting killed. Rad now has an amazing ’80s-style mustache, and while the character artwork is no longer provided by the legendary Shinkiro, it looks similar enough.

The most controversial new addition is the jump button, the first time seen in a 2D Bionic Commando game. While reviled by long time fans when it first announced, it’s really not that big of a deal – it’s a short leap executed mostly to climb over barrels or hop over small gaps without having to go around them. As much fun as it occasionally was to figure out a way to get past these obstacles, it is much more straightforward and a welcome convenience. The stages are mostly designed around the use of button, although they’re still conquerable without jumping – you get a small commendation if you beat a level solely with the bionic arm, and there’s even an unlockable Retro Mode that prevents you from jumping entirely. 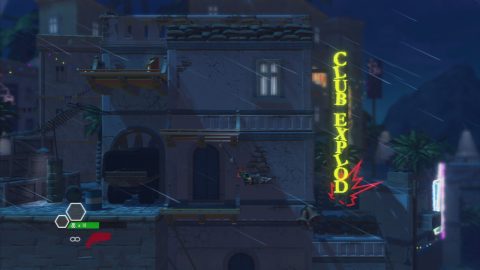 The bigger change is the alteration to the swinging mechanics. Swinging now has more momentum, and it feels much heavier. You can reel out your arm now (which you could only do in Rearmed after it was patch) and even begin swinging from a standstill without having to dig out your shotgun, which is also welcome. You also have to press the arm button to release your grip, instead of just holding in a direction. It will almost definitely feel weird to anyone who’s played any of the previous games before, and it initially seems like the change is totally unnecessary. However, in the last few levels the increased versality requires you to pull off some moves that you would never be able to use in the previous games, most of which involve climbing vertical shafts. These segments definitely makes the change worthwhile, but it takes way too long to get to that point. It also borrows the “death from above” move from the 2009 game.

You now have a scanner called Bio Vision, which lets you pause the screen and examine various objects, similar to the Metroid Prime games. Other than giving the occasional hint, it’s largely useless, but there’s a whole lot of goofy writing here. (“If the use of an explosive barrel needs to be pointed out, you are probably in way over your head.”) The intro to one boss fight begins with a brief conversation about breakfast food. Another continually confuses you with a friend named Randall. Sabio rides around in a silly little golf cart. The map icon for the prison is a bar of soap. Compared to the retro faux-bad ass cheesiness of Rearmed, it does come off as kind of stupid, but it’s a welcome antidote compared to the overwhelming grittiness of the 2009 game. Besides, the game still ends on a fairly dark note, as it acts as a bridge between the two titles. 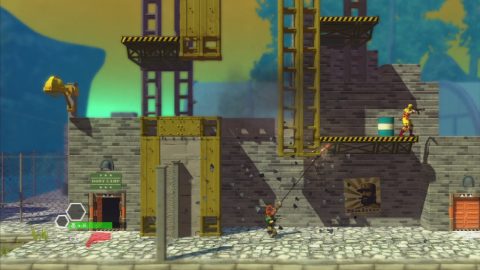 The weaponry system has been totally overhauled. In addition toyour standard gun, there are half a dozen secondary weapons. Some are familiar, like the shotgun, but others are a bit more unusual. The Goliath Launcher is a short range explosive weapon where the projectile will return like a boomerang. The WASP Bazooka lets you lock onto a target and shoots several homing missiles. The Napalm Launcher launches bombs at an arc and is extremely powerful, but it’s easy to get caught up in your own flames. The Yoro Viper sends a jolt of electricity along the floor. The usage of each of these weapons is limited, but ammo pickups are generously scattered around the stage, which will refill all ammo caches completely. There are also two secondary types of equipment. Passive upgrades are always active, and include useful abilities like regenerating health or treasure radars. Active upgrades provide additional weaponry that are also limited in usage, but replenish over time. These include grenades, like in the first game, as well as powerful uppercuts, and an electro claw to shock enemies.

There’s a huge variety of stuff to find, but they’re all sort of like Mega Man weapons – in most situations they just aren’t practical, and there are only a few cases where you really ever need to use them. Indeed, one of the biggest issues with the game is that it’s far, far easier. Remember the brutal AI from the harder levels of the original Bionic Commando Rearmed? There’s absolutely none of that here, as enemies act and react on approximately the same level as the original NES game, even at higher difficulty levels. Each level has an extra life, which permanently raises the amount of lives in reserve when you start the stage. The penalty for death is incredibly light, as you simply resurrect very close to where you were killed. And again, most of the really hard grapples are confined to the Challenge rooms, making most of the core game something of a breeze. 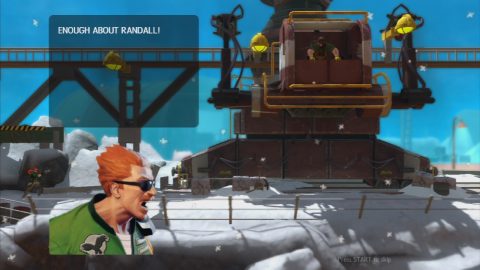 The original Rearmed kept most of its levels extremely faithful to the NES game, which had some, quite frankly, scattershot designs, filled with dead-end corridors and pointless mazes. Given the opportunity to create levels from scratch, the stages here are more coherent, although still not entirely linear. Like the 16-bit Sonic the Hedgehog games, there are usually upper and lower routes through the stages, and since there’s a ton of hidden stuff, you’re encouraged to explore them thoroughly. Some areas are also blocked off on the initial playthrough, and require revisiting once you’ve found some equipment from a later stage.

Alas, some of the more unique aspects of the original game have been removed. The neutral zones are nowhere to be seen. The overhead Commando-esque battles are gone. There is no more pre-level equipment screen, because you can just change weapons at any time. The communication rooms and its little hacking mini-games are also entirely absent. The map screen is still around, but it removes the pseudo-linearity and instead makes one straight path to the end, although there are still fairly extensive amount of stages. There is still cooperative play, but it’s missing the splitscreen, it’s still confined to local play only, and the other multiplayer modes are gone. There are no longer bosses at the end of each level, but are rather dispersed over the map. There are only about five true bosses throughout the game, with a couple of them being recycled. The coolest one is probably the fight against a gigantic robotic gorilla, which, like the first Rearmed, requires that you use the arm to unscrew bits of him. Sadly, Sabio isn’t nearly as amusing as, well, Hitler, and there’s absolutely no parallel to the gory exploding head. 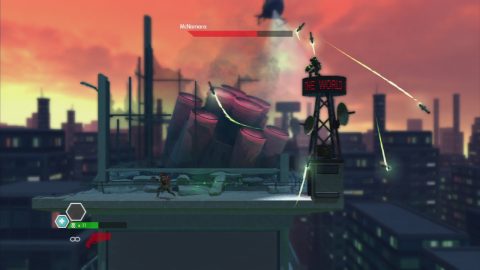 While it makes sense to clean up some of the vestigal remains of the original design, the biggest issue with Rearmed 2 is that it doesn’t really replace it with much of anything. There are sniper stations in some levels, which let you pick off surrounding enemies, as well as scenes where you pilot a helicopter and shoot down surrounding threats. Both of these are initially fun, they’re shallow and don’t add a whole lot. As a result of the more straightforward design, it feels like there’s something missing.

The graphic have improved a bit, although it’s not initially noticeable The first level begins with Rad landing on docks of the island, with an explosion that rocks the night sky in the background. The town is filled with neon lights for locales like Club Explod and The Life Bar. It uses its tropical locale to great effect, as you explore lush jungles and temple ruins. It’s definitely an attactive game, although the downside is that it runs at a lower frame rate than the original if it’s running in definition. If you set your console to 480p it will run at 60 frames per second like its predecessor, but it’s an annoying workaround. The music is once again composed by Simon Viklund, and while there are a number of remixes, there’s also a substantial amount of new material, and much of it is brilliant. Viklund was clearly brought up with the Commodore 64, as the music has the distinct sound of the SID chip mixed in with more modern electronic instrumentation. The first level theme is almost as good as the original’s, and the remixes in the staff credits are brilliant. 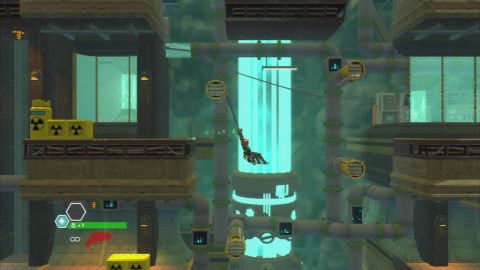 Bionic Commando Rearmed 2 makes terrible first impressions. The change to the control system are annoying, the game is stripped of numerous features, and it comes on the heels of an unpopular entry. There’s a lot working against it, and even in its best moments, it’s never quite as good as the original Rearmed. Still, the core mechanics are brilliant, and some of the changes to the level structure are for the better. 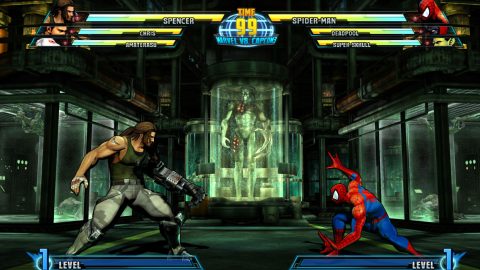 Spencer makes his fighting game debut in the 2011 fighting game Marvel vs. Capcom 3. For some reason, Capcom decided to use the much reviled design from the 2009 game rather than his classic look. Most of his special attacks obviously revolve around the bionic arm, which can be used to grab foes from across the screen. His theme music is another rearrangement of the main theme from the NES game. He also appears in the follow-up, Marvel vs. Capcom Infinite.