Sparkster disappeared into the background after the 16-bit era, with his presence relegated to a handful of cameos. However, it wasn’t until 2010 that he was resurrected for a new adventure. Simply titled Rocket Knight, the game was produced by Konami of America and developed by Climax Entertainment, a British studio who had also worked on Silent Hill: Origins and Silent Hill: Shattered Memories. 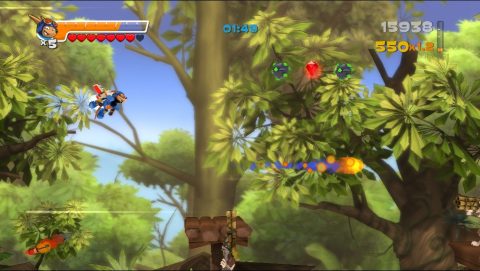 Some time has passed since the last adventure, as Sparkster has settled down and started a family. It’s not long until the wolves start invading, though, so our hero suits up once again to take them on. In the meantime, the opossums end up forging an alliance with the pigs, which doesn’t turn out too well. As expected, Axel is once again there to betray his race and cause Sparkster some trouble. Like Rocket Knight Adventures, all of the cutscenes are told entirely through pantomime. 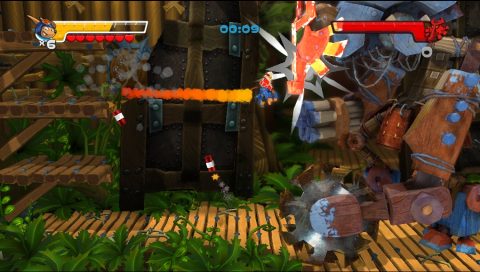 Rocket Knight was developed as a downloadable title for the Xbox 360, PlayStation 3, and Windows-based PCs. Rather than going the route of Konami’s ReBirth titles, which used low-res 2D assets, Rocket Knight uses entirely 3D graphics, although the whole game is still played on a two- dimensional plane. While the graphics don’t really take advantages of an fancy high-definition effects, it still looks decent and plays smoothly, generally running at a rock-steady 60 FPS, a vital requirement to any 2.5D game. The new artwork for Sparkster also looks pretty excellent. The overall visual style is a little bit more cartoony, vaguely reminiscent of Namco’s Klonoa series. Like the original game, the adventure starts off amidst a forest background, before moving through medieval castles, and eventually to a futuristic sci-fi setting. There are four stages in total, each consisting of two main substages and a boss battle. While not terribly long, it’s still a bit lengthier than the 16-bit games, and also saves your progress in between stages, although it still nonsensically keeps track of lives and continues. The soundtrack also includes a remix of the original theme from Rocket Knight Adventures. The rest of the music is pleasant, albeit incredibly bland, and generally just blends into the background. The action is technically an amalgamation of elements from the Sparkster games. Like the Genesis release, your sword no longer shoots out flames, although you can still shoot fire as an alternate attack. The core of the game – the rocket boosting – is entirely different. In the original Rocket Knight Adventures and the SNES Sparkster, you needed to charge it for a second before it would send you rocketing for two or three screen lengths. In the new one, you can boost as much as you want – provided you have enough power, which regenerates pretty quickly – but you only travel less than half the length of the screen. It’s more controlled, and something you use continuously to fly from platform to platform, skewering through bad guys in the process. However, while it’s less chaotic, it’s also not nearly as much fun. It completely lacks the energy that came from launching Sparkster into the air, and it can’t help but feel remarkably restrained in comparison. If anything, it feels closest to the Genesis Sparkster, although you also cannot multi-boost here like you could in that game. 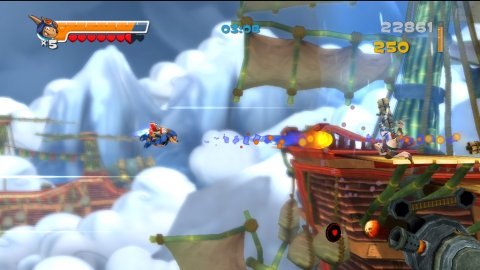 Part of the blame can also be placed on the level designs. The stages here are just like those found in a bajillion other 2D platformers – large and filled with junk to collect. Said junk, outside of life restoratives, is mostly there for the scoring system, which increases a multiplier with the more items you get (or goons you kill) in quick succession. There are platforms to jump on, rails to swing on, walls to bounce off of, and enemies to kill, but there’s no real thought put behind them. Throughout the first half of the game, you’re never given any interesting challenges, either. Things pick up by the third world, where you need to make better use of the rocket dash, but it’s too little, too late. The situation rush aspect and the clever design of the original Genesis game is, again, mostly missing. It’s also far too easy on the default setting. The “hard” mode provides more enemies, but enabling it requires that you uncover the “secret” method to beating the bosses. In spite of this, the boss battles here, too, aren’t as meticulously designed as the 16-bit games, either. 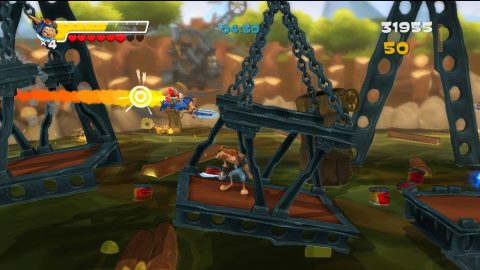 There’s always some concern with rebooting older games. You don’t actually need the original staff to capture the magic of an older game, you just need people that understand why the original was so awesome. Rocket Knight seems to have been developed by people who really didn’t get what made them so fun. The result is a game that’s technically acceptable, but that’s unfortunately bland. 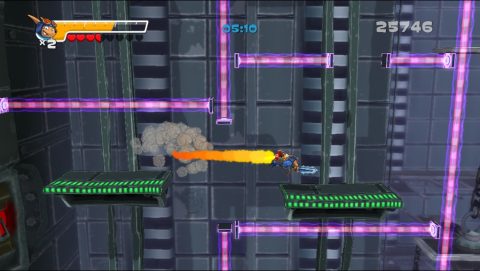 Despite his long absence after the 16-bit era, Sparkster had a number of cameos in other Konami games. He’s in one of the carnival rooms in the Super Famicom game Ganbare Goemon 2 (you can also find Simon Belmont of Castlevania hanging around), and he shows up at the Outer Heaven bar in the Sega CD version of Snatcher, along with several other classic Konami characters. 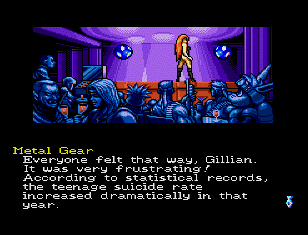 Sparkster also pops up in the Japan-only RPG/dating sim Mitsumete Knight (which was designed by the same guy behind the Genesis Sparkster), complete with theme music and an extremely goofy voice. You even get to fight him for a bit in a battle sequence that looks a lot like Suikoden. He makes a mysterious appearance in the super secret ending to Contra: Shattered Soldier, released in 2002, where the Contra heroes fight against a shadowy figure with a rocket pack. He also appears as a contestant in International Track and Field for the Nintendo DS, released in 2008, which also stars a number of other classic Konami characters. While Sparkster didn’t show up in the Game Boy Advance game Konami Krazy Racers, he at least joins the cast for the sequel, titled Krazy Kart Racing for iOS and Android devices.