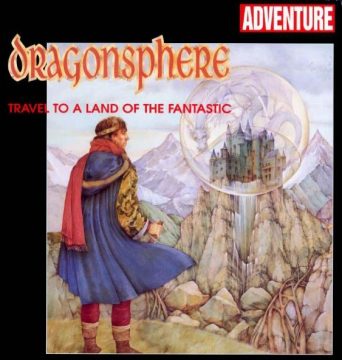 The third of MicroProse’s adventure games using their MicroProse Adventure Development engine, Dragonsphere is a typical high fantasy story. There are knights, there are forests, there are fairies. There’s an evil sorcerer named Sanwe, who was imprisoned twenty years prior but is now seeking to break free. There are dragons and there are spheres, the titular one representing the strength of said sorcerer’s bounds. As the King Callash of Gran Callahach, you must fulfill your destiny and destroy him.

As the King, you apparently lived a sheltered life, having truly met none of your kingdom’s denizens, some of whom don’t take too kindly to you. Outside of the humans, there are the fairies, who speak in infuriating rhymes and whose existence is governed by a curious sense of logic; the shapeshifters, a race that can take practically any form and is uniformly regarded with suspicion; the Soptus Eclitpus, a band of desert dwellers with its own language and strange customs; and the shaks, a race of sentient birds. The magical stones needed to defeat the sorcerer lies within their grasps, and only through understanding their cultures (and general smooth talking) can you obtain the items you require. 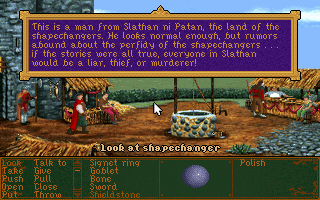 Sanwe is entombed atop of a trap-filled tower, which is on top of a dangerous mountain. After uncovering all of the items you need and scaling these heights, you’ll face off against him, hoping to catch him in a weakened state. Most of the sub-quests up until this point are fairly short, and at first it seems like the story has reached its climax far too quickly. But Sanwe’s defeat is only the first half of the adventure – during this encounter, it’s revealed that your character isn’t quite who he thinks he is (it’s not quite amnesia) and the focus then shifts on saving the kingdom from the backstabbing royal matriarch. From here, you need to discover who you really are (a young unknowing boy named Pid, actually), attempt to rescue the queen (who you’ve thought was your wife but really isn’t), and find a tiny spark of romance with a young duchess who nearly sacrificed her life for you. All in all, it’s one of those twists that is fairly well telegraphed, because there’s quite a bit of good foreshadowing, but nonetheless proves to be surprising unless you’re really paying attention.

This is about as clever as Dragonsphere gets though, because for the rest of the time, it’s a fairly typical fantasy story. However, while it lacks the whimsy of a King’s Quest, from a writing and design standpoint it’s better than most of Sierra’s entries, save for the sixth one. There’s a lot of detail to the writing, revealing both the historical background of the kingdom and the developments of the various other races, although it’s not quite at the level of a Legend Entertainment product. The dialogue is pretty good, although the wooden voice acting and poor sound quality – all of the voices have an annoying echo with them – does it no real favors. 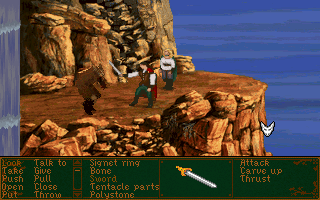 There are no dead ends, and while deaths may be sudden, there’s an option to immediately redo situations leading to death. The puzzles are occasionally silly, one regarding finding a bizarre use for a frozen rat (a “ratsicle”), another involving constructing a love poem to awaken a sleeping beauty (“Originality counts”, you are told by the wise bystander). Other tasks involve an insanely aggravating jewel-guessing minigame, that can only be won through brute force.

Any issues are the same as MicroProse’s other games – the backgrounds aren’t anything special and while the character animation is smooth, the sprites are lacking in detail. The interface is occasionally cumbersome, mostly because there is no standard “use” verb, instead requiring a unique command associated with each inventory item. The walking speed is slow, but outside of the castle at the beginning, there really isn’t too much aimless wandering. In the end, it’s a perfectly capable, B-level adventure game that doesn’t really try to exceed expectations, but is perfectly content at just being decent.