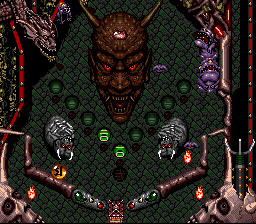 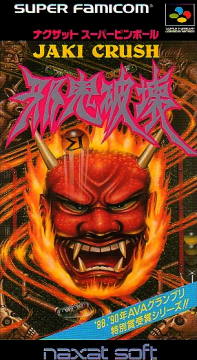 Like Devil’s Crush, Jaki Crush is a three level pinball table with six hidden stages, although this time it’s for the Super Famicom (a “jaki” is a type of Japanese demon.) It offers alternating two-player play, and has an Options Mode where you can select from several possible control configurations and choose how fast the ball moves from two speed settings.

The third level has several moving and stationary targets, a lane along each side that leads back to the second level, and monsters along both sides that can lead to hidden tables when they are lit. If you shoot the stationary monster in the middle of the area that looks like an anthropomorphic cat enough it will change form. Shoot its second form a few times and it will briefly change into a randomly selected glowing dot that leads to any of the secret areas. The second level is by far the least crowded of the three. There are occasionally monsters roaming around, there is a lane that leads back down to the first level, and two monsters below the flippers for the third level that can lead to hidden stages when they are lit. The only other thing here is a pocket to the left of the left flipper that can be reached easily by holding the ball with the left flipper and then quickly tapping it. The first level has several moving and stationary targets, monsters along both sides that can lead to hidden tables by shooting them when they are lit, and a giant face that can be replaced by bumpers by shooting the ball into its mouth whenever it’s open. After it’s replaced by bumpers, it will move to the third level. 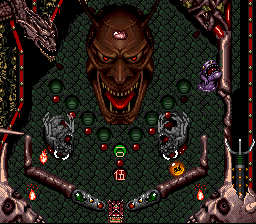 Jaki Crush‘s presentation easily equals, and maybe exceeds, any other game in the series. Its graphics – this time based on Japanese jaki/ogre mythology – are fantastic in every detail and animation. Everything from the mist in the third level of the table, to the ever-changing Japanese characters within the pinball itself, to the warping effects on the face on the first level, to the zooming out pinball effect when you make it to a hidden stage, to the way that the bones on the walls rattle, to the stone structure and lantern that serve as stoppers – it all looks awesome. The creatures that roam the table or are fixed targets are mostly various Japanese monsters. It also has an ending where a woman has ghosts behind her and an explosion of pinballs makes them all go away before Japanese text is displayed on screen. The audio is pretty awesome, too. The music for the main table is a fantastic and lengthy composition, and there are great audio effects like a creepy giggle after losing a ball.

For whatever reason Jaki Crush seems to be the forgotten entry in the series, and even most fans of the first two have never played it. This is probably because it never made it outside of Japan. Pretty sad, because it’s just as good.