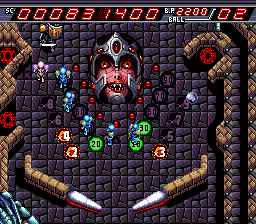 Devil’s Crush (Devil Crash in Japan) was released in 1990, two years after Alien Crush. It retains the same premise as its predecessor – combining pinball with a medieval fantasy theme and moving targets. It also has very similar controls and game physics, and you can still choose between fast or slow speed for the ball from the startup screen before starting each game. Beyond that, several noticeable changes have been made.

From the startup screen, there is an option for an alternating two player mode. There’s also a password option. After beginning a game you will notice that the primary table has three levels rather than two. Instead of the screen instantly switching from level to level when the ball moves to another level, the screen moves with the ball at all times. I prefer the original method myself, but it works just fine here and never causes any problems at all. You might worry that this would cause the flippers to constantly move in and out of view and kind of “sneak up on you” and make it difficult to judge where the ball is going to reach the flippers, but as each level is approximately screen sized the only time that the relevant flippers are not going to be visible is when the ball is moving from either of the two higher levels to a lower level. There are a grand total of six hidden tables this time out and each has its own design. 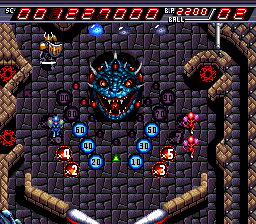 The soundtrack for Devil’s Crush is simply fantastic, filled with some of the best synth rock on a 16-bit console. There are also several excellent sound effects, like the taunting laughter from the skull after losing a ball. Graphically, the presentation is absolutely awesome. The theme seems to be based on Western demon mythology, though there aren’t really any specific references. There are skulls, dragons, fire-breathing behemoths, and a multitude of other monsters. Most of the walls look like they are made of stone, as if they were caves or castle walls, and there is a target that looks like a castle tower. On the second level of the table is a female face that progressively changes appearance after being hit – eventually becoming a dragon. If you score any more than 999999990 points it will max out the point counter and you will get treated to a very brief ending with a woman and a pinball that makes no sense whatsoever.

Technosoft modified the game and brought it to the Sega Genesis as Dragon’s Fury” (Devil Crash MD in Japan). The controls are identical, and while there have been no changes (other than minor cosmetic alterations) to the main table, a few other alterations have been made. The ball speed can be modified from an Options Mode, where you can also customize the controls almost any way you like. Since the Genesis can’t display as many colors as the TurboGrafx-16, the visuals are a bit brighter and more washed out, although they still look decent. However, the Genesis’ higher resolution allows for an addition status bar on the right side of the screen. The ending is almost identical, but it’s been redrawn. The music uses the same compositions, but with completely different synth arranged internally by Technosoft. Technosoft also included five songs from some of their previous games (accessible via specific passwords). 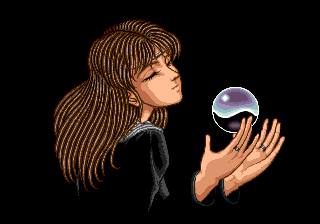 The biggest change is that the hidden areas have been completely remade. A few are merely redrawn version of the same stages, but others are completely different from the TG-16 version. Beating the game is accomplished a bit differently as well. Rather than maxing out the point counter, a seventh hidden stage becomes available if you finish all six originally available hidden stages, and if you beat this final hidden stage than you beat the game.

There are odd bits of censorship in both versions regarding the stars. In the top part of the stage in the TG16 version, the five-pointed star was changed to add more points. For the Genesis version, the title was obviously changed to avoid having the word “Devil” in the title. Perhaps fearing that the little spinning red stars would encourage devil worship or something, they changed them to slightly different looking five-sided stars. This was particularly strange because the original stars weren’t even pentagrams to begin with (they’re actually six sided.)

Perhaps due to being released for a more accessible console, or more likely because of its immense scope, Devil’s Crush tends to be the most popular, and most well known, game in the series. It’s certainly up there with the others regardless, and its Genesis port is definitely the best pinball game for the console. 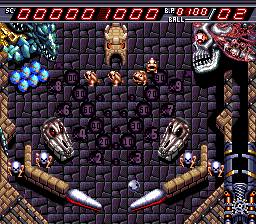 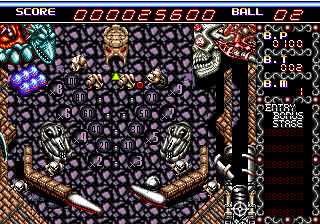 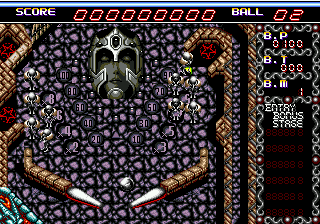 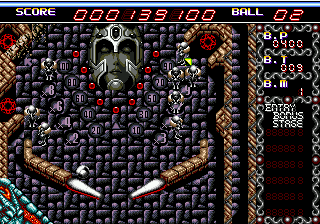 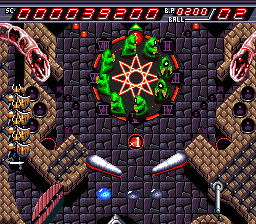 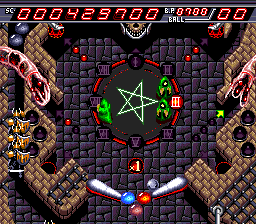