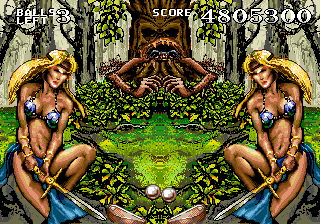 The Genesis version of Dragon’s Fury was actually distributed in America by Tengen. It must have been a hit for them, because they decided to cash in on the game by releasing a sequel without any involvement from Naxat Soft or Compile, and called it Dragon’s Revenge. It’s actually a pretty good game, but it isn’t up to the level of its predecessors.

The biggest problem comes from the table design itself. The entire table’s design is fairly angular and the placement of objects on the table leads to less intuitive play than in the other three games in the series. There is a seemingly pointless area to the left of the main portion of the table where the ball can bounce into. It lacks flippers or anything else to keep you involved, it doesn’t have any targets that are worth a large amount of points, and the ball takes way too long to get back to the main area of the playing field – so it really doesn’t do anything other than slow down the pace of the game. The third level of the table is very sparse, and the entire table has way too few targets, so there isn’t very much to do. The second level has three flippers, but their placement is poor and they often get in the way of trying to hit the ball up to the second level as a result. The first level of the table is busier than the other two, but it still loses points for it being a bit easier for the ball to drain than would be ideal. The hidden stages are actually probably better designed than the main table, but they are more difficult to reach than in the rest of the series. 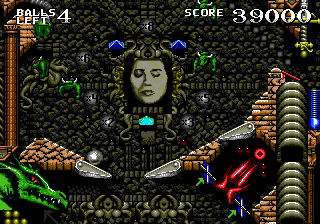 Both the ball physics and presentation are not quite up to par either. The ball is still easy to control and make accurate shots with, but it often takes HUGE bounces off of objects and ricochets like crazy all over the immediate area. It’s a VERY fast paced game, no question about that, but the way the ball bounces is a tad awkward. In a series with such superb graphics and music, the presentation of Dragon’s Revenge is majorly disappointing. The theme seems to be a generic fantasy theme that lacks any real identity, and doesn’t possess the strongly defined visual style that each of the other three games has. There are a few nice looking graphics, like the woman becoming a dragon (or whatever is going on) in the intro, or the more elaborate designs of the hidden stages, but the main table looks gaudy and forgettable. The music isn’t bad, but it’s a bit too generic to be memorable.

Dragon’s Revenge is definitely the worst of the Crush Pinball games, and despite all these complaints, I actually do genuinely enjoy the game. Nothing about it is great, but nothing about its gameplay is bad either. Still, it just can’t quite compete with the directness of Alien Crush, the scope of Devil’s Crush, or the execution of Jaki Crush, and it doesn’t begin to compare when it comes to presentation. So if you have the other three available, there really is very little reason to play it other than for variation.