Eternam is a point & click game released by French development studio Infogrames in 1992. While largely overshadowed by Alone in the Dark at the time, it can stand today as one of the strangest and funniest games ever released by the Lyon-based company. While Frederic Raynal received all the applause for conceiving Alone in the Dark, few know of Hubert Chardot, the writer behind the famous horror series. According to one of his very few interviews, he was hired by (in)famous Infogrames CEO Bruno Bonnell, thanks to his love for genre movies & the HP Lovecraft mythos. He worked for more than ten years as a script writer and game designer in the video game industry. The Devil Inside, Shadow of the Comet, Prisoner of Ice and Time Gate are some of his contributions to French video game industry. 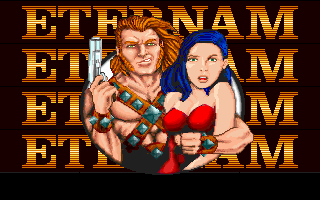 Eternam is his baby and a completely insane trip into his subconscious. The plot is a mix between Michael Crichton’s Westworld and any old James Bond story. You play as Don Jonz, a skillful space sheriff from the Orion United Forces. But even galactic heroes need holidays, and that’s why you’ve landed on Eternam, a crazy amusement park-ish planet conceived for unforgettable vacations. Unfortunately as soon as you reach the ground, something is fishy. The androids serving as guides have gone rampant, and you’re forced to trade your high tech gear for a strange barbarian outfit. Indeed, your nemesis Mikhal Nuke has laid a cunning trap to kill you once and for all. You’ll have to explore Eternam in order to neutralize him and save your hide. Don Jonz is helped by the only technician left on Eternam, a lovely gal named Tracy who has digitized herself in the network in order to avoid the planet’s tyrant. She will give you hints, cheer you up or mock you if you die in some stupid way.

And this is only the beginning of the madness. In order to reach the volcanic lair of Nuke, you will have to cross five different islands, each representing a different historical setting. Your first steps will take you on the shore of a medieval island ruled by a baron keen on creating deadly traps for adventurers. The castle inhabitants include TV addicted statues, a rather talkative skeleton and a crazy German scientist. The trend of LSD-induced anachronisms will continue as you progress through the various islands, especially when you meet a group of 20th century computer game programmers.

Eternam is proof that French culture can be applied to video games, in some unexpected ways. For example, your knowledge of French history will be put to the test. Eternam makes experimenting the insanity of the French Revolution a dream come true. You’ll need to think your way out of a revolutionary trial and explore a replica of an 18th century city on the brink of civil unrest. The rest of the locations are also quite refreshing and absurd, including trips through Egyptian pyramids, a jaunt to the moon, and a splendid futuristic city. 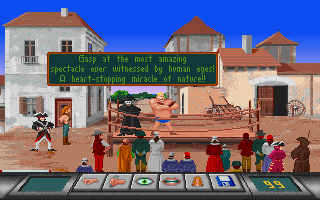 The controls in Eternam are bad. As in most point-and-clicks, you move in a two dimensions space and use four icons (use, talk, pick up, look) to interact with the environment. The very definition of point & click? Except, you can’t click, so the keyboard keys become the only way to play. Infogrames later corrected this problem in the spiritual sequel, Shadow of the Comet, which otherwise used a similar interface. 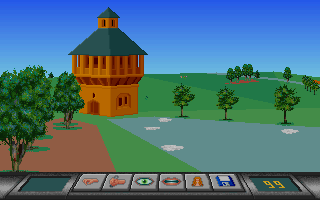 Another weird element lies in the transitions between the islands’ main points of interest. Exiting houses and places will turn the game in a first person action game, with a very crude 3D rendering of the island serving as a way to move from point A to point B. The only challenge in this part resides in the encounters with the savage denizens of Eternam. You’ll be attacked by strange winged snakes who will kill you if you’re not careful. To defend yourself, you can shoot lasers by pressing the space bar and… that’s pretty much everything about this phase. Used as a simple showcase for the game, these sequences come from Drakkhen, another title from Infogrames. (The 3D engine was created by the always-resourceful Frederic Raynal.) Already strange in a role-playing game, this feature is absolute nonsense in a game otherwise based on puzzles and dialogues. It’s worth mentioning that Drakkhen‘s protagonists make an appearance in this game; they must be killed in order to complete Eternam.

The biggest strength of Infogrames’ game lies within the graphics. While not really spectacular in general, every major event or death plays a gigantic cartoony cutscene in glorious 256-color VGA. All those little animations made by hand really add a unique touch to the whole experience. 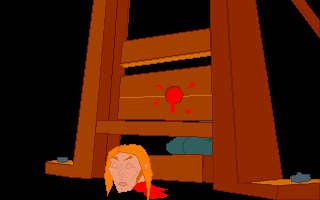 Unfortunately, Eternam‘s sky is clouded by two terrible dark spots. Quality-wise, the audio is greatly lacking. Adlib is the only driver available on the DOS version and doesn’t really help to enhance the lackluster music. Like Hubert Chardot, Frederic Mentzen is an old Infogrames veteran. He worked on the soundtracks of Drakkhen, Alone in the Dark 3, V-Rally and many other secondary games in the studio, and wasn’t really offered a good canvas on Eternam. A CD version was released later on but the only real addition is voice acting. The actors seem to have enjoyed themselves quite a bit and did a decent job, but the same thing can’t be said of their implementation. Between the awkward silences and the random cuts in the speech, Eternam‘s dialogue feels more like a Luis Bunuel movie than a chatty adventure game. 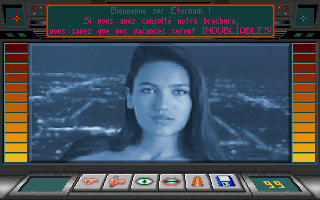 But it’s nothing compared to the difficulty of the game, the most annoying downside for sure. Don Jonz is punished all the time for entering the wrong house, the items are ludicrous and most of the time completely useless, and the puzzles themselves tend to answer only to the game designer’s twisted will. It feels like a bad copy of the early Sierra games, where the only aim of the mortal traps is to artificially boost the length of the game. 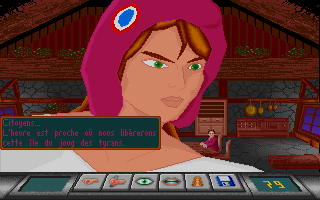 In a nutshell, Eternam is funny but not fun. Every new location discovered, every bit of dialogue will probably make you laugh, that’s true. But on the other hand, the puzzles get fairly tedious and the absence of mouse control tend to make the whole adventure even harder to enjoy. Fortunately, Chardot learned from (most of) his mistakes as Shadow of the Comet offers a much smoother game experience. 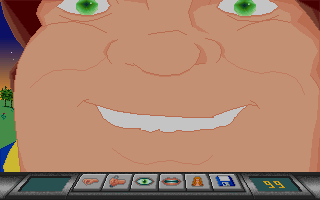