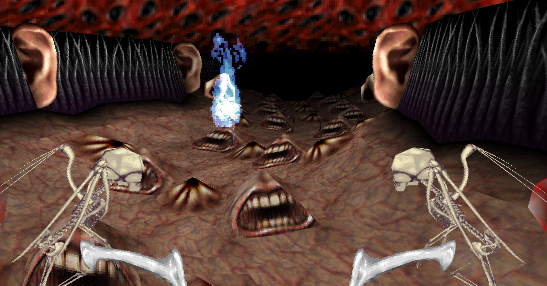 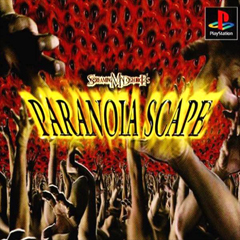 In every family there’s a weird child. You know, the kind who smokes strange stuff and draws dead birds sketches with charcoal. Well, in the pinball games family, Paranoiascape would be one of these. Released exclusively in Japan on the PlayStation in 1998, it’s the only game developed and published by Mathilda, which probably was a one-time studio. If you look closer to the game’s title, you’ll notice a name is associated with it: “Screaming Mad George“. Indeed, the game’s short intro credits him with creature design, music and concept. But who is this guy? 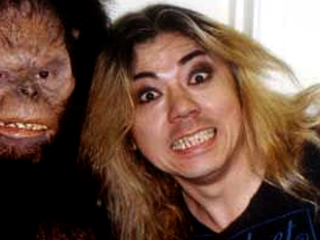 Behind this nickname hides a Japan-born American citizen called Joji Tani. He isn’t a game designer, but rather… a special effects and make-up professional in the film industry! He has worked on some cult and sort-of-renowed movies (Predator, Society, A Nightmare on Elm Street 4) as well as on quite a bunch of B-series flicks of more dubious artistic merit (Jack Frost, The Dentist II, Curse II: The Bite). He’s no stranger to the musical scene either, seeing how he was active in the punk subculture and even founded his own “shock” group in the late ’70s. He later produced special effects for a wide array of musical clips such as Nine Inch Nail’s “Closer” and Cypress Hill’s “Dr. Green Thumb” amongst others. That’s what he likes doing: Designing repulsive monsters using a method he calls “Anti-Realism”. Indeed, there is no trace of digital editing in his works: everything is hand-made, precisely giving it this unsettling feeling of grotesque “irreality”. Here he explains why he chose to create these surrealistic figures: “I don’t like real violence, but I like created violence. […] You can enjoy fake violence even if it’s a really, really horrible thing. But I don’t like violence when it’s real. I don’t like anything that is real.” 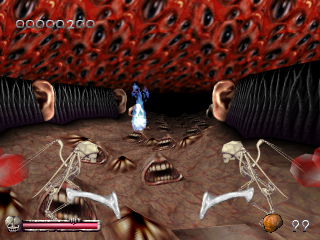 But what could a game designed by such a freak look like? And a pinball game above all! Well, this entry in the genre definitely sets itself apart as it’s in 3D and… played in first person. Yeah, a first-person pinball! The playing area is seen from behind the flippers rather than above. This isn’t all: You can move around as well! This will be required as you need to go through linear paths in order to progress through the game’s levels, while keeping the ball flying around without it falling behind you. The wide slingshots on your sides will often be of great help in not losing those balls that have gone awry. There are 9 levels in total, with each having a specific objective (in addition to scoring): you simply need to reach the exit in first level, but the second features a boss to defeat and the third requires you to get your ball back from a bunch of flying fishes! Beware of sharp blades and hostile creatures though… because, yeah, you have a life bar. You can get killed in this pinball game! If you don’t just blindly run around, there should be no problem, but never forget things are out to take a bite out of you while you’re flipping that ball. There are three difficulty levels (easy, normal and hard) and you can set the number of extra balls (5, 10, 15 and infinite) as well; continues themselves are always infinite but losing all your balls resets your score.

And the game’s actually pretty decent! It’s true the ball easily gets out of control, and you will often find yourself randomly smashing the triggers without much thinking in order to progress, but it’s not really much of a big deal; the game aims to be fun and unwinding rather than a staple of the genre. Most hardcore pinball fans will probably think the gaming environment’s originality impacts negatively on gameplay complexity (it’s true there isn’t much more than bumpers) but one must not forget that these daring visuals are precisely what makes ParanoiaScape stand apart. 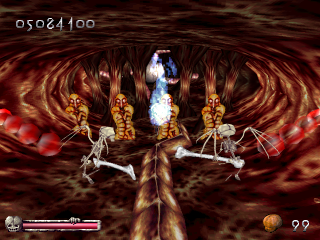 That’s what makes this game really worth trying: its universe. There’s no need to point out that it’s one of the most fucked up video games in existence; it’s pretty obvious from the screenshots. Screaming Mad George indulged himself, and his distinct “Anti-Realist” style is easily noticable even wihtout having seen any of the films he worked on. Trying to go into details regarding the game’s monster design is futile if not entirely impossible; it’s just so weird, you really have to see it to understand what it’s like. These monstrosities just don’t fit in simplistic “zombie” or “ghost” categories, they’re something else. But the world these horrible creatures inhabits looks even more disgusting: you’ll travel through organic halls with giant syringes nailed in the blood-red ground, infected intestines plagued with deformed parasites, absurd cities overflowing with human cockroaches, and so on. It’s both gory and ridiculous, disgusting and funny, repulsive and curious and that’s what makes it feel like an idiotic nightmare. This nonsensical atmosphere of plain weirdness is amplified by the unusual gameplay, pinball rarely being the genre of choice when it comes to this kind of aesthetics (you’re smashing a brain-ball with skeleton-flippers after all) as well as by the punk soundtrack, sometimes agressive and sometimes displaying darkwave or industrial influences. The final sequence is completely otherwordly, and the game closes on a dirty FMV featuring the bestiary.

That’s it. Just try ParanoiaScape out; it can be completed in about half an hour if you get hooked. Pinball enthusiasts may regard the game as weak despite its originality but it’s an interesting oddity nonetheless, and its strange universe is something a gamer can hardly forget.