Violent Storm is the final beat-em-up Konami would release for quite some time, and the final one of any real worth. It’s a rather bittersweet ending, not because Violent Storm is a bad game to end it all on, but because it’s far and beyond Konami’s best work in the genre. That makes it even sadder to realize this is the last beat-em-up we’d see from them until the PlayStation 2 era. Even then, all we got from that were some rather mediocre games based off of the 2003 TMNT series. It’s quite unlike anything they’ve done before, and maybe that’s what makes it so good. Some call this the third game in the trilogy that began with Crime Fighters, but Violent Storm plays so differently and shares so little with it and Vendetta, that it seems somewhat doubtful. 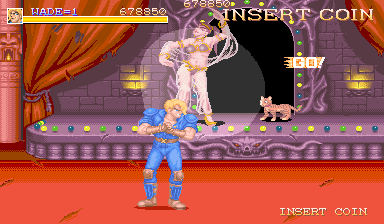 It’s the post-apocalypse, and the criminal organization Geld are being a bunch of jerks. While Sheena, the girlfriend of our heroes, is out shopping, she ends up getting captured and dragged off into their territory. Because even when it’s the end of the world, you just can’t stop gangs from kidnapping your lady friends. And so, Wade, the average guy, Boris, the strong one, and Kyle, the weak but fast guy set off to beat up everybody and get Sheena back. 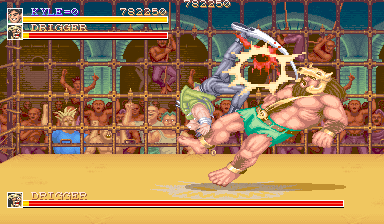 The post-apocalypse isn’t a setting you see often for a brawler, but it’s handled here in a pretty unusual way. Violent Storm might be brightest, cheeriest nuclear holocaust depicted in media next to Adventure Time, and it’s a little jarring. The sun’s usually shining, everything’s made up of bright colors, and you’ll often encounter people in the background just sitting and having a good time. It’s a pretty unique take on the whole setting, however, especially one that hasn’t really been done in many brawlers, so it gets points for that. 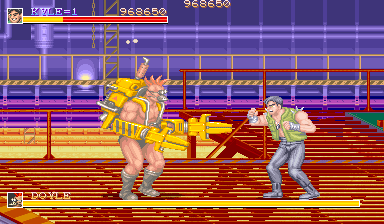 Compared to Konami’s other brawlers, Violent Storm takes almost completely after Capcom’s Final Fight. It’s a bit of a sudden change from Konami’s somewhat looser style, but you can’t fault what works. The movelist is a little bit wider than Capcom’s game, however, as every character has a low-hitting attack and a dashing attack, done by moving the joystick diagonally down and hitting a button. The dashing attack is especially useful, since it doesn’t cost you any health to use, and you can even cancel it into a forward jump if you need the extra distance. You can also hit enemies while they’re down, or pull them into a grapple. This is especially useful for Boris, since, as the grappler, you’re going to want to piledrive people as often as possible. 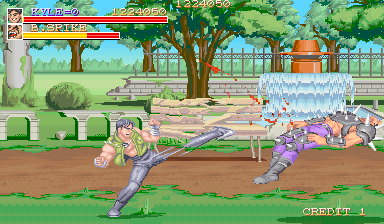 So, it might not be the most original brawler Konami’s ever put out. It is, however, spectacularly fun in just about every way. Everything about this game just facilitates fun. For one thing, this is one of those rare beat-em-ups that isn’t afraid to crowd the screen with enemies. This often leads to those magical moments where you’re utterly surrounded by mooks, only to end up taking them out all at once. Most enemies don’t actually have that much health, meaning that it’s usually easy to take out a whole group at once. It’s as if the game actively knows that you’re wanting to move forward, and it doesn’t want to keep you waiting. There’s also a lot of stuff you can pick up and use, not just limited to the standard pipes and knives, but also things like chairs, barrels, and strangely, piglets that turn into footballs when you grab them. 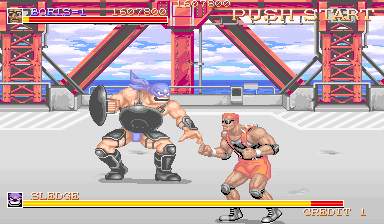 All this leads to a game where you’re constantly moving forward, so the game never ends up feeling like a slog or have you wishing it would end. In fact, there are almost times when a level feels so short, that you’ll be surprised when you’re already at the boss. This is hardly a slight against the game, however, as it’s a rare thing for a beat-em-up to know when to go ahead and end, and even rarer for you to almost wish it didn’t end so quickly. It helps that there’s much more actual depth to the game, too, given its inspiration. There’s actually some thought involved in how to best take out the enemies, and every enemy has its own distinct pattern. 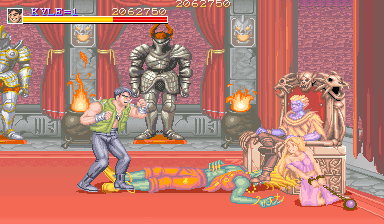 Another reason the game never ends up getting old is its very goofy sense of humor. There’s always something silly going on, from the way it’s possible for fat mooks to fall on top of the weaker characters when they attempt to throw them. Or the way chain-wielding enemies can grab your character and send them spinning, complete with a slide whistle sound effect. The highlight, however, would have to be the bosses. You’ll go up against foes that range from things like an evil train conductor wielding an electric ticket puncher, to a rather flamboyant guy in a thong who constantly leaves himself open to attack by posing, to the guy who’s strapped in what looks suspiciously like the Power Loader of Aliens fame. The game is generally always like that, which means it’s hard to stifle at least a smile from the sheer goofiness of the whole thing. 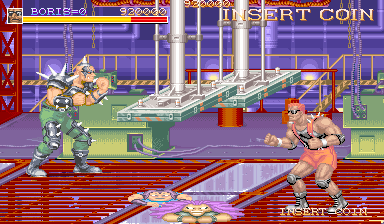 It’s a really good-looking game, as well, with some huge sprites, probably the largest ever featured in any Konami brawler. The backgrounds have a lot of nice touches as well, such as a hippy’s food stand you can smash up for some health-restoring lobster, making the poor guy look rather distressed while you fight off enemies. The music, in a rather strange choice, actually takes more after ’60s surf rock than anything, complete with cheesy vocals. It’s not always like that, like the silly rap you’ll hear in Stage 3, but the soundtrack actually feels the goofy, cheerful mood the game seems to have all the time, so it works. 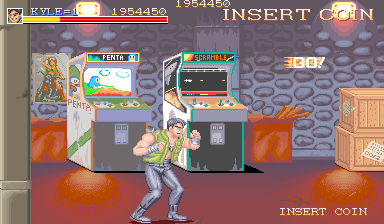 Violent Storm would be the last beat-em-up Konami would release in the arcades, and it’s pretty much the best possible way they could have ended it. It’s a spectacular beat-em-up that seems to actively encourage you to enjoy it, and it’s difficult not to. It’s certainly not a very original game, but it’s got enough of its own personality that it doesn’t always need to be. It’s definitely one of the best arcade beat-em-ups out there, and one that’s worth playing as soon as possible. 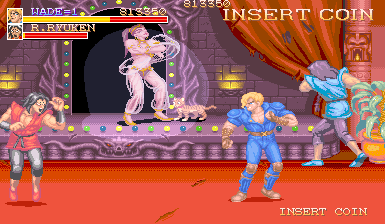 And so, probably due to the declining interest of the genre, Konami would go on to move to other genres, like the many, many rhythm games that they’d fill the arcades with. They’d never release another beat-em-up in the arcades, and their console output, like the 2003 TMNT games, never really had the same magic. There’s been more than a few attempts to capture that lightning in modern gaming, through games like Castle Crashers and Scott Pilgrim Vs. The World, so there’s still plenty of love for their old work. They might not have been the deepest brawlers out there, or the best, but they certainly knew how to put a smile on somebody’s face.