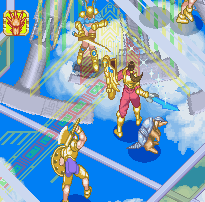 Gaiapolis is definitely the most original of Konami’s arcade brawlers. In fact, it takes so many liberties with the genre, much like Bucky O’ Hare, that it’s hard to say if it can be called a beat-em-up at all. It’s not really quite as interesting to play as Konami’s usual fare, but it’s admirable for trying a lot of new things, at the very least. The plot takes place in your standard fantasy kingdom, where the fantastically named “King Darkness” has sent his armies and machines to destroy the country of Avalon. Now, three heroes have to find three keys that will let them open the door to Heaven, where King Darkness apparently lives. Our heroes are the Prince, who’s thoroughly average, the fast but weak Fairy, and the slow but powerful Dragon, who should be your only real choice. 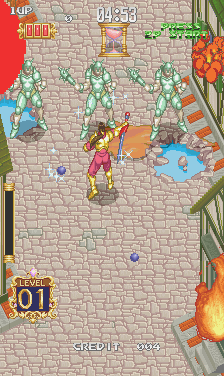 Gaiapolis doesn’t play anything like Konami’s older beat-em-ups. For one thing, the entire game takes place on an overhead view, as opposed to a side-on one. You’re also much more limited in terms of moves, with your only main attacks being a basic combo and a dash attack done by double tapping in any direction. You can also block by holding down the attack button, which is useful in case you end up trapped in a place where it’s hard to avoid attacks. Other than that, that’s basically it, with the moveset being so limited that there’s not even a jump button. It could be worse, since anything more complicated would probably be a pain to connect with, given the perspective, but more moves would have been nice. 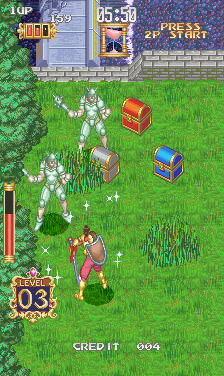 You also find spells every so often, which work like one-use screen clearing attacks, and different colored eggs, with each color dropping a different little animal companion that follows you around. Companions can be ordered to attack nearby foes with the second button, but they can take damage and eventually die, forcing you to find a new egg. More interestingly, though, Gaiapolis actually has some RPG elements, something that Konami’s never really attempted in their brawlers before. Characters can get experience by fighting enemies and collecting treasure, and eventually level up. It’s honestly a little unclear what leveling up does, however, aside from increasing your maximum health. You also find progressively better shields every so often, although the benefits of these are similarly vague. 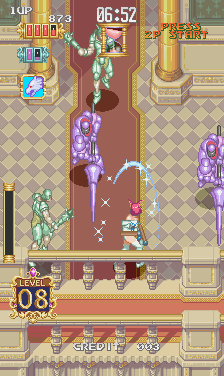 Once you get past the novelty of the RPG elements, Gaiapolis isn’t really particularly special. It still all boils down to moving forward and hitting things, only with a more limited moveset than usual. It’s hardly a bad game, at the very least. It controls well, and the pacing is quick enough that you’re always generally moving forward, since enemies never take too many hits to kill. The one real problem with the game is that it’s a little too long. There’s a surprising number of stages, although some of them only consist of a single boss fight or otherwise end incredibly quickly. 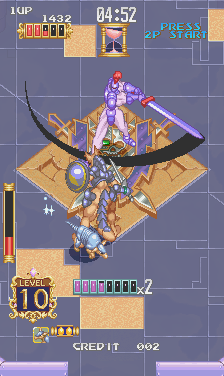 There are a few interesting moments in the game, although they’re sadly few. Some of the boss fights are particularly cool, like a fight early in the game that puts you up against a giant tank that turns into a walking mech once it takes enough damage. There are a lot of points where the game has some pretty interesting mechanical designs, so it’s kind of a shame that you’re generally stuck to fighting generic soldiers and monsters. At least some of the enemies are pretty cool, though, such as the zombies that you chop in half, while their legs continue to attack you. It’s really only bright spots like that which make an otherwise somewhat dull game interesting, sadly. 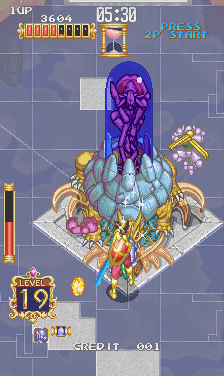 The game looks pretty nice, at least. The environments you fight through look pretty nice, although they tend to be pretty plain. The most impressive sprites are generally the larger bosses, who tend to have the more interesting designs on them. The music isn’t particularly exciting, either, done in a bit more of an orchestral style than most of Konami’s work with the genre. What is a nice touch is that there’s quite a few animated cutscenes during the game, some of which use some pretty nice looking art. 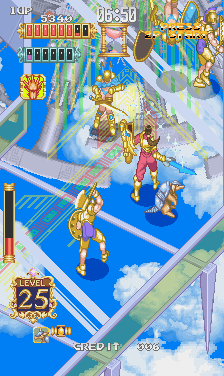 Gaiapolis is hardly a bad game, but it’s sadly a lot more average than the concept makes it sound. There’s just not that’s particularly exciting or noteworthy about it. It would help if its RPG elements, the thing that would really make it stand out more against the games that came before it, saw more actual use. As they are, they’re really just window dressing, as opposed to how well similar games, like Capcom’s Dungeons & Dragons games, used them to add a sense of progression. You’re better off playing those for a more memorably fantasy beat-em-up fix, especially that actually has the star license power behind it. 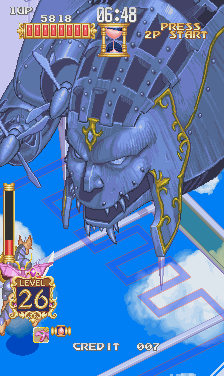 While the game never got any official ports, some pirates from Taiwan, for reasons nobody can comprehend, released a bootleg port for the Famicom. 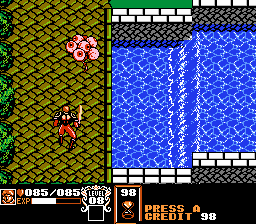 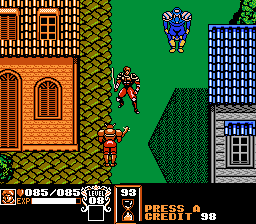