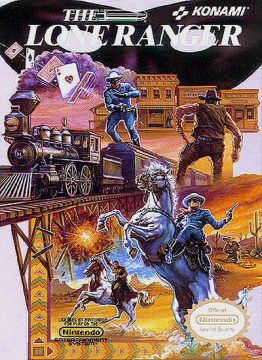 In the later days of the NES, Konami developed a number of licensed games specifically for the American market. Some of these were based on children’s properties, like Monster in My Pocket and Zen: Intergalactic Ninja, but others drew from TV shows like Mission: Impossible and The Lone Ranger. Who knows how Konami obtained some of these properties, especially since they’d been off the air for decades, but perhaps they felt American children could still relate to the story of a masked gunman and his neverending quest to defend the Wild West. 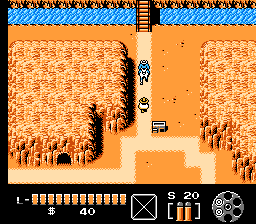 The NES Lone Ranger game is made from the same mold as Konami’s The Adventures of Bayou Billy, by combining multiple genres into a single cohesive game. Instead of being a beat-em-up/driving game/light gun shooter, The Lone Ranger combines RPG elements with both side-scrolling and overhead action, along with first-person dungeon crawling and more light gun shooting. It is, thankfully, quite a bit better than Bayou Billy, which was a halfway unplayable mess, but it still has problems of its own. 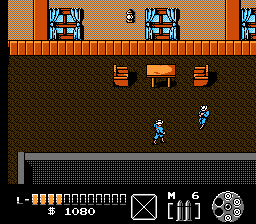 If there’s any game closest to The Lone Ranger, it’s probably Zelda II. Each chapter begins with an overhead map where you can walk from location to location, from towns to mountains to caves. There are visible enemies on the map screen, which will trigger a brief battle with them. When you enter a town, the screen zooms closer and you’re given more control over the Lone Ranger, as you talk to the inhabitants, purchase equipment, and kill the occasional outlaw. Most of the townspeople speak with the grace and intelligence of someone out of Castlevania II, so it’s more likely that you’ll just stumble around until you find the right person to talk to. Once you get your quest – find treasures, kill outlaws, and such – you set off back to the main map screen to continue your quest. 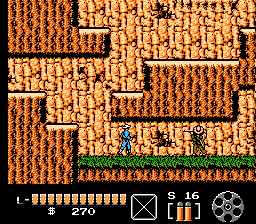 This being the old West, your main weapon is your six-shooter. Ammunition, however, is limited, requiring you to constantly purchase bullets from stores. Every enemy will drop money, so it’s easy to build up a stash of ammo, and you can also use it to buy silver bullets, which cause more damage, or TNT, which is thrown at an angle and causes quite a bit of destruction when it explodes. As the game progresses, you can also buy better guns. As long as you spend a bit of time at the beginning of each chapter killing enemies, you never really need to worry about running out of bullets, unless you’re especially careless. 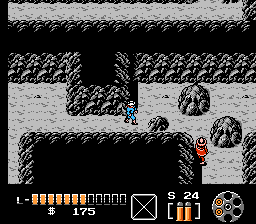 The action segments are split into three distinct types, with the overhead scenes being much like the town exploration. These tend to be difficult because the enemies have a distinct advantage – in addition to their greater numbers, they can shoot in any direction, while you can only shoot in eight. You’re also not a particularly fast walker, making it tough to dodge bullets consistently. The side-scrolling scenes use the same basic controls as Castlevania, right down the awkward stair climbing and distinctive “kneel jump”. You can shoot in almost any direction, which is quite handy, although there are some irritating jumps that require perfect precision. 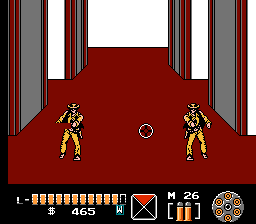 You have to explore mazes in the first-person segments, much like RPGs such as Wizardry. Every couple steps, you’ll run into enemies and need to shoot them down. You can use the Zapper if you’d like, but aiming is also possible with the controller. It’d be too easy if the enemies just popped out in front of you, though. Opponents come from all four sides, indicated by an alarm at the bottom of the screen, and requiring you to turn and face them before they hit you in the side. If you’re playing with the Zapper, that means you also need to have the Control Pad ready and waiting in your other hand. There’s very little room for error, meaning this requires quick reflexes if you don’t want to get completely blindsided. There’s no auto-mapping, but enemy encounters don’t reoccur once you’ve fought them, so if you keep running into baddies, you know you’re heading the right way. 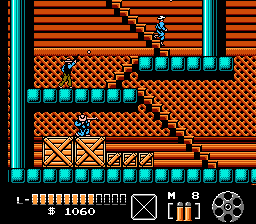 Occasionally the game likes to mix things up a bit to keep it fresh. Most of the battles on the map are fought in the overhead perspective, but in certain areas, it’ll jump to first-person, as you take down enemies while riding on your horse, or change to a side-scrolling view when running and jumping through mountain paths. While each of these three different gameplay modes has its issues, together they create an experience that’s not only ambitious, but keeps itself varied throughout the entire eight chapters. It also helps that the game adds new foes every now and then. You fight against Native Americans in chapter five, and inexplicably, ninjas in chapter six. 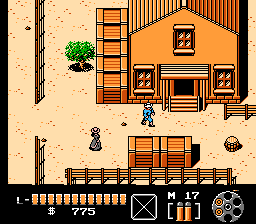 Like Castlevania, it seems like you might have a large life bar, but you really don’t. Running into enemies will drain a single life block, but getting shot will take two or three, and dynamite explosions will sap even more. There aren’t any extra lives, either. Choosing Continue won’t restart you at the beginning of the section; that’d be way too easy. Instead, it sticks you way at the start of the chapter. Given that each part usually has at least two or three segments, not counting the fetch questing or grinding for cash or bullets, that’s a lot of ground you need to recover if you happen to screw up. 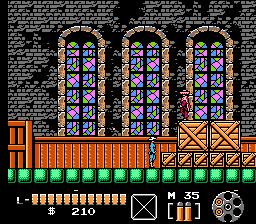 No one would blame you if you simply gave up then and there. Konami games have always been tough, but rarely this unforgiving, and it nearly ruins what would otherwise be an excellent game. While it’s usually best to play NES titles on their original hardware, you can probably make an exception to play this one on an emulator. That way, you can use save states to get around the development team’s stupid design mistakes. 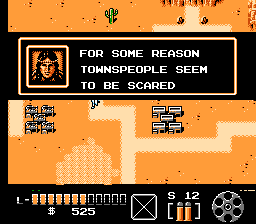 Otherwise, The Lone Ranger is quite an achievement. The graphics are excellent, as is the music. There are quite a lot of tracks, too, including a rendition of the TV show’s theme song, and even a speech sample of the famous “Hi ho Silver, away!”. Overall, it’s one of those almost-classics, underappreciated for perfectly just reasons, but an accomplishment nonetheless.