Rather than porting the arcade beat-em-up, Konami’s NES version of Bucky O’Hare is a completely different game. A side-scroller that shares some commonalities with Mega Man, this game has the extra level of creativity and technical know-how of a Konami game.

At the beginning of the story, four of the game’s cast – Blinky, Deadeye, Jenny, and Willy – are kidnapped and held captive at different locations around the galaxy, leaving Bucky alone to rescue them. You can choose from four planets – a jungle stage, an ice stage, a volcano stage, and an asteroid stage. Once you assemble the entire squad, they all get captured again, leaving Bucky and Blinky to free the rest of them from prison. This takes place over the course of one relatively long level where you fight mind-controlled versions of your friends, before finally making an assault against the evil toads from within their Magma Tanker. 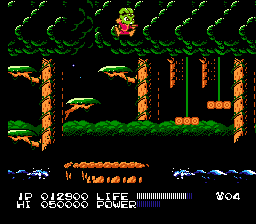 Once rescued, you can switch between any of the characters with the Select button. Each has a unique weapon – Bucky uses a regular gun, Deadeye has a short range three-way rifle, Blinky has bombs that can destroy certain blocks, and Jenny and Willy both have lasers. Each also has an extra ability, activated by charging the attack button – Bucky has a high jump, Deadeye can crawl on walls, Blinky gets a jetpack, Jenny has a psychic energy ball that can be guided around the screen, and Willy has a super laser shot.

Compared to Mega Man, or even any number of Konami games, Bucky O’Hare moves fast, with speedy characters and quick scrolling, an appropriate design for a game starring a rabbit. It’s also very well-paced with tons of variety – each stage is comprised of multiple acts, with different challenges or iterations on previous challenges. In the jungle level, you first fight over some rock formations, leap upwards through a gigantic tree, ride a log through a river, then flounder down a waterfall before meeting the boss. 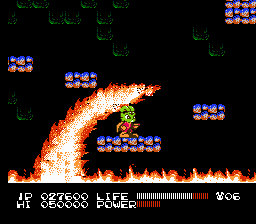 And that’s one of the shorter levels. A few areas recall other 8-bit Nintendo games – the downward rush against a lava stream is just like the laser beam section in Mega Man 2, and the famous disappearing blocks from Capcom’s series also makes a few appearances. The Konami solar flare, as seen in Life Force, Gradius II, and Kid Dracula (Game Boy), even shows up in one level. This is followed by roller coaster rides and a shoot-em-up section at the end.

However, there’s still a feeling that the game isn’t nearly as polished as it could be. For example, even though you can technically tackle the four planets in any order, it’s impossible to get anywhere in the ice stage unless you’ve rescued Blinky, since he’s required to break the ice blocks. Enemy projectiles don’t inflict very much damage, and there are numerous life extensions to be found, which are kept until you run out of lives. Accordingly, most enemies don’t pose a very direct threat. Instead, the game makes up for it with numerous instant death situations. Getting hit by a projectile won’t take much life away, but it will interrupt your jumps and cause you to plummet straight downwards, typically to your death. At least Castlevania and Ninja Gaiden knocked you backwards, so at least there was a possibility of landing on solid ground and recovering. 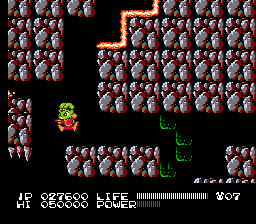 The same goes throughout the rest of the game. Many of the bosses have instant kill techniques, although you probably won’t know this until you’re hit by them. In the ice stage, you need to jump on the backs of snakes that weave back and forth over the water, similar to a level in Battletoads (though thankfully much more straightforward). If you touch their heads, you die instantly. They change directions suddenly, so it’s impossible to avoid death unless you know how they move specifically beforehand, which usually means that you’ve died a few times. In one of the screens, you’re killed almost immediately unless you know to move out of the way.

Even though such trial-and- error gameplay is pretty common in 8/16-bit action games, death occurs so suddenly and so often in Bucky O’Hare that it feels rather cheap and unfair. This is somewhat cushioned by the fact that checkpoints are very frequent, plus even when you do run out of lives, you restart at the beginning of the scene rather than restarting the stage. There’s also a password system in case you get fed up with it and need a break. 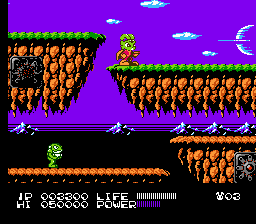 While not as tightly designed as some of Konami’s other efforts – fairly common for their late 8-bit output, which mostly consisted of licensed games – it’s still a pretty decent game. The sprites are very detailed, even though it obviously doesn’t come close to the comic book faithfulness of the arcade game. The parallax scrolling is impressive, and the soundtrack is just as excellent as one would expect from the company, being much peppier and appropriate than the arcade score.

Incidentally, there was a long standing rumor that Treasure was formed by developers from Konami that were part of the Castlevania and Contra development teams. While it’s true that several members from Konami did leave to form Treasure, most of them didn’t have major roles in these franchises. However, the NES Bucky O’Hare was created by many of these team members – it was programmed and designed by Masato Maegawa, the president and founder of Treasure, who had a hands-on role in many of their titles, and the graphics were designed by Kaname Shindoh, who did character art and design on Alien Soldier. Two other members, programmer Hideyuki Suganami and Kouichi Kimura are listed as “Special Thanks”. The frantic rush approach to level design is shared between Bucky O’Hare and some of their later 16-bit titles, though the punishing level of difficulty is uncharacteristic for many of Maegawa’s later games.