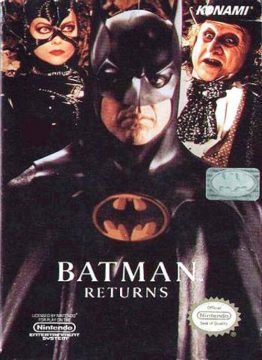 Konami owed so many of their greatest successes to the NES, so they continued to support it up to only a short while before the console’s eventual bowing out. One of their last games was their second game based on Burton’s film. In a lot of ways, the two games are similar, but they’re both just unique enough that they’re both worth trying out. The plot, much like the SNES game, is based off of the film, although this still leads to absolutely nothing being explained if you haven’t seen the film itself. 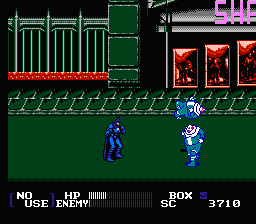 Much like the SNES game, Batman Returns is a beat-em-up that occasionally dips into other genres to keep things interesting. Batman’s moveset isn’t quite as varied as the SNES game, either, so you’re stuck with a basic combo, an air attack, a health-draining special attack, and a slide attack. You still have a block, performed by holding down and B, although it’s generally just easier to dodge everything. You can also still switch out to your Batarangs with the Select button, but in this version, they come in a very limited supply, so they’re not of much use. The overall gameplay feels a little more like the NES Teenage Mutant Ninja Turtles games than Final Fight, although the pace isn’t quite as speedy.

The beat-em-up sections are pretty good, which is fortunate, since they make up far more of the game than the SNES version. They go by at a pretty quick pace, as well, since most enemies only take a couple of uses of your basic combo to kill. The only real problem with with the beat-em-up sections themselves is that it feels like there are a lot of hits that often feel like there’s no real way to dodge them. It’s not that much of a problem, however, since you have a surprisingly large life bar for a beat-em-up, and health refills are pretty common. The trade-off is that you only have one life, but the checkpoints are spaced apart closely enough that even dying won’t set you back much. 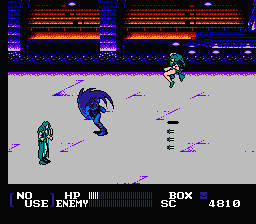 There’s not as much genre changing to be done in the NES version. There are only a handful of sections where you’re moving on a 2D plane, and all so shorts they may as well not be there. There’s also another pretty fun Batmobile segment that takes the form of a scrolling shooter, although it sadly ends a little too soon. Overall, however, it’s a pretty short game, and probably one of the easier games Konami put out for the NES, at any rate. It’s a pretty simple brawler, all told, but it does enough to keep itself engaging the entire way through, which is always an accomplishment for a good beat-em-up.

The game itself has some fantastically done backgrounds, with the color pallete being about as dark and moody as you’d expect from Burton’s film. The character sprites are a little small, but they’re definitely recognizable, and there’s a good deal of enemy variety to keep things interesting. The music take more after a more game-like soundtrack that takes far more after Konami’s usual style, as opposed to the SNES’s orchestral style. It’s an understandable difference, however, and as you’d expect from a Konami soundtrack on the NES, there’s a few pretty good songs in there. 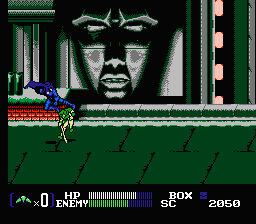 Overall, it’s hard to say for certain whether the SNES version prevails over its little brother. They’re both fine games on their own, although the fact that the NES version is quite a bit easier may make some people lean one way or the other. Either way, however, it’s still a pretty fun game, as opposed to a lot of the many, many inferior game tie-ins the movie actually got.