Before their first brawlers in the arcades, Konami released The Adventures of Bayou Billy for the NES. It’s an interesting experiment in a multi-genre game, but as time passes on, it’s ended up mostly reviled by the internet. You control Billy West, a hillbilly who lives in the swamp who happens to share an uncanny resemblance to Paul Hogan’s character in Crocodile Dundee. Billy has a girlfriend by the name of Annabelle, and like any girlfriend of a beat-em-up player character worth her salt, she is promptly kidnapped by a mobster named Godfather Gordon. Billy then sets off on a rampage across the state of Louisiana to get Annabelle back. This is probably one of the first video games to be set in the state of Louisiana, although it’s… pretty far from being accurate. 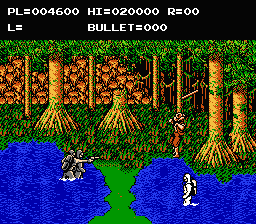 The most interesting thing about Bayou Billy is that the entire game takes place across three completely separate genres, with each level offering one of three different styles of gameplay. Some areas put you in a side-scrolling brawler of the Double Dragon variety, while some are shooting stages that bring to mind Operation Wolf, and still others are driving levels that put Billy in his jeep. A majority of the game, however, is set in the brawler sections, with only a couple of stages each reserved for the two other modes. It’s not a bad idea at all, but what really brings the entire thing down is that the game, even by the standards set by most NES titles, is far too hard. 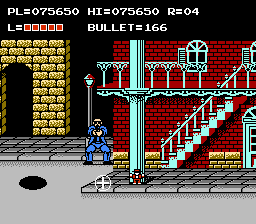 In the beat-em-up sections, you generally wander forward, punching, kicking, or sometimes jump kicking anybody who gets in your way. Unfortunately, that’s more or less your entire move set, without so much as a throw to use. Lack of moves aside, actually fighting whatever enemies you come across generally leads to frustration. Enemies tend to attack too quickly for you to be able to get the first hit in, and even if you do, they recover so fast that they’ll usually counterattack instantly if you don’t move out of the way. In practice, this results in a pattern where you carefully fight one enemy at a time by stepping in, kicking him, and moving away, repeating this for the six or so hits it takes to kill a single opponent. When you’re dealing with two or three enemies at once, however, you’re basically screwed, because if you hit one foe, the other two will hit you right back, with no recourse on your end. 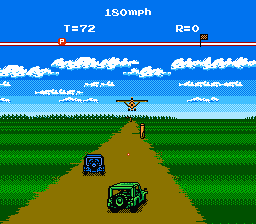 In total, the beat-em-up sections aren’t much fun, and the shooting sections don’t fare much better, either. In these stages, the screen scrolls from left to right, with enemies popping up for you to fire at. You can either use a gamepad-controlled crosshair or the Nintendo Zapper to take out opponents, depending on which of the two game modes you chose. These stages wouldn’t be too bad, either, since you’re given a reasonable amount of time to take each enemy out before they inflict damage on you. The problem is that you’ve got a limited supply of ammo, and when it runs out, you die. 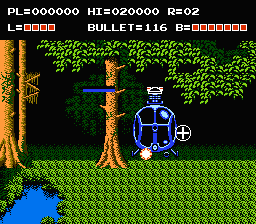 In the driving sections, you’re put in a view behind Billy’s jeep, somewhat like NES driving game Rad Racer. You drive down the road, using your jeep’s machine gun to take out other cars, while throwing out grenades to destroy bomb-dropping planes. Much like the rest of the game, these sections wouldn’t be that bad if it wasn’t for some issue that makes them basically impossible to play through. In this case, a single touch from another car, or even one of the posts on the side of the road, will make your jeep go up like a Pinto, taking one of your precious lives. Given that you only get three lives to a credit, you might see how this could be a problem. 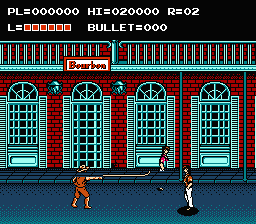 All things considered, Bayou Billy is a game that’s actually three games in one, only each individual experience has some kind of crippling flaw that makes it not very fun to play at all. Just getting through the first stage is somewhat a tall order, not to mention beating the entire game on a limited number of credits, which is massively difficult. On the bright side, the presentation is fairly well done. The backgrounds are well-detailed, and as was standard for Konami, there’s some pretty fantastic music. 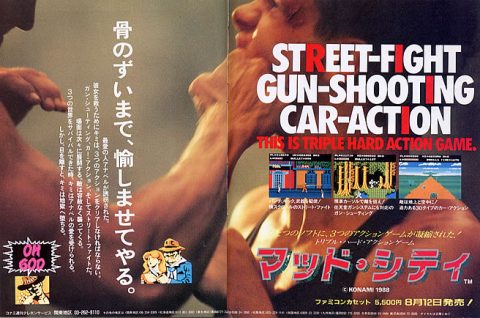 At the least, it’s worth seeking out the Japanese version, titled Mad City. The level designs in the beat-em-up stages are slightly different and some of the background tiles are changed. Enemies in these areas are much harder in Bayou Billy, as they move faster, do more damage, and take more hits to kill. On the plus side, you now get a life meter in the driving stages. These sections are also much faster, with sharper turns and narrowed roads. Further, you can pick up gas cans to either restore health or add to the timer. The status bar is different here, lacking the distance to the end of the stage. In contrast, you get more bullets in the shooting stages. Annabelle’s outfit at the end is also slightly different, and is actually more revealing in the English version, as she wears a mid-riff bearing top and daisy dukes, compared to the red dress in the Japanese version. 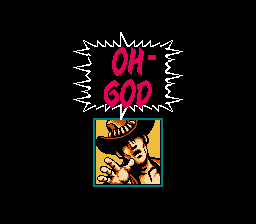 In some ways, Bayou Billy is more polished – the cinema graphics look a little nicer, and there are a few extra sound clips (like “The Adventures of Bayou Billy!” announcement when you start the game, and Gordon’s laughs between stages). Plus the wavy effect of the logo in the title screen is only in the US version. Since it’s so frustratingly difficult, though, Mad City is definitely the preferable experience. 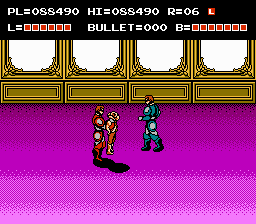 A few other small things were cut out of Bayou Billy, as well. For starters, Mad City featured four different endings, including one where you run away from Annabelle after saving her (triggered by eluding her grasp at the ending), and a silly one written entirely in the Osaka dialect, triggered by pressing Up and Select when Billy and Annabelle hug. A fourth bad ending is also triggered if you still have any items from the training mode. There’s also a quiz mode in the Japanese version, accessed from the title screen and unlocked either by beating the game four times, or getting a game over in any stage but the first and opting not to continue. These ask questions about the game and suggest multiple choice answers, though there’s no way to interact with it. 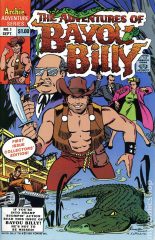 Among other appearances, Archie Comics would bring out a miniseries based on the game, which would rather morbidly add a dead wife to Billy’s backstory. The game was also featured in the generally forgettable 80s cartoon Captain N, where, in the most accuracy to its source material the show had at any point, Bayou Billy was the only game the main character couldn’t finish. 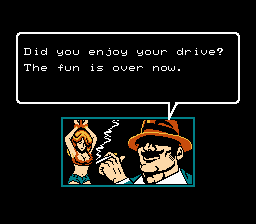 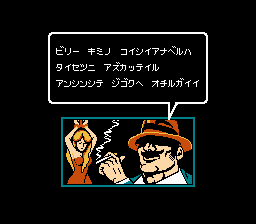