When the sequel to Tim Burton’s Batman came out, it was a pretty huge deal. Although how the actual movie itself ended up is subject to opinion, it was popular enough that it got a storm of games released for a surprising number of consoles. Not all of these versions ended up being that great, but Konami put out a couple of console-exclusive brawlers that are worth checking out. The plot, for the most part, follows directly from the movie. It’s Christmas in Gotham City, and an evil circus troupe descends to bring the city into chaos, because clowns just apparently naturally hate Gotham.

Meanwhile, there’s a newcomer to town by the name of Oswald Cobblepot, otherwise known as the Penguin. Turns out he’s evil. There’s also a rival/love interest for Batman in the form of Catwoman. Surprise! She’s evil, too. The game’s nice enough to have cutscenes in between the stages, although it won’t make a lot of sense unless you’ve seen the movie. Batman is the only playable character, meaning this is entirely a one player show. It’s forgivable, though, since Robin wasn’t really a thing in Burton’s vision of the franchise. 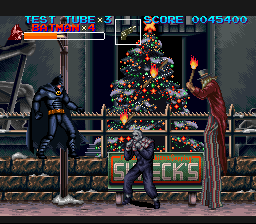 Compared to Konami’s earlier beat-em-ups, Batman Returns plays much akin to something like Final Fight, and it has all the trappings thereof. A special move that drains health whenever it hits something, the ability to grab enemies by walking into them, health bars so big that they change color to signify damage, and all that. For the most part, the standard beat-em-up gameplay works pretty well. There are, however, a few extra moves that make Batman’s moveset a little more robust. The Caped Crusader can block with the shoulder buttons, which reduces the damage he takes. While he’s blocking, he can also use one of his limited supply of test tubes, which do heavy damage to all enemies on screen.

He can also toss batarangs, which stun most enemies for a moment when they hit, as well as use a grappling hook to swing across the screen. There’s also one particularly cool move done by grabbing one enemy and walking into another, where you can grab them both and smash their heads together. It’s tough to pull off, but it’s pretty cool when it happens. The standard beat-em-up gameplay works out pretty well, although it’s not quite up to the standards set by something like Streets of Rage 2. It’s perfectly competent on its own, however, and the game keeps itself interesting. 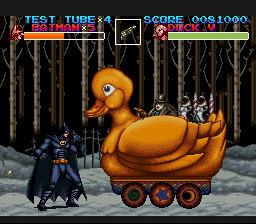 It can be somewhat harsh for a beat-em-up, although never overwhelmingly so. Some of the enemies can do a lot of damage to you at once, and health pickups aren’t particularly common. It isn’t so bad, though, since you have things like the block button and your batarangs to even things out. While you are working with a limited number of continues, the game’s nice enough to put you on the section of the stage you died on, meaning you never lose too much progress at once.

Besides the beat-em-up sections, there’s also a handful of 2D platforming segments. Here, Batman attacks with an unlimited supply of batarangs to attack enemies at range. Unfortunately, these sections aren’t ever really as fun, since Batman’s sprite is just as big as it usually is. This makes a lot of things really hard to avoid, especially when you’re surrounded by enemies. The platforming is a little suspect at times, as well, although the game’s nice enough to give you a grappling hook to cross over pits with. There’s also a particularly cool stage where you drive the Batmobile on a Mode 7 road, shooting at bikers. It’s not particularly long or difficult, but it’s a pretty fun diversion while it lasts. 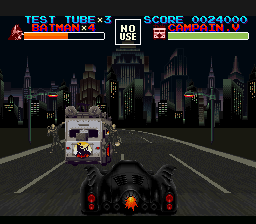 The game does a fantastic job at representing the movie it’s based on, far more than most of the other versions of the game could pull off. The sprites are pretty large, and the color pallete is made up of appropriately dark, moody colors. There’s some other nice details as well, like how you can toss enemies into certain parts of the background, smashing benches and shattering windows. The game even goes far enough to let you re-enact a scene from the movie where Batman uses a grappling hook to pull a loose brick onto a clown’s head, letting you do heavy damage to the first boss. The music’s done in a orchestral style that fits well, too, even using Elfman’s famous theme in a few points.

Overall, there are better beat-em-ups out there, although not many when you’re talking about the Super Nintendo. It’s pretty much the best game based on the film out of several, and it’s a pretty well-rounded package in general. It’s not the most original of games, but it has enough of its own feel and keeps up Konami’s usual trend of staying true to their source material that it’s a pretty good brawler regardless.