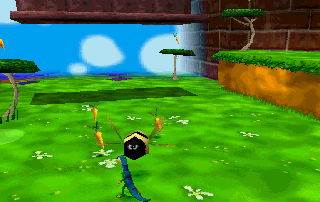 Nearly three years after the first Gex had hit every 32-bit platform in the known universe, Crystal Dynamics finally released a full-blown sequel. Enter the Gecko brought the series into full 3D gameplay, in a move seemingly directly inspired by Super Mario 64 – indeed, if you’ve played that before, this game should prove to be all too familiar. With the move to 3D, the levels have been made somewhat more non-linear, but in the face of this, there are more “missions” per level – similar to Mario 64’s stars, you can revisit a level and find the other remotes, using the meager clue left for you in the name of the level. However, Gex goes the extra mile of actually showing you where in the level the remote is, instead of sending you blindly to find it. This isn’t always helpful, though, and can sometimes even direct you entirely the wrong way. 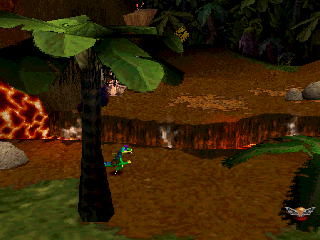 The levels are exceedingly easy to get lost in, especially those that are divided into rooms like the Scream TV levels. Thankfully, the levels aren’t all that big, but the highly restrictive viewing distance presents some navigational headaches. There are two bonus remotes for each level, one Hidden remote which (obviously) must be found in some obscure corner of the level, and one Reward remote, given to you for collecting all 120 collectible items in the level. The layout of the levels doesn’t help these either, and it can be downright counter-intuitive which items in a level will give you collectibles and which will not. It essentially boils down to tail-whipping everything several times over, just to make sure you didn’t miss a single skull/tin can/Jason mask somewhere. The level types very similar to the original game, but now in 3D. Unfortunately the clever level introductions are gone, but the punny titles remain. 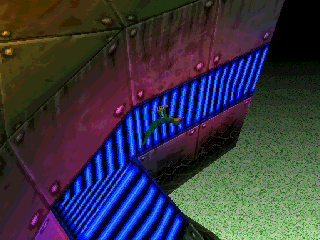 The controls don’t help matters either. Gex can move around at a decent clip, but his ability to cling to walls has now been inexplicably limited to only certain surfaces. He is now able to climb up ledges using his tongue, but like wall clinging, this only works on some ledges and is wildly inconsistent at times – so you really shouldn’t rely on it. Eating bugs is a little easier this time around, though, as the tongue now automatically aims at a bug if it’s nearby. Gex is still able to tail-bounce like in the first game, but doing so now requires you to press and hold the Jump button starting at a certain point of the jump, typically about a quarter of a second before he lands. This is much harder than it sounds, and thankfully the tail bounce isn’t a required move. But then we find ourselves at the ultimate curse of every 3D platformer: the camera system. 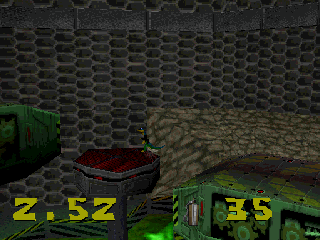 There has been many a potentially good game brought to utter ruin because of an uncooperative (and sometimes even downright malicious) camera. This one is the apex of cruelty as far as cameras are concerned: it’s difficult to control, makes annoying sounds when you play with it, and whatever angle you choose ends up being overridden by the game moments later as Gex passes through any of the numerous fixed-camera zones. Lining up your jumps has never been more difficult, as even if you know where you’re going, the camera could swing around mid-jump, causing the direction you’re pushing to no longer be the correct direction to be jumping. This turns otherwise simple jumps into complete leaps of faith, and pretty much ruin what would be good levels. I consider myself lucky that the game doesn’t have that many bottomless pits, because I have to repeat my jumps enough times that it would only be more painful to have to restart the entire level on account of them. 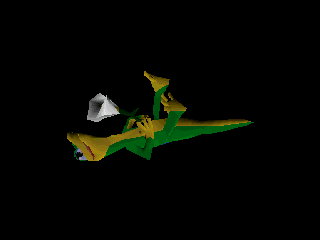 Of course, the game does let you change between Manual, Semi-Auto, and Auto cameras, but doing so doesn’t solve the fixed-camera rooms – it only controls how soon the game will automatically center the camera behind Gex. In Auto mode, the camera swivels back behind you as soon as you stand still – Semi-Auto makes it take a few seconds, and Manual disables this entirely. The camera is a pain regardless of the setting, though, and the option is seemingly only there to taunt you. 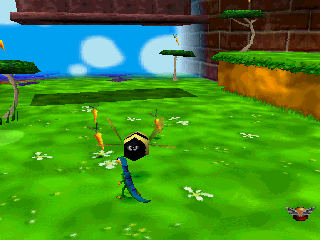 Gex’s lines, again recorded by Dana Gould, get more amusing and varied, but can also get more annoying at times as well. (I swear, if I hear him mention Boy George’s pants again…) But strangely enough, when the game was released in Europe, all of Dana Gould’s original lines were thrown out and re-recorded with British actor Leslie Phillips, known for co-starring in British sitcom Honey For Tea, and as Hactar in the radio version of The Hitchhikers Guide to the Galaxy, among various other roles. The European N64 version uses these re-recorded lines as well. Mr. Philips is far less annoying than Dana Gould is in this installment, that’s one thing for certain, but if you ask me, he’s too cultured to be playing a slacker like Gex… though his lines can also be pretty funny as well (such as his comment upon entering the Cartoon universe, “Ah, to see the world as Keith Richards does.”). It’s really up to the player which voice they prefer, but if neither one works out (because even Leslie Philips brings mention to Boy George’s pants more often than is socially acceptable), the voices can easily be turned off. 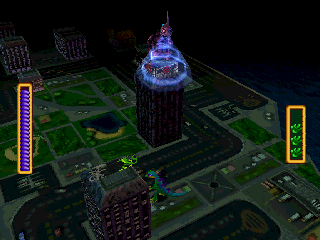 The N64 port was surprising, given that Crystal Dynamics had not previously made a cartridge game – numerous cuts had to be made for the game to fit on the cartridge, though. The full-motion video intro was cut, as was the 3D title menu. Gex’s lines suffered the brunt of the casualties, reducing the sound quality of them so that it’s not always obvious what he’s saying, and also removing so many lines that he only has 5 or 6 to use at a given moment and ends up repeating himself several times per level. Also, a few of the extra secret levels were cut from the N64 release, but in their place has been added a single brand-new mission based on Titanic. As far as I can tell, the Windows 95 release is primarily based on the PlayStation version, and exclusively supported the 3DFX Voodoo video chipset – meaning that unless you have one of those cards (or a good Glide wrapper), they’re impossible to run on modern systems. 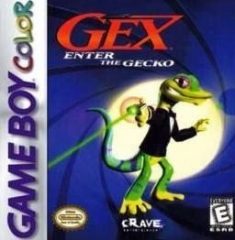 To coincide with the release of the second game on Nintendo 64, Crave Entertainment and infamous GBC developer Harebrained Schemes (also known for their Men In Black and Commander Keen GBC games) decided to also capitalize by making a pint-sized Gex game. Gex: Enter the Gecko plays more closely to the original 3DO game than the sequel, but many elements of its 3D counterpart have been translated to the Game Boy (for better, or for worse). Tail-bouncing, which is now completely mandatory to learn due to it making Gex jump about twice as high as normal, is no longer handled by pressing Down in the air. You must now press the jump button again, with the same touchy timing issues. Gex can hardly jump, and to get him to run takes about half a screen of walking before he breaks into a run. It’s somewhat unpredictable, and with how small the field of view is, this can make situations that were already a leap of faith turn into complete, utter torture. Not to mention half of the jumps you’ll be making are engineered specifically so that Gex will always, without fail, land just short of them every time you make an attempt. Oh, and the controls are backwards from every other platform game on the market: B jumps, A tail-whips. Unless you can get used to that, you’re bound to have some frustration from walking off cliffs. 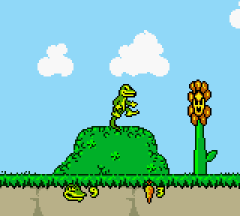 Many of the levels have been recreated in 2D, and despite the layout being redone, it mostly follows the same theme, patterns, and some of the same landmarks. Even the objective remotes remain the same, such as Toon TV’s “Jump to the Teetering Rock” mission. The one thing they didn’t even try to do in the GBC version: the speech. Gex no longer speaks; he is now a mute. And thank God for that – I would not enjoy listening to Dana Gould in glorious GBC sound. At least the graphics are marginally good, even if the developers made them too large and restricted the field of view too much in spite of it. But at the end of the day, this remains a piece of GBC shovelware, and should be treated as such by avoiding it. You could get more enjoyment from, say, Tarantula’s GBC port of Grand Theft Auto. (That’s not intended as a compliment to either game.)