After completely dominating the market for nearly a decade, Nintendo entered a long struggle to properly get its consoles backed by third parties starting with the N64, so it was no small surprise when the Mario factory announced the Triforce, a GameCube-friendly arcade hardware developed in cooperation with former rivals Sega and Namco. As part of the deal, Nintendo borrowed a few of its prestigious franchises to the new partners. Namco co-developed Mario Kart Arcade GP, while Sega put its subsidiary Amusement Vision to the task for F-Zero. Where Mario Kart Arcade GP was a distinct game from Double Dash, the most recent console outing at the time, Amusement Vision built essentially the same game for both Triforce and GameCube. 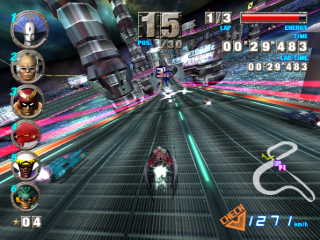 More of the same, prettier, again

You’d be forgiven to expect the creators of Daytona USA and Super Monkey Ball would bring an entirely new perspective to the series, but you’d be wrong. Just as Maximum Velocity was content with retracing the footsteps of the SNES original, the GX/AX duo tightly adhered to the formula established by the Nintendo 64 outing five years prior. It uses the same racing rules, same amount of rounds per race, same booster capabilities and the same melee combat moves (albeit with modified input methods). Contrary to the handheld game, it also fully commits to the F-Zero universe for a reunion with Captain Falcon, Samurai Goroh and all other 28 pilots from F-Zero X. It also features all the known locations such as Mute City, Big Blue and Port Town, which appear graphically fully realized for the first time. 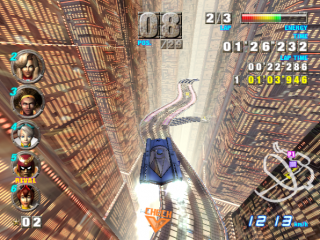 If anything, F-Zero GX is one for the eyes. The ships are modeled in loving detail and even the pilots, whose appearance doesn’t matter at all during the game, are fully modeled 3D characters in the menus and endings. But the most stunning part were the circuits: Before each race, the cameras give aerial looks at the surroundings, with their flying structures, endless skyscrapers and meteorological phenomena like asteroid storms. 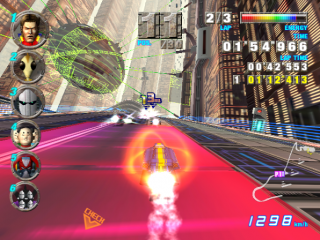 Star Wars was an obvious inspiration for the look and feel – the desert world Sand Ocean even recreates a joke from The Phantom Menace, where ghastly looking alien creatures are consumed by even larger monstrosities when passing by them in the next round, and one of the new planets is basically Endor from Return of the Jedi. There are few racing game experiences more thrilling than rushing through a massive, lava-spitting furnace on a tube, with giant machines presumably processing the molten metal on all sides, or dealing with the ever changing glow of a road made from Tron style virtual reality stuff. 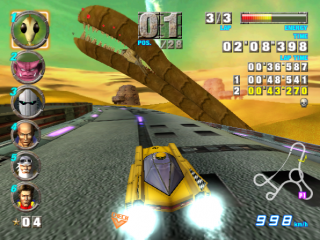 More than any installment before, the GameCube outing loves to feed the illusion that there would be this rich sci-fi world beyond the races. At the end of each cup, the winner is interviewed by Mr. Zero, the commenter seen in the short comic that came with the first game. The player gets to choose from three random questions, many of which are answered with inanity, but the replies also reveal much about the racer’s supposed personality. Nintendo apparently hadn’t noticed yet that it was 2003, and censored a few references to religion and drag in the Western releases. Completing a circuit on the hardest difficulty level is rewarded with an individual FMV ending for each pilot, but most of them are nonsense dances, slapstick numbers at the laundromat, or other silly stuff. 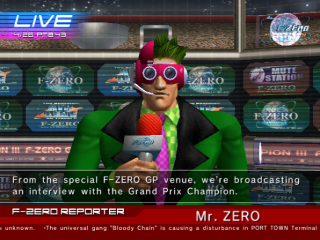 These two universal forces are condensed in each of our belts

F-Zero GX is also the first title in the series to feature a proper story mode, where you follow Captain Falcon on his mission against the various villains of the F-Zero universe. It also doesn’t go a single step beyond that basic premise and apes all the nonsense Saturday Morning cartoon tropes, but it’s neat to have the blanks between the races between this colorful cast filled out just a little bit. 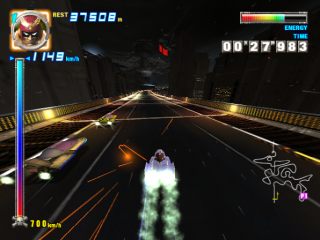 Conversely, the stages that connect the story sequences are not very pleasant. A few of them are standard races, but most are specific challenges on non-circular race tracks. Falcon has to duel Samurai Goroh through a canyon where boulders keep rolling down across the road, rush along a highly populated highway with a bomb on board that goes off when he drops below a certain speed, or make his way out of Black Shadow’s trap before safety gates close in front of him. Each story mission comes in three difficulty levels, and the highest of them is extremely brutal. The story missions offer much frustration, since they need to be cleared to unlock everything, and unlike the grand prix mode there’s no way to “cheat” by pushing rivals out of the race. 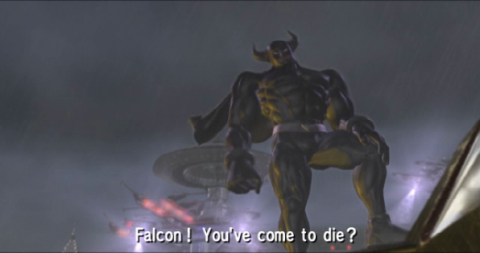 If there is one divisive aspect of F-Zero GX, it’s certainly the music. Amusement Vision opted for a hard techno soundtrack that only occasionally breaks into riffs that pay lipservice to the familiar melodies. It also explores a variety of different genre mixes with a swinging heist movie theme of the Casino Palace and almost metal feeling music in Fire Field. When judged on its own merits, the OST might be the most versatile in the entire series, and it is definitely the most befitting of a futuristic racing game. On the other hand, it is also the least catchy, and very decidedly not F-Zero-like at all. This deviation is a bit surprising in such a fanservice-fueled sequel, but you still can get your fix of the good old Mute City or Big Blue theme – both can be unlocked as alternate choices for the applicable races.

More value for engineers and hackers

As the GameCube relied once again on memory cards with very limited storage space, unfortunately not all of the features found in the 64DD expansion of F-Zero X were carried over. While self-modeled circuits remained a pipe dream for Western F-Zero fans, the sequel at least retains options to create custom vehicles, but the possibilities feel rather limited. Each ship consists of only three parts: Body, cockpit and booster. The program even has an intricate naming scheme to give each combination its unique name. Even though there are 21 models for each, making for more than 9000 possible combinations, you have to take their weight into account when assembling them. Getting a competitive result is harder than it would seem – most possible combinations will just be unplayable, often forcing you to compromise design for even bare functionality. 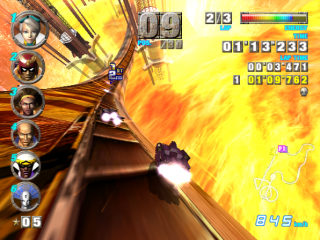 F-Zero AX for arcades is running on the same engine as the GameCube variant, but features a special AX Circuit plus ten new characters and vehicles designed by Sega. Everything from the arcade game can also be unlocked in GX, but the conditions for them are among the hardest challenges in the entire game. Some of the vehicle parts were even only made available in special promotions exclusively in Japan, so the only way to access them know is via Action Replay or Gameshark codes. These cheat modules can also boot the home game in AX mode entirely.