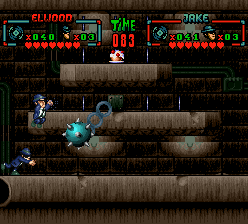 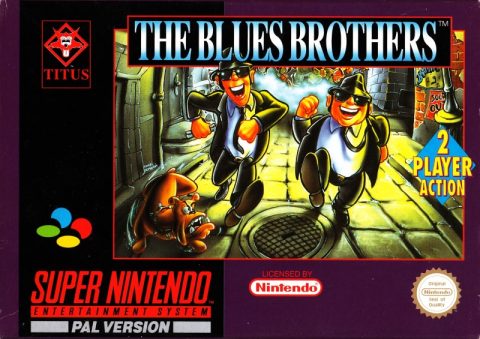 The Blues Brothers: Jukebox Adventure is your typical mid-90s movie licensed platformer. It’s not particularly bad, but also not very good, uses 2nd tier euro style graphics, and of course has nothing to do with the movie safe for the two heroes and bluesy music, which still sounds kinda funky, horribly mutilated as it may be.

Despite the ridiculous story of Jake and Elwood being drawn into a magic jukebox full of trampoline mushrooms, steroid cakes and crazy unrelated enemies like living beartraps and killer robots, this would be a pretty boring entry into our Kusoge column if it wasn’t for its 2-player co-op mode. Whoever thought New Super Mario Bros. Wii was in any way innovative with its multiplayer can go straight back to first grade of Hardcore Gaming school. (Oh, wait! That’s right here!) While the majority of games at the time which allowed co-operative play effectively placed each player on a separate two-dimensional plane (with both affected by their surroundings and enemies but not directly affecting each other), Jake and Elwood can carry their respective brother on the shoulders, bump into each other, and even catch the other’s thrown records (the main weapon in the game) out of the air for ammunition exchange.

Balancing on the many platforms and chains, while a breeze in single player, becomes an almost impossible challenge when Jake pushes Elwood into his death or vice versa each time both try to go on at the same time. On the other hand, they can’t just wait for the road to clear as they’re sharing the same narrow screen. Perfectly timed jumping intervals become a necessity for survival. And that is before the stages turn into such crazy deathtraps that would even drive a single player insane: Factory halls become fatal hurdle races of instant kills. Even the “harmless” enemies might just as well have killed you when they end the brothers’ roided-out form (achieved by eating the aforementioned cakes) when it is the only means to make the next jump towards the finish line. And just wait until you have to ride the dragon. The stupid lizard rushes around the air like crazy until tamed by jumping on its head, and even then remains hard as hell to keep under control. Touching anything while on the back of the dragon causes the borderline suicidal musicians to drop to their deaths immediately. Oh, and did we mention that there’s only space for one on the dragon’s head? 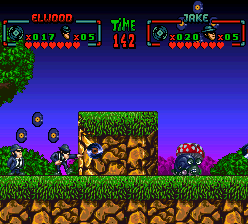 Needless to say, most of the time it’s much more fun to throw your “friend” into enemies or down a pit than actively trying to progress. One’s frustration is the other’s delight. Remember some old games that would drop you back on the world map when pressing Start and then Select? Well, Blues Brothers doesn’t have a world map, so the command just kills. Both players. Behold as whole sessions end after no more than mere seconds because both players tried to be the fastest in screwing over their rival. You die first? Start-Select! Your friend’s being an ass? Start-Select! Your not-so-good-friend-anymore just Start-Selected you? Start-Select! Too bad it’s pointless, since it always kills you too. Unless, that is, you’re the one with one extra life more, then you can Start-Select the hell out of the other player to kick them out of the game and continue alone on the easier path. That’s right, the game even acknowledges how barely playable its multiplayer is by cutting out about half of the levels and replacing some with easier ones.

The best way to experience The Blues Brothers: Jukebox Adventure is on the SNES (it dropped the subtitle on that platform). The Game Boy port, besides having the disadvantage to look and sound like a Game Boy game, doesn’t have the two player mode and is thus completely worthless. The PC version should have it, but be sure to get a copy with a manual, or you’ll never find the keys to activate it. You probably wouldn’t want to share a keyboard with your future worst enemy, anyway.