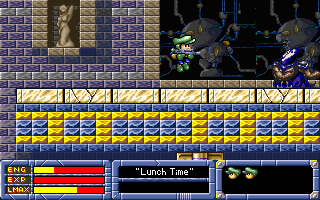 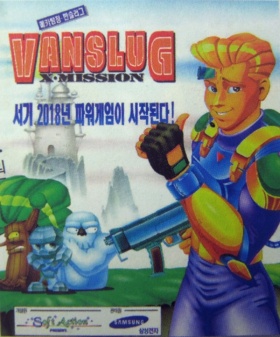 We’ve already covered Vanslug in our expansive Korean games section, where the number of problems was beyond the scope of description. The scrolling is choppy, there’s a lack of checkpoints, shooting diagonally doesn’t work properly against flying enemies, the jumping physics are hilariously broken, and on, and on, and on. Something so broken really deserves another examination.

For starters, on the first screen of the first level the first item you can pick up is a health decrease – it actually makes you weaker! The game is tough without this self-induced handicap though, so you might as well head to the options and immediately bump up the available lives and ammo counter. After this you should also probably avoid any exploration or item acquisition, since several crates contain the health-downgrade item, or otherwise useless junk you never get a chance to use (supposedly there’s an in-game menu where you can use these, but the manual doesn’t explain how to access it). Oh, and the game’s early levels have arrows pointing in the exact opposite direction of the exit – so stay on the path, or rather off the path, as it were.

There’s only a single 1-up in the game that actually functions, since touching the other icons which look identical won’t actually do anything. Collision detection glitch, or cruel programmer humour? Also, each time you collect an item the main character says something inane, including complimenting the player on being Strong Gay! Presumably this is Engrish and was meant to say “strong guy.” Presumably.

The levels are long, awful long, and your ammo stock is extremely limited. In a perverse example of warped designer logic, reaching the boss causes your health to replenish, but your ammo does not, staying at a reduced level even on to the next stage. The bosses are ugly, dull and lazily implemented. The third and fourth bosses are actually just texture swaps of each other! Not only do they attack in the same way, but damaging them is just as cryptic in either fight ?only their torso can take damage, and only slightly before their own attack. Hilariously, pieces of these bosses were used in the backgrounds for later levels.

Before Vanslug the developer, Soft Action, only made shooters, meaning they didn’t have to worry about things like level design too much. As a result, 90% of this game involves travelling along an extremely linear path fighting seemingly random enemies. The final level is the worst. It consists of four floors, each obscenely long (did I mention the levels are too long?), and so similar in design it’s possible to accidentally work your way back to the beginning of the stage and then run out of bullets.

There’s an experience meter, but it doesn’t actually function, at all. Oddly enough, it appears to have worked in the screenshots shown in the manual, which might have improved the game had it not mysteriously ceased working between manual creation and eventual release. See? This is why you need testers and, you know, actual programming ability when making a game.