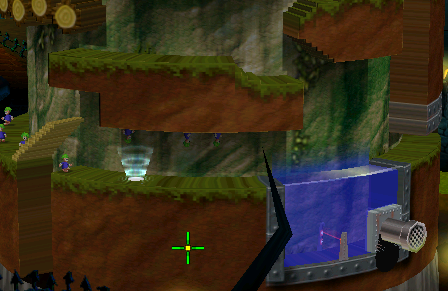 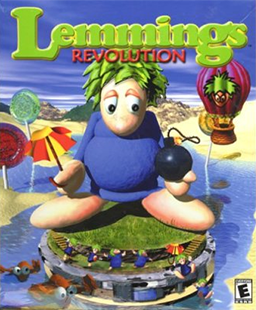 Lemmings Revolution does a better job of utilizing polygonal graphics than Lemmings 3D, largely because it sticks closer to the original formula and is far less confusing. The “Revolution” of the title refers to the cylinder where all of the levels take place. At any given moment you only see about a third of the level, but by holding down the right mouse button, you can rotate the camera around the tower. This fundamentally changes the level layouts, because there’s no enforced side edge to the playing field, so as long as there aren’t any obstacles or walls, the lemmings can walk in circles all day. 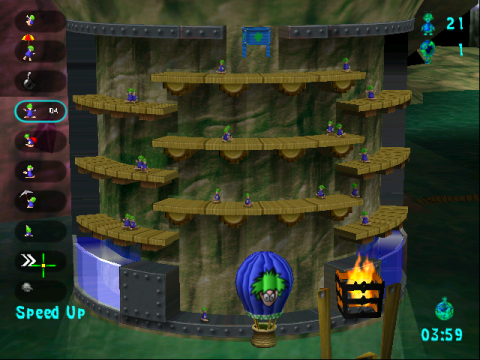 The jobs are the same as the original Lemmings, though there are a few other additions and twists. There are two new types of lemmings – Water and Acid – which, respectively, can walk over each liquid obstacle without getting killed. In some levels there may be multiple types of lemmings, which fall from separate entry reports and require being escorted to separate exits. There are gravity pads, which trigger the lemmings to walk on the ceilings (or flip back to the floor, if gravity is already reversed) and there are a few types of switches and triggers used to open and shut doors, or drain and refill liquid pools. Certain areas also have enemy weasel characters, which knock lemmings off the playing field if they came into contact with them.

The levels are also structured differently. Rather than having different difficulties, the stage select is presented like a sideways pyramid. At the outset, on the left side, there are three playable stages – beating one will unlock the next two stages adjacent on the map. As you continue to the right, the puzzles get harder, though you can always double back to the easier stages if you’re stumped. It works pretty well. There are 102 levels in total. 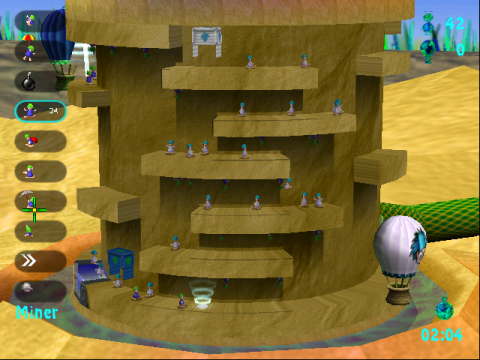 While the cylindrical presentation is unique, the designs and texture sets are just far too limited. As a result, many of the stages feel too samey, especially since so many of them go for the dark swamp theme. None of the levels feel distinct, and everything all sort of blends together even as the stages grow more complex. There are only a handful of music tracks too, and they aren’t particularly good. So, like many of the Lemmings successors, it doesn’t quite better the original game, although some of its ideas are at least better executed than most.