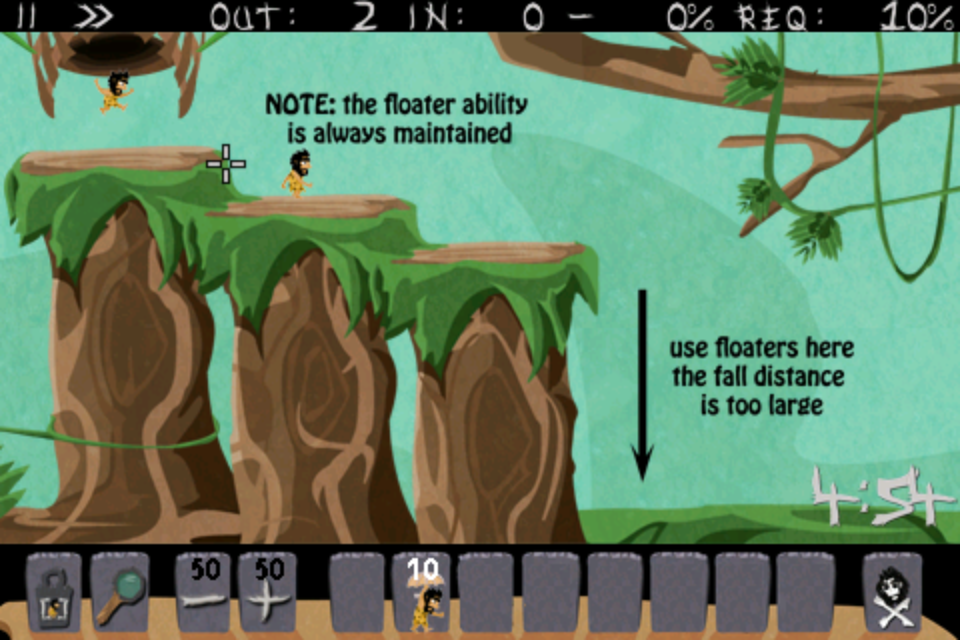 Since the release of the original Lemmings in 1991, there have been an uncountable number of rip-offs of it, all varying in creativity and quality. Some, like Gruntz and Baldies, give it a war-game spin. Others, like Troddlers and The Humans, give you a character you could directly control to manipulate the environment. Even LucasArts’ edutainment branch got into it with Star Wars: Pit Droids, making a game about maneuvering pit droids around puzzles.

However, there are a number of games which aren’t just inspired by Lemmings, but are actually blatant clones. While Sony still publishes Lemmings games for console and portable platforms, there hasn’t been a computer release in the series since Lemmings Revolution. Moreover, smartphones and tablets seem like appropriate venues for Lemmings, yet they remain ignored. Instead, it’s fallen upon third parties to skirt the lines of plagarism to create their own games. 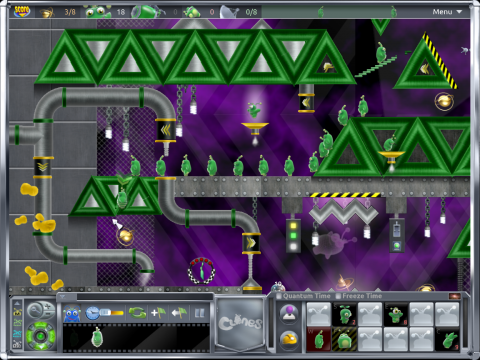 In fact, one is appropriately named Clones. Released in 2010 for Windows and developed by Tomkorp Computer Solutions Inc, it changes the fuzzy green-haired creatures into multi-colored blobs, and it changes the names of some of the skills. There’s no equivalent to the climber, but there are a few new abilities, however, like “clob,” which makes the selected clone toss its head (Don’t worry, it’ll grow back.) in an arc, which is useful for hitting switches. The spin power makes a clone use its antennae to slowly float up into the air until it hits a ceiling. And the atomize power makes it fall apart into bits that can be used to block holes. Rather morbid, that.

While it’s obvious to see where the inspiration for Clones came from, though it’s hardly a full rip-off, since there are so many new ideas. Among them are entirely new game modes that change the way the game is actually played. “Corral the Clone” is your standard “get this many clones to meet your quota” level type, while with “Capture the Clone” you have to guide a specific clone to the goal. In the “Quantum Looper” puzzle type, you get three groups of clones, each with a different set of powers. However, you can only control one at a time, and the trick is that whenever you restart the level, the clone group you chose last time will repeat the same actions at the same time. By coordinating each group and making them do the right things at the right time, you can eventually make it so all three groups can reach the goal. 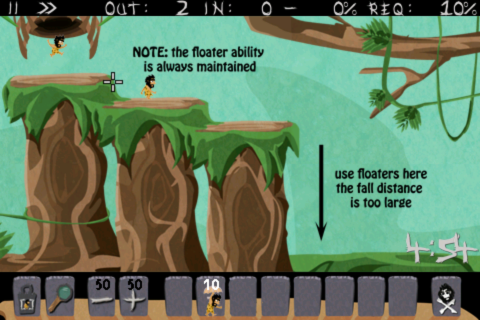 Developed by Mobile 1UP, this game was originally developed and pitched to Sony as a smartphone version of Lemmings. However, Sony was uninterested and they were unable to procure the license, so they changed the graphics to a prehistoric theme and published the game by themselves. Other than the differences in graphics, it’s fundamentally the same game, and even reuses many of its stages. 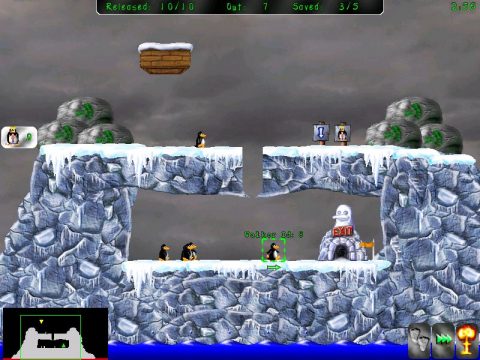 Beginning life as a open source Lemmings clone for Linux, Pingus has been expanded and ported to numerous platforms. The major difference, of course, is that the game stars penguins (based on the Linux mascot) rather than lemmings, and the beginning levels have an arctic theme, though there are other types of stages too, including a factory, a desert, and several Halloween themed levels. The most recent release in 2011, version 0.7, has 77 levels. The major changes include a world map, with some hidden levels to find, as well as some other different skills, like the jumper ability. 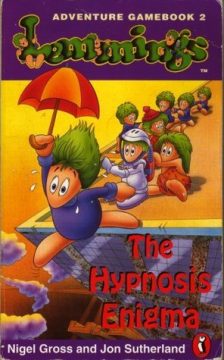 There are two game books based off Lemmings: The Genesis Quest and The Hypnosis Enigma. These are much like Choose Your Own Adventure books. Both released in 1995 and published by Puffin, they have quite a lot of charming black and white artwork contained withing.

There is also a short novel called The Story of the 12 Tribes of Lemmings Island, which was bundled with certain editions of Lemmings 2: Tribes. It stars Jimmy McLemming in his quest to find a medallon and features a number of bad puns. Not terribly good, but it’s certainly amusing that someone took the time to write something like this.