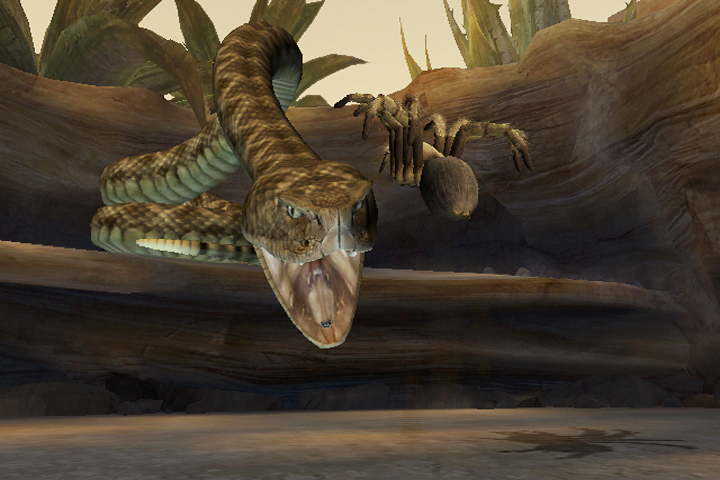 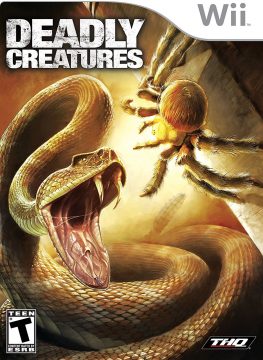 Deadly Creatures, released exclusively for the Nintendo Wii in 2009, is an interesting game. It could be best described as a third-person action title starring a tarantula and a scorpion battling for their lives in the Sonoran Desert. To humanize the experience, the fates of these arachnids entwine with two treasure hunters, voiced by the likes of Billy Bob Thornton and the late Dennis Hopper, in their search for lost Spanish gold. Just as odd as the premise is the fact that the game was developed by Rainbow Studios, a team known near exclusively for working on racing games such as their prolific MX vs. ATV series.

Right from the get-go, Deadly Creatures wastes no time selling its high concept with an eerie start menu. Astonishingly realistic creepy crawlies prowl about and even onto the screen coupled alongside a dark droning tune. The campaign opens with a grungy movie narrated by Wade (voiced by Thornton), laying the groundwork for the downfall of a greedy man, George Struggs (voiced by Hopper), culminating with the explosion of his gas station. The only clue to the fallout is Struggs’ last words, “deadly creatures.” In little over a minute it sets up a foreboding mystery, teasing the player into finding out how the two tiny protagonists could bring about such an explosive conclusion. 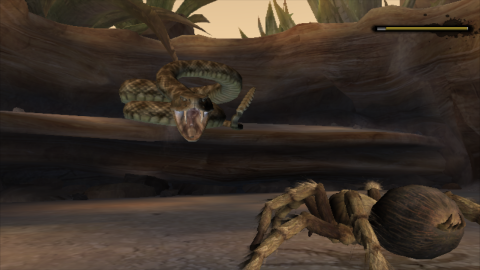 As soon as the first level begins the drop in graphic quality becomes immediately apparent. Jaggy edges, blurry textures, and simplistic lighting hardly highlight the Wii’s strong suits. Nevertheless, what it lacks in fidelity it makes up with smooth, detailed animations. This is particularly evident with the starring characters whose attacks flow from wind-up, execution, and follow-through. Even the simple act of crawling is painstakingly captured in a complex, but fluid motion. Likewise, the environments are meticulously designed to capture the desolate beauty of America’s southwestern deserts and it is only enhanced by the arachnids’ small stature. A series of rocks become a canyon just as a cactus turns into a spiked monolith. Players will also periodically stumble onto human refuse, such as a discarded dollhouse or a crashed pickup truck, making levels feel that much more real and memorable. These moments of exploration and discovery are Deadly Creatures’ best.

However, this is no scenic crawling simulator; each level is teeming with other insects, arachnids, reptiles, and rodents eager to end your bug’s life. Combat encounters are usually unavoidable as the game often spawns them on your path and blocks off any escape. Every now and then though players can flee or outright avoid some confrontations entirely, but the game actively rewards killing creatures with points used to unlock more advanced moves. This along with the elusive leaf crickets, who act as health expansions, push players to scour levels and slaughter every living thing within them. 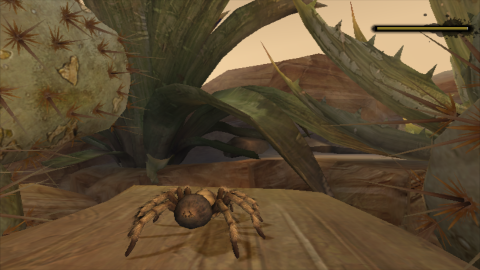 These visceral battles to the death should have been a juvenile dream come true, but they instead become the game’s very own undoing. For instance, the thoroughly crafted attack animations take so long to wind up that they end up leaving the player wide open to enemies who strike in half the time. Sure, one could trigger attacks sooner, but the sore lack of any sort of lock-on feature combined with spry opponents means that the titular “deadly creatures” clumsily whiff all too often. If that weren’t bad enough, simply pulling off attacks is a shot in the dark thanks to the waggle controls. Activating a majority of the arachnids’ special moves involves performing various gestures, typically involving thrusting the Wii Remote in a particular direction. As expected, the game has a tendency to either incorrectly read or flat out fail to recognize motions in the heat of battle, oftentimes met with a punishing blow from an aggressive foe. That means players have to count on finicky motion controls reading correctly on top of hoping that the sluggish animations aren’t interrupted all while praying that their target hasn’t suddenly darted out of reach. Suffice to say, the absence of alternative button-based control styles, such as supporting the Wii’s Classic Controller, is a painfully missed opportunity that could have made combat both more precise and fluid.

Combat in Deadly Creatures is an exercise in frustration and it is made all the more tiresome by its frequency. This perhaps could have been tolerable if the game focused more on exploration, but sadly neither the fantastic art direction nor the off chance to break away from the main path hide the overall linear level design. The game’s ten levels switch back and forth between the two protagonists. The nimbler tarantula’s half are easily the better of the two as its levels have a greater focus on figuring out how to use your abilities to sling through the terrain. On the flip side, the slower tank-like scorpion’s levels devolve into slogs through series of gauntlets. Regardless, all the levels boil down to crawling along the path from point A to point B while constantly being interrupted by combat encounters. On occasion this formula will be broken up by either a boss battle, environment puzzle, or a quick time event. The first two cases are rudimentary, if inoffensive affairs, but the QTEs live up to their notoriety. The punishment for performing the wrong input (or the game failing to recognize it) can vary between a waste of time, a chunk of health, or instant death. 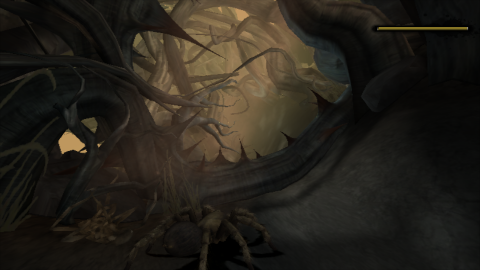 Dying at any point in the game throws the player back to their last save point. This can mean having to replay upwards of seven minutes of gameplay, being forced through the exact same fights, QTEs, and unskippable cutscenes. Players are never too far from death’s doorstep either, especially when facing the larger heavy-hitting adversaries that fill the back half of the campaign. But unforgiving combat, sketchy controls, and aggravating QTEs aren’t all that players have to contend with as Deadly Creatures is, fittingly enough, a very buggy game. The framerate chugs when too many enemies appear on screen, making combos even harder to perform. The camera can flip out when climbing up walls or get stuck on objects entirely. Adversaries or the player can clip through, get stuck into, or fall through levels entirely. And in one instance, crucial enemies needed to advance the level failed to spawn entirely, forcing a restart. Getting tossed back to the last save due to glitches completely outside of the player’s control exasperates an already trying game.

What about the story? Does the celebrity talent touted by the game’s prerelease press, packaging, and in-game interviews hold any weight? Ultimately, neither leave much of an impression. Hopper and Thornton’s recordings are fine enough, but their talent is squandered on a script that fails to do much with them. For the first half of the game, players rarely catch glimpses of the duo or overhear them prattling in the background between long stretches of gameplay. It isn’t until the final third of the game that the human storyline intertwines the arachnids’ and even then the story never pays off as much as the setup would have you believe. It’s also in these final moments of the game that it becomes painfully clear that the developers had either run out of time or ideas. The last two levels in particular are substantially shorter than the ones leading up to them, feature no new special moves to unlock, spam the same enemies from before, and conclude with dull boss battles.

Deadly Creatures is a disappointment. Its shining moments of crawling through a gorgeously realized world from a unique perspective rarely explored in video games is buried under poor controls, lackluster design, and glitches. Whether it be the fault of an inexperienced studio or a lack of funds from the then-ailing THQ, it is a hard game to recommend. It stands as a curiosity, best experienced in its opening moments and left once it begins to wear.