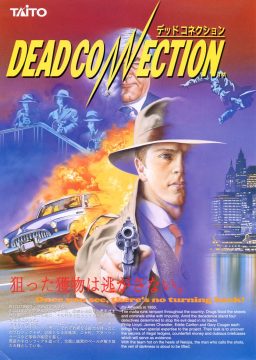 Taito’s Dead Connection is a surprisingly fresh and fun take on the arena shooter genre, something that arcade goers saw plenty of in the early 90s. It styles itself after a gangster movie, and takes some heavy inspiration from movies like The Godfather and The Untouchables. In that sort of facial plagiarism that seemed to be all over games of the time, the bad guy even looks just like Marlon Brando. It’s an interesting theme, and not one that was explored all that often until more recent games like Mafia.

While the bad guy is basically the Godfather, the story’s taken right from The Untouchables. In the year 1953, in “a big city somewhere” (it might be New York, considering that there’s a level in Central Park), some guy named Nerozzia is being a jerk. The intro tries to style itself after an old noir movie, complete with a shot of a lady (presumably the loved one of one of the playable characters) getting dramatically gunned down. It’s a pretty nice intro, even with somewhat goofy lines like “They begin fighting, keeping anger in their heart”. There are also cutscenes between stages to explain where you’re going and why, but other than that, the focus is more on the action. 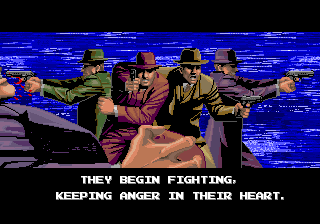 There are four selectable characters for up to two players, but the only real difference between any of them is the color of their trenchcoat. Once you choose your character, you’ll begin an eight stage journey to destroy Nerozzia and his operations. This is accomplished by killing almost everyone involved, and while not very legal, it’s actually pretty effective. Each stage will give you a certain number of enemies to kill, and once the enemy counter hits zero, you move on to the next stage. While in the first stage, you’ll only have to kill 30 enemies to advance, by the final level, you’ll have to kill a total of 75 foes to finish the game. Thankfully, the mob is nice enough to send guys out in waves, only bringing in more once you finish off each group.

You control your character with a joystick, with one button for shooting, and another for crouching. You can also whack enemies with whatever gun you’re holding by tapping the fire button when they get close. Holding down the crouch button while you’re idle will make you go prone, which can help you avoid shots that come too close by. Hitting the crouch button while you’re moving, however, makes you do a dive in the direction you’re pressing, which, while making you temporarily invincible, can also put you in a world of hurt if you dive into something dangerous. Diving can also be used in a pinch to tackle enemies, although this won’t do much good against anything besides standard mooks. 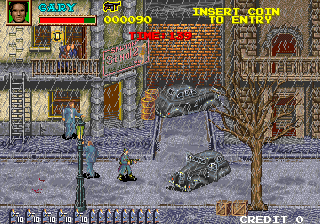 Pretty much all of your opposition will be men with guns. Most enemies go down with a single shot, although there’s the occasional boss-type enemy that takes a couple dozen or so bullets before they’ll finally fall. Most enemies will blast you from a distance with machine guns or pistols, although a few of them will come at you with knives and axes. While most of the enemies are pretty weak, your player character is surprisingly durable, and you can take quite a number of hits before dying. The trade off, however, is that you only get one life per credit, which is still manageable. The game’s even nice enough to drop the occasional hot dog for extra health.

You start off with a pistol, and given how easy most enemies in this game are to kill, it’s actually pretty useful. There are a few other weapons to use on your foes, however, like machine guns and shotguns. These are generally more useful against bosses, who can take a lot more punishment, but you’ve got a limited amount of ammunition to work with. When you run out of ammo, your character will chuck the gun out of their hand with a “Damn it!”, which is a nice touch. 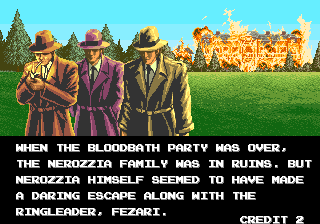 Where Dead Connection really shines, however, is the level design. Unlike most arena shooters that stick you in a flat space, Dead Connection’s levels actually have an amazing amount of depth and interactivity for the time. For example, the first level takes place inside a fancy hotel. You can shoot up the candlesticks on the tables to set them aflame, destroying them, or you can move up the stairs to a higher level, giving you a good vantage point to shoot thugs at while leaving you free to leap down to the ground.

The highlight is the factory stage, where enemies take shots at you from a catwalk, conveyor belts move things around, and there are shelves to knock over onto enemies. There’s even a lever you can pull to drop a crate onto the poor fools who happen to be below. Not all of the levels offer this much interactivity, but they all have multiple heights, along with things to hide behind for protection. 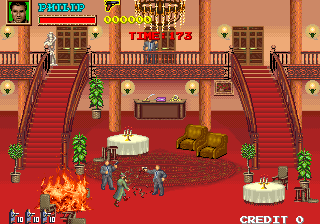 The stages also offer an incredible amount of destructibility, which makes the game look fantastic. In the first level alone, tables can be lit on fire, chairs can be shot to bits, and even the chandelier will fall to the ground and get smashed to pieces. Not even the background is safe, as stair railings can get shot to splinters, pillars can be left with huge cracks, lights can be shot out, and doors can be blown right off of their hinges. Not everything you destroy will have any effect on the gameplay, but there’s so much attention to detail put into every level that you can’t help but blow just about everything up just to see what’ll happen. There are also a few other nice touches, like the bystanders who will quickly make themselves scarce soon after you start shooting. You can’t attack them, so don’t worry too much about aiming.

The characters are pretty small on screen, and since almost every enemy and all of the playable characters are guys in suits, it’s not always easy to pick them apart. They’re all animated very well, and there’s almost just as much love put into the enemies as the environments. Shoot a guy so he’s knocked up against a wall, for example, and he’ll actually slump against it, which is a detail you almost never see at all in games from this era. Dead Connection does a great job of replicating an old gangster movie with its use of color, the clothes people wear, and the environments you can shoot up, which really helps make the game unique. The music’s pretty jazzy, too, which fits in well with the noir style. There’s also a decent amount of voice acting, as well, and while there are some questionable lines like “Don’t return them alive,” the acting is surprisingly decent. 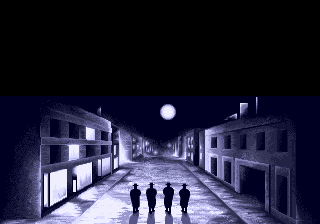 Overall, Dead Connection is a game that deserves so much more love than it’s received, especially compared to games like Smash TV. It’s the pacing that really sets it apart from Williams’ more famous take on the genre, since it will only take you about 30 minutes to finish. By that point, you’ll still be wanting more when it’s all over, the telltale sign that you’ve got a classic arcade game. For whatever reason, Taito never released it on any of their numerous compilations, meaning that you’ll have to use MAME to experience this game.