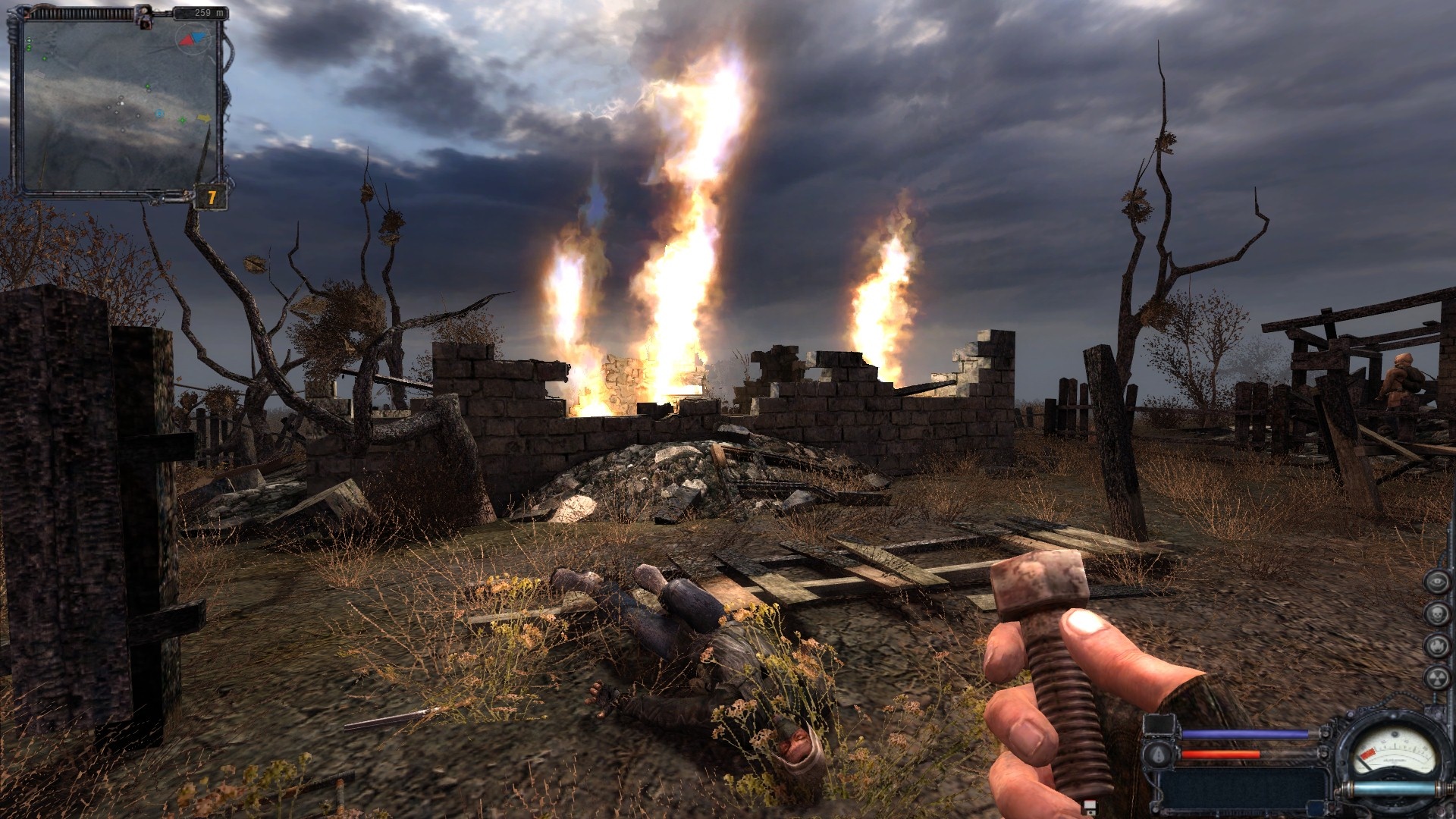 Interviewer: What’s the one thing you would have liked to have included [in SOC] but that didn’t make it in?

Anton Bolshakov: The dynamic [use of obstacles] by AI; NPCs throwing grenades; a more developed system of relations with factions, community; more developed factions as they are and their actions in the Zone; the possibility to play for the factions.

Clear Sky is the black sheep of the S.T.A.L.K.E.R. series. It has a bad reputation as being buggy, as well as a detour from themes and gameplay elements core to S.T.A.L.K.E.R.. “CODlike” is the word from the modern vernacular which S.T.A.L.K.E.R. fans often refer to Clear Sky by. For all the innovations it brings to the S.T.A.L.K.E.R. table – Artifact detectors, RPG-like upgrade systems, advanced AI, and engine improvements, people only remember the broken faction system, the tunnel-like level design of the second half, and the bugs. From developer pre-release videos and interviews it is clear that GSC were full of ideas for Clear Sky but it had a fairly short development time and was pushed out before many of these ideas were properly or appropriately realised. When accepted for what it is Clear Sky is not the complete failure it is often portrayed to be.

Clear Sky functions as a prequel to the story of SOC. The player character is a mercenary named Scar who is given the task of stopping the main character in SOC from reaching the centre of the Zone. Like the novel plot of the Half-life expansion Opposing Force, the player is fighting against their own interests from a previous game.

Combat is where Clear Sky shines somewhat over the other S.T.A.L.K.E.R. games. Clear Sky is very clearly designed around human-on-human ballistic combat. Every area in the game, even the ones repurposed from SOC, has structural features which are conducive to great gun battles. Low walls (don’t worry, there’s no snap-to cover), barrels, and abandoned cars skirt important strategic locations. The AI now effectively uses tactics to thwart the player. Enemies flank, use cover, and throw grenades to keep the player on edge. The combat is much harder than SOC‘s, making a quicksave before a fight almost necessary, but this just means resolving a tactical “puzzle” rather than playing through a linear sequence again and again. Clear Sky is at its best when in the thick of its layered, tactical combat.

The bleeding system now works properly in Clear Sky, wounds need to be instantly bandaged otherwise the player will start rapidly losing health. Bandages are in short supply and time is needed to apply them, making fights more intense and challenging. Enemies are not immune to bleeding and can run away and die if they don’t bandage themselves. Enemies also flinch when shot, a small change but one which stops them from firing, adding a tactical element to damage.

Clear Sky‘s main addition to the S.T.A.L.K.E.R. toolset is anomalous artifact detectors. These are items that, when equipped, indicate the presence of any artifacts in the area. Cheap detectors just “beep” when artifacts are very near, but rarer, more expensive detectors are complex, some pointing towards the artifact, others showing a GPS representation of the anomaly. Artifacts in Clear Sky are not found in random locations like in SOC but in anomaly fields. These fields are extremely dangerous and have background elemental damage as well as classic anomalies that can kill the player if they don’t use bolts. This makes artifact hunting more interesting and selling them for profit more viable as they respawn in the same fields slowly over time.

Another addition to Clear Sky is the weapon repair and upgrade system. Every weapon can be upgraded by special NPCs by selecting upgrades on an “upgrade tree’. Decisions have to be made as to how the player wants to use the weapon as some upgrade options lock out when others are committed to. For example, the player may want to make their AK-74 fire faster with an extended magazine of 40 bullets or be able to attach a scope and make the weapon very accurate, but both builds cannot be achieved on the same upgrade path. Weapons can be upgraded to support various attachments such as silencers, scopes, and grenade launchers. Suits can be improved immunity-wise, and players can add increasingly advanced night vision to more expensive suits. Clear Sky handles artifact carrying differently than SOC. All suits have a varying number artifact slots. More slots can be added through upgrades. The upgrade system adds further tactical choice to a player’s loadout, as well as potential consequences.

NPCs are now well trained in the finer points of grenade throwing; something that was left out of SOC and sometimes it can be seen why. Enemies will throw perfectly aimed grenades one after the other, not only that but they have a very short fuse. There is a hud indicator that points out nearby grenades, however, most players will find grenade deaths just cheap rather than genuinely challenging especially in the latter stages of the game. In fact this cheap type of difficulty is present in the beginning of the game. After exiting the swamp the player is faced with getting out of the way of a machinegun emplacement. Getting hit is instant death and unless the exact path past is known, advancing can seem impossible. There is also a certain early plot event which strips the player of everything they had prior to triggering it leaving them with nothing to show for however long they spent fighting the bandits in the swamp.

A game mechanic introduced in Clear Sky, the central theme in fact, is the faction system. Basically each map has two factions fighting for territory. In the swamp area for example, the Clear Sky faction and the Renegades are in conflict for control of the area. The map has pre-ordained nodes or capture points and NPCs attack or defend said nodes accordingly. The player can join factions and when close to a fight they will call them for help. Allies back up the player and say they will attack on their first shot. Each faction also has a base where, depending on your affiliation, the player can receive quests, upgrade equipment and buy supplies. The faction system has many drawbacks that limit what the Player can do. For instance, the game forces them to holster weapons at all bases which means the only means of attacking an enemy base is when the AI wants to. Unfortunately the AI is usually either completely lethargic or suicidal in its approach to attacking. Once an area is taken over, the defeated faction will only spawn in a couple of places and never present a realistic threat to already established faction hubs. The whole system is not balanced very well and becomes completely one sided and static after awhile. Another unwanted feature of the faction system is that every NPC is now represented as a dot on the map, even the mutants. This takes all the surprise and fear out of exploration and combat as most of the danger derives from not knowing where a threat is going to approach from. The faction system is mostly a half-baked mechanic and is one of Clear Sky‘s worst failings.

Clear Sky exhibits a far more impressive X-Ray engine than the running SOC. Graphically the engine has been improved with advanced lighting effects, including “god rays” – Shafts of light emanating from the sun, filtering through trees and windows. There are also depth of field effects which manage to neither be irritating nor disorientating. The effect is mostly visible when focusing on reloading a weapon and makes the loss of perfect vision a cool trade off. These visual upgrades make Clear Sky much more system-intensive than SOC and a large framerate difference is to be expected between the two games. The sound design is also greatly improved; the player will notice the sound of rustling leaves and grass before seeing an approaching mutant boar for instance. There is also more voiced dialog than in SOC.

While the first two thirds of Clear Sky has fairly open environments, the last stretch switches to being essentially a corridor shooter where you follow groups of allies through nests of human enemies including a large-ish town called Limansk and a ruined soviet underground hospital. Although these locations are interesting visually, they don’t provide much in the way of tactical options in how to approach the enemy. Even though the fights are fairly straight forward they never get boring and can be likened to Half-Life‘s battles with the Marines. One highlight is a pitched fight with Monolith soldiers on a construction site of a gargantuan radar array. The ending of Clear Sky is a novel reworking of the CNPP level from SOC but largely disappoints gameplay and story-wise and is very frustrating unless the player knows what they are doing. Clear Sky is made up of leftover levels from SOC and entirely new ideas probably due to its fairly short development cycle; because of this the game feels quite disjointed.

I should mention that there can be a big game-stopping crash as you enter the town of Limansk. This can be avoided by running forward into the ambush and ignoring the NPCs to the left. I was stuck there for months before I found this out. I will also mention once you cross the drawbridge preceding this section you can never get back so be sure you are ready and have done any quests you’ve left undone.

Weirdly pistols have no iron sights in Clear Sky and merely zoom in. Whether this was a conscious design decision or an oversight (SOC had them), it is easily modded for those who prefer to play without crosshairs.