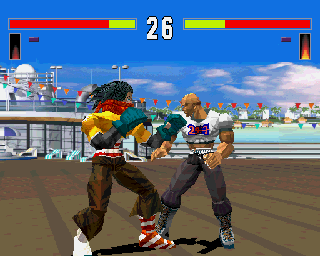 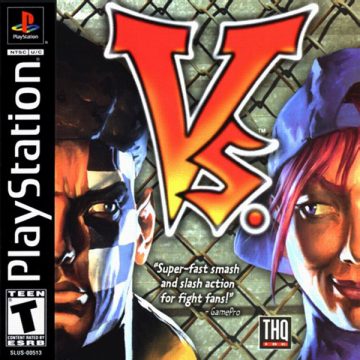 Even though Fighters’ Impact was never released overseas, someone at THQ took notice and decided that it could use a drastic tailoring for western tastes. Presumably THQ had their own people come up with the general design of the game, which was then put together by the developers at Polygon Magic over in Japan. The result was the nigh ungoogleable Vs., which failed to make much of an impact and fell into obscurity. 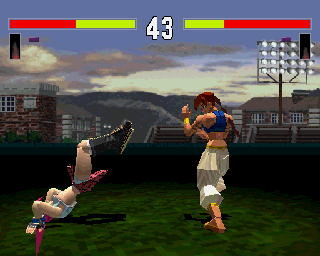 Fortunately, we were able to contact the game’s character designer, Kurtis Fujita, who very graciously agreed to provide additional insight to the development of the game.

Vs. was intended to capitalize on the Fighting game craze of the ’90s. THQ actually took the engine from a Japanese fighting game (can’t recall which one) along with all the character animations and in turn had myself design a new set of characters which Polygon Magic modeled. In essence Vs. was an overhaul of a previous game. I believe Polygon Magic and I had about 6 months to complete the project. It was quite rushed. I would work on one set of designs while the previous set was being modeled in Japan by Polygon Magic. Perhaps because it was an overhaul of an already released Japanese game, it was deemed only for a U.S. release, however I am not certain. The main idea and theme of Vs. was to create a game which had characters that Americans could identify with, while still maintaining the visual flair of Japanese Anime and Manga.

To be more precise, the game was given a street gang themed makeover. While this may come off as cynical pandering to 13-year old boys, it does give the characters some sense of identity compared to Fighters’ Impact‘s generic martial artists. Despite the hasty development schedule, the roster is fairly large. Unfortunately, a lot of the characters share entire move sets and are thus identical gameplay-wise.

Gang: Streets
Occupation: Rave D.J.
Fighting Style: Baguazhang
Probably the closest thing the game has to a mascot character. Has some breakdance moves in addition to the basic baguazhang moves from Fighters’ Impact.

Gang: Streets
Occupation: Club kid
Fighting Style: Kung Fu / Aikido
Although all of the fighting styles in the game are more or less tweaked versions of what Fighters’ Impact had to offer, Vikram’s kung fu/aikido mishmash is among the fresher ones with its mix of fast strikes and counters.

Gang: Streets
Occupation: Cab driver
Fighting Style: Wrestling
Oleg appears on the cover art along with Mia, wearing an ushanka to prevent any confusion as to just how Russian he is.

Gang: Beach
Occupation: Surfer
Fighting Style: Free Karate
Of course Vs. has a Bruce Lee clone too, complete with a Game of Death color scheme for his 2P outfit. This one’s a surfer, though. He has a neat win pose where he balances on the ground surfboard-style while the camera shifts as if rocked by waves.

Gang: Beach
Occupation: Street mime
Fighting Style: Aikido
Unfortunately, Mineo just uses the basic aikido moveset instead of pretending to be trapped in invisible boxes. The man has no respect for his art.

Gang: Beach
Occupation: Tattoo artist
Fighting Style: Baguazhang
Her style of baguazhang is actually lifted from Fighters’ Impact‘s Faraha, and her 2P costume is an oriental outfit similar to hers.

Gang: Campus
Occupation: Cheerleader
Fighting Style: Martial Arts
Has a groin kick move. This is mentioned because there’s a bizarre YouTube fetish video tributeto it, proving that at least someone found the game enjoyable in their own way.

Gang: Hood
Occupation: Rapper
Fighting Style: Street Fighting
His 2P costume gives him a painfully ’90s alternawhatever look and a Pop Will Eat Itself t-shirt for no obvious reason.

Gang: Hood
Occupation: Shrimper
Fighting Style: Taekwondo
Thana is completely indistinctive. He’s almost a Bruce Lee reference with his high-pitched yells and jumpsuit, but the game already has a proper one.

Gang: Hood
Occupation: Mechanic
Fighting Style: Street Fighting
There isn’t much to say about Paco, either. If the game had an actual story, his would probably deal with raising fight money to restore a sweet vintage hot rod. As it is, though, he’s just an angry guy with an unfortunate haircut.

Gang: Bosses
Occupation: Gangster
Fighting Style: Street Fighting
He appears as the final opponent of the Streets gang’s challenge mode. Even though they are hidden bosses, the characters in this gang play exactly the same as anyone with the same fighting style.

Gang: Bosses
Occupation: Enforcer
Fighting Style: Kung Fu / Aikido
He appears as the final opponent of the Streets gang’s challenge mode. Even though they are hidden bosses, the characters in this gang play exactly the same as anyone with the same fighting style.

Gang: Bosses
Occupation: Jock
Fighting Style: Taekwondo
While everyone else takes on a tough outlaw as their final boss, the Campus gang has to deal with a jock. This is probably par for the course for any gang that counts a disheveled old school principal among its members.

Gang: Bosses
Occupation: Biker
Fighting Style: Street Fighting
The final boss of the Hood gang. Carries a shotgun on his hip, but it’s only for decoration. Sort of looks like Jagi from Fist of the North Star. 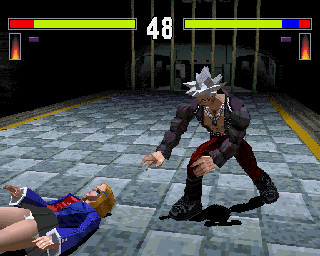 As Character Designer it was my duty to create the designs for all the characters, as well as their costume designs. I would also come up with many of the victory poses and all the names for the characters. Some of the characters were my ideas from scratch. On other occasions, I was given a couple word descriptions. For instance, I was told to make a Russian Cab Driver, this became Oleg. The Taxi Driver elements were the yellow jacket and the black checker war paint on his face, mimicking the colors of a Taxi Cab. I was definitely inspired by the various fighting games of the day, Street Fighter and Tekken, however I tried to expand on the themes already made and come up with original solutions to the tried and true fighters already seen. As usual it was important to have a strong female character. Instead of having the typical Chun-Li like girl, I chose to make our female Kung Fu practitioner, the Rave Dj, Mia with a more street wise attire than normally seen in Fighting Games.

As you may have noticed, all of the characters (such as basically the entire Campus gang) don’t fit into the street thug theme all that well. Fujita explains thusly:

In regards to the various designs. Initially I made quite a few designs on spec wherein I had free reign, without the knowledge of the Gang Theme that would become an integral part of the Game. Characters like Harold were prime examples of this. These characters were later placed in to different Gangs that may not have directly related to them at first glance. In the case of Harold, I created him to be the ultimate Martial Artist. The blindfold he wore was originally to lead you to believe he was actually blind. However, my intention was for him to take it off at the end of the game revealing he could in fact see. The only reason he wore the blindfold was to provide a challenge in the competition as he was much more highly skilled than all the other competitors. When it came time for them to place him in a gang, THQ chose the Campus Gang and dubbed him the “New Zealand Exchange Student”.

The controls are similar to Fighters’ Impact, with a new special attack button. The specific purpose of the special attack varies between different fighting styles – the taekwondo guys go into a one foot stance, aikido practitioners perform painful counter grabs and almost everybody else does slow power attacks that stun the opponent and leave them open for further combos. The motion slide combo system is not present, though many characters have remarkably loose combo chains.

Most characters can use the sidestep counter system from Fighters’ Impact. This time, throws can be escaped as well. However, the ground game is even more limited, with absolutely no evasive rolls or rising attacks – it is possible to tech out of falls and simultaneously kick your opponent in the face by pressing the evade button before hitting the ground, but that’s about the extent of it.

Visually, the game is very similar to Fighters’ Impact, right down to recycled character animations. Strangely enough, a few of the characters (namely Oleg, Mineo and Kara) have distinctively crude facial textures with malformed cartoon eyes. As for the music, THQ opted for licensed tracks from bands Razed in Black, Suicide Machines, Los Infernos and Pigs in Space instead of original compositions. It’s an odd mix of goth-industrial, punk and ska but it ends up complementing the fighting action surprisingly well. 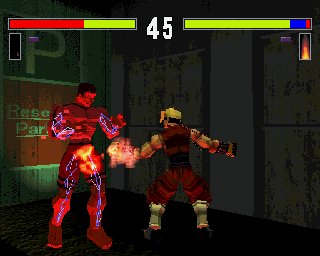 Maybe the biggest problem with Vs.‘s gameplay is that it feels unfinished and inconsistent. Nothing really gels together and the fighting styles end up feeling like they’ve been taken from entirely different games. The closest thing to a fleshed out single player mode is the challenge mode, where you fight everyone within a gang for a chance to beat and unlock their respective boss character. However, there are no actual endings or any other form of narrative. The rumble mode where two gangs fight for turf is theoretically interesting, but functions as a generic team battle mode.

To put it bluntly, Vs. is subpar. But at the very least, it’s still an interesting example of a game getting entirely refurnished for the western market.