With Dragon’s Lair being a monumental success, it was obvious that a follow-up was in order. While not a direct sequel, Space Ace played almost exactly the same as its predecessor, with a few twists. Whereas Dragon’s Lair was based more or less on medieval fantasy, Space Ace took on the appearance of a science fiction B-movie serial.

The plot follows the adventures of Dexter, an intergalactic hero who much prefers to be called by his nickname “Ace” (voiced by Jeff Etter from Bluth’s animation department), and his girlfriend Kimberly (voiced by Lorna Pomeroy, another animator and producer John Pomeroy’s wife), as they attempt to stop the evil plans of the nefarious Borf (played by Don Bluth himself), who has invented a device known as the Infanto Ray, a laser cannon that turns whoever it shoots into a toddler. Borf plans to use his invention to take over Earth, and only Ace and Kimmy stand in his way. However, Ace gets shot by the ray, temporarily turning him into a dorky preteen (voiced by writer/animator Will Finn), and Kimberly is captured. Dexter must then track down Borf, rescue Kimmy, and put a stop to Borf’s maniacal plan. Why he is only made a preteen and not an infant like everyone else shot with the Infanto Ray is never addressed or explained. 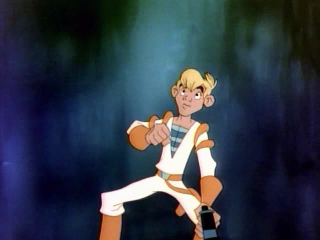 The hero, with a very different personality from Dirk of Dragon’s Lair. Despite being incredibly smug and full of himself, he actually is quite competent as a hero (and with a laser pistol); when he’s in his adult form, that is. Unfortunately, you spend a good percentage of the game playing as his incredibly annoying teenage form, but at least it makes the parts where you do get to play as Adult Ace and feel like a total badass action hero even more satisfying, especially since you get a break from young Dexter’s Jerry Lewis-esque voice. 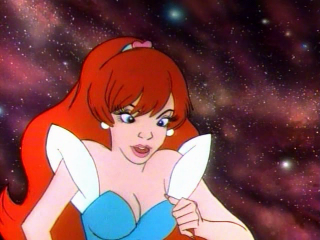 Dexter’s love interest and sidekick. She doesn’t seem to see much in him, refusing to call him by his nickname and always countering his romantic advances. While more interesting in concept than Daphne, she unfortunately spends most of the game kidnapped and annoyingly begging Dexter to rescue her. It isn’t until after you do so late in the game that she even begins to get slightly interesting through her bantering with Ace, before getting kidnapped yet again. 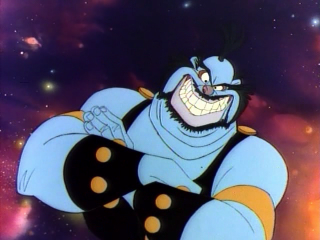 The villain who wishes to conquer Earth with the Infanto Ray. He has a somewhat cool design, but you don’t see much of him outside of him taunting you whenever you lose a life, which gets annoying very quickly. He also doesn’t have much of a personality beyond being maniacally evil. The final confrontation between him and Ace at the end of the game is both extremely difficult and incredibly satisfying if you finally win. While the gameplay is almost exactly the same as Dragon’s Lair, there are a few twists. First of all, there are three difficulty options available to the player. “Cadet” is basically easy mode, skipping over much of the game. “Captain” is a bit longer and more involved. Finally, “Ace” gives you the full experience. It’s an interesting idea, and for an arcade goer with limited quarters, it allows novices a better chance to see the ending (provided they can complete the viciously difficult final scenes), but on modern versions that allow you free continues, it really doesn’t matter much. The alternate paths through levels add replay value that is usually absent in FMV games.

A much more interesting feature is the alternate routes through levels. In almost every scene, there is a point where the player can choose to “energize” by pressing the fire button. This causes Ace to temporarily turn back to his adult self and take a different path through the level that is usually longer and more difficult. This is completely optional, except in the final scene, where you are given a few chances to energize, and if you ignore all of them, you will get killed. This feature is quite beneficial because it gives the game some replay value, unlike the release version of Dragon’s Lair, which required you to play every scene, most of them twice, until you knew the game front to back. This ability to branch the story (albeit very slightly in this case) is one feature that more FMV games should’ve adopted and ran with. One of the biggest problems with most FMV games is the complete lack of meaningful player choice in how the story proceeds, an issue that has crippled the genre since its inception. The appeal of FMV games is to feel like you’re the main character in a movie deciding how the story progresses; something that, ironically, is almost nonexistent in most of these games, which helps Space Ace stand out from the pack. The final battle against Borf is one of the most intense challenges in all of FMV gaming.

The game structure is also set up a little differently. While there was a pseudo-random nature to the order in which Dragon’s Lair played its scenes, Space Ace is completely linear, each scene playing in a specific order. Dragon’s Lair also had many shorter, bite-sized scenes, while Space Ace has about a dozen longer scenes. This makes Space Ace much harder, as you are stuck repeating a given scene until you either get it right, or run out of lives, and perhaps quarters. Dragon’s Lair, when you died, would usually allow you to try a different scene, and although you eventually had to beat all of them, the more free-form approach made it a lot harder to get truly stuck. Space Ace is also even more fast-paced than Dragon’s Lair, especially in the final battle with Borf, where memorization is practically required to even have a chance.

Unfortunately, the game suffers from some severe issues. As mentioned, the difficulty has skyrocketed even when compared to Dragon’s Lair. At least in the original arcade release, a lot more moves require explicit timing. Even if you make the correct move, if you do it too early, you will still perish. On top of that, moves sometimes come so fast and furious that it is practically impossible to get anywhere without some level of memorization, or even making the correct move before it’s obvious what you are supposed to do.

The only thing that somewhat attempts to balance things out is the fact that the game is much more generous with hints on what to do, with almost every move either providing flashing hotspots (which did appear occasionally in Dragon’s Lair, but much more often here), or being able to be deduced through quick observation. However, once you reach the penultimate level, the game goes into overdrive, with sequences moving at a blistering pace that requires almost superhuman reflexes. Thankfully, the simplification of move timing in home versions makes the game much more bearable, greatly improving the player experience.

There are mirror versions of scenes as well. They are used slightly better than in Dragon’s Lair, but not by much. Instead of requiring you to play both versions, Space Ace starts with you playing one version, with a chance of the mirror version randomly popping in. This would be cool, if the game were less frustrating, and if the feature wasn’t terribly implemented. Instead of a scene being randomly chosen as normal or mirrored, either in full or in part, the game usually just plays a large portion of the level one way, then the same scene flipped, basically doubling the length of each stage. The only solace is that when you switch versions, it generally acts as a checkpoint for when you die. Get used to Borf’s taunts, because you’ll be seeing them a lot.

There is a lot more dialogue throughout the game, and this isn’t for the better. The characters usually have nothing interesting to say, and mostly repeat the same shtick throughout the game, with Teenage Ace being whiny and annoying, Adult Ace being cocky and arrogant, Kimmy complaining and warding off Adult Ace’s flirting, and Borf constantly gloating every time you die. It gets old very fast and the problem is made worse by having to repeat a scene when you die, causing you to hear the same inane dialogue every time.

The game also feels like it’s rushing the experience. There is so much happening so fast that we never really get a handle on the bizarre universe the game takes place in, and while there are a lot of strange and crazy moments and ideas to be (briefly) seen, it never quite forms a cohesive whole like in Dragon’s Lair, where everything felt grounded in the idea of a wizard’s mysterious castle. In Space Ace, things just sort of happen without rhyme or reason, leaving gamers confused and bewildered. It is never explained why Ace has an evil clone, or why everything and everyone on the space station is out to kill him. It often feels like the designers had cool ideas but didn’t know how to fit them into the story’s structure or pacing.

Space Ace, while a strong follow-up and still enjoyable in its own right, doesn’t quite reach the heights of Dragon’s Lair, and in the end, feels a bit rushed. It definitely suffers from a slight sophomoric slump, and while it was successful enough to begin work on Dragon’s Lair II, the first FMV game fad was quickly growing stale. Players quickly began to see the flaws with the format, and the market quickly disappeared. Work on DL2 was shelved, and future projects in the same vein, like Sea Beast, were canceled outright. Rick Dyer went solo and continued on with an attempt to create a Laserdisc home system, called Halcyon, but the project never made it to store shelves, with the intended flagship game, Thayer’s Quest, only receiving a limited release in arcades and eventually being ported to home computers and early CD-based consoles like the CD-I and 3DO. It wasn’t until the early 1990s that the FMV game, now partnered with the burgeoning CD-ROM market, would rear its head again. Space Ace did receive some disk-based ports to home computers like the Commodore Amiga, Atari ST, Apple IIgs and IBM PC. Like the disk ports of Dragon’s Lair, these don’t use footage directly from the laserdisc game but instead keeps the static backgrounds and then draws the characters as sprites. It looks fantastic in motion, and quite clean despite the low resolution, but the controls are even finickier, and thus it becomes even more difficult than before. Not everything could be squeezed in the initial release, so a second version, titled Space Ace II: Borf’s Revenge, includes some new scenes as well as some of the old areas that couldn’t originally fit in.