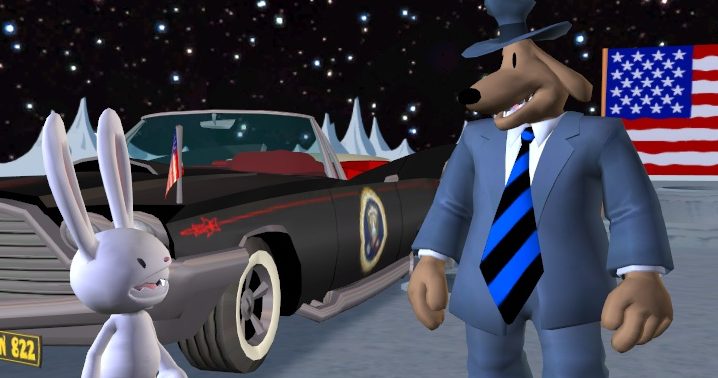 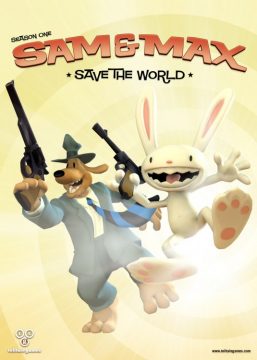 The cancellation of Sam & Max: Freelance Police was seen as a tremendous blow to the adventure gaming market, which by 2004 was subsisting almost solely on indie games and low budget European-developed titles. However in 2005, Dan Connors, Kevin Bruner and Troy Molander founded Telltale Games, with the eventual intention of creating new adventure games. Eventually, an opportunity arose – the rights to Sam & Max had reverted back to Steve Purcell, so Telltale purchased the rights for themselves and began to develop a new series starring the duo. However, since they were still a small company and adventure games were risky business, they decided to adopt an episodic model – each month, a small portion of the game would become available to download, with the full game spread over the course of six months. All six episodes would form what would eventually become known as Season One: Sam and Max Save the World. 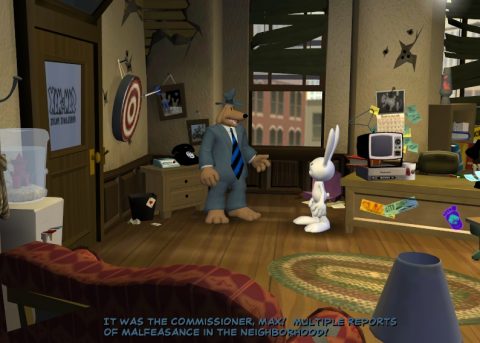 Like the concept for the cancelled Freelance Police game, Season One features six distinct, largely standalone stories, held together loosely by the recurring threat of hypnosis. As such, there’s not much plot development, at least until the end when the big baddie is revealed. You could probably get away with playing them in any order (except the final episode), because outside of a few small elements, there’s not much that carries over from episode to episode. 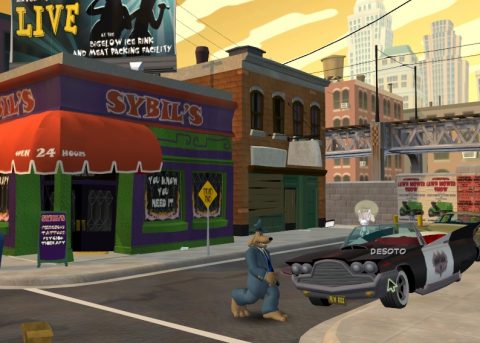 In order to develop each episode in a timely manner, the Telltale games reuse many assets, with each mission starting at Sam & Max’s headquarters, branching out into their neighborhood, and then reaching out further to a unique location. In addition to their office, there are two stores to visit on their block. One is Bosco’s Inconvenience Store, which had previously made an appearance in Hit the Road, although you couldn’t actually see the interior or talk to the proprietor. You can walk inside this time and gaze on the horror of disgusting hot dogs and artificial cheese. Bosco is now a pretty major character, an affable but paranoid wacko who develops increasingly complicated security schemes and changes his persona from episode to episode – while he’s “normal” in the first episode, he tries to be British in the second episode (complete with monocle), French in the third, and so forth. His disguises are flimsy and his fake accents are ridiculously bad, much to Sam and Max’s amusement. Despite his insanity, he’s also a talented inventor, and will nearly always have some kind of device that’s vital to progression, even though it’s usually some hastily MacGuyvered piece of crap sold at an exorbitant price. 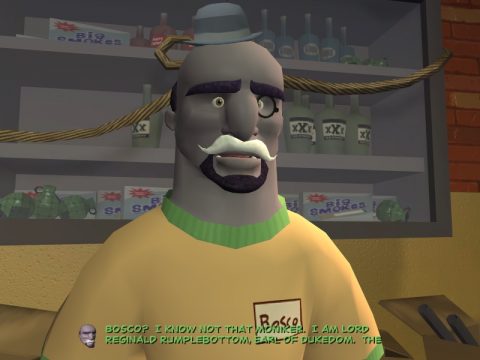 On the other side of the road is Sybil, a young woman who constantly reinvents her store every episode. She starts off as a psychiatrist, and then eventually moves into professional witnessing (which is as odd as it sounds) and product beta testing. Like Bosco, her Career of the Week will always prove to be in some way relevant to the case at hand 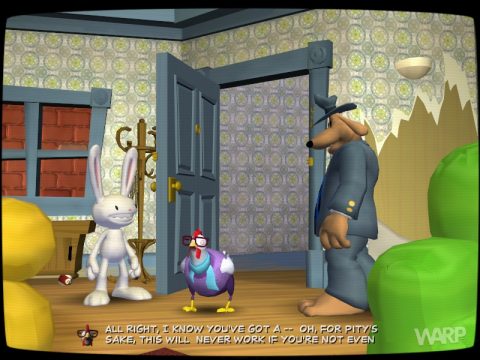 The first episode, Culture Shock, acts as an introduction to the reborn series, to acclimate both old fans and newcomers to Sam & Max’s neighborhood. The area has come under assault by The Soda Poppers, a group of former child stars who have become low quality vandals, spray painting the neighborhood with the visage of Brady Culture, an afro-wearing guru who promotes Eye-Bo, a unique type of ocular exercise. Sam and Max quickly realize that the diminutive duo is being hypnotized, although they themselves are invulnerable – Sam is protected by his hat, and Max’s obtuse biology simply renders it ineffective. After figuring out a method to break the subject free of their hypnotism – smashing them on the head seems to work – they track down Brady and confront him. 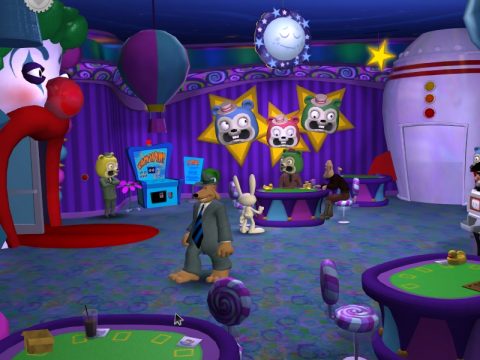 The second episode, Situation: Comedy, involves an Oprah-esque talk show host named Myra who has, literally, held her audience (and her viewers) captive via hypnosis. In order to break onto the set, Sam and Max need to star in a series of other unrelated TV shows in order to prove their credentials. The two get a starring role in Midtown Cowboys, a thoroughly stupid show about two cowboys living in Manhattan who need to hide their cow from their landlord. Also, their landlord is a talking chicken. This episode also introduces the flamboyantly cheerful Hugh Bliss, leader of Prismotology, a religion/cult who follow the colors of the rainbow, as well as Philo Pennyworth, the aforementioned talking chicken who’s actually a trained Shakespearean actor slumming it on network television. 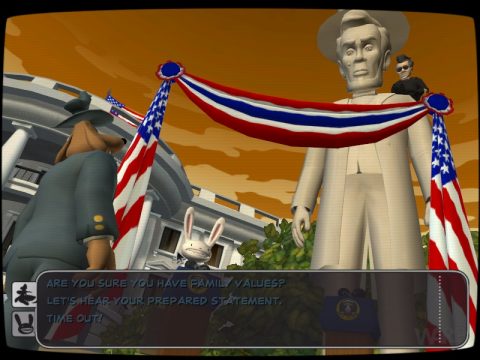 In the third episode, The Mob, The Mole, and the Meatball, Sam and Max follow-up on a lead from the last episode, wherein they learned that Myra’s audience was hypnotized by a stuffed teddy bear on her desk. This bear is traced back to the Toy Mafia, a crime organization which runs an incredibly bright and cheery casino. Here, you get to break the soul of a shady gambler through a series of “Yo Mamma” jokes. The catch is, Sam only knows the beginnings of the insults, while Max only knows the endings, so you need to use both of their skills for full effect. It’s a segment that falls flat, because there’s a sparse amount of responses, making it all too easy.

The fourth episode, Abe Lincoln Must Die!, brings Sam & Max to the White House, to investigate a series of bizarre laws passed by the President of the United States, including one that requires group hugging at all sporting events. With a bit of effort, they learn that the Commander-in-Chief is, quite literally, a puppet. In an emergency election, the statue of Abraham Lincoln from the Lincoln Memorial leaves his chair and begins to start campaigning, but he too appears to be in cahoots with the hypnotizing scheme. To combat this menace, Max runs for president himself, and must ruin Lincoln’s speeches so he gives upsetting answers to various national issues. Once Max gets elected, the evil Lincoln goes crazy and starts rampaging through the streets. Not only that, but North and South (and the newly formed West) Dakota have declared war on each other over the possession of Mt. Rushmore, making Max’s opening days quite troublesome. 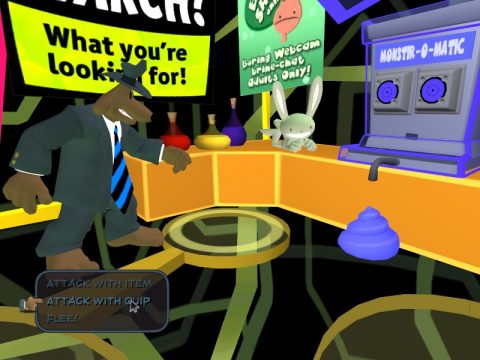 Sam and Max take on the Internet in the fifth episode, Reality 2.0, where the denizens of the planet have been enslaved by a new virtual reality simulator, which creates a parallel version of the neighborhood in cyberspace. Here we meet the “Computer Obsolescence Prevention Society”, otherwise known as the COPS. This group includes Bluster Blaster, an ‘80s arcade machine who speaks entirely in angry exclamations and was inspired by the game Sinistar; Bob Bell, an automated telephone answering system who sounds suspiciously like Mr. Moviefone; Curt, an old Osbourne-1 who speaks with a voice synthesis unit and has a fondness of overtly technical terminology; and Chippy, a Pong machine who can only speak in bleeps or bloops. Together, they control various aspects of Reality 2.0, and can be messed with to hack the parameters of Sam and Max’s avatars. This episode features tons of geek humor, as you need to gather coins Super Mario Bros.-style to buy stuff from Bosco, who has gotten hooked on RPGs and dubbed himself a half-elf. You also get roped into a few turn-based RPG battles (including one against a slime, a nod to Dragon Quest) and find a save point that looks suspiciously like the floating multi-sided ball things from Castlevania: Symphony of the Night. In the final segment, Sam and Max find themselves inside a text adventure (although navigation is determined by picking selections from a menu) as virtual reality crumbles around them, which is written in the typically deadpan Infocom style. 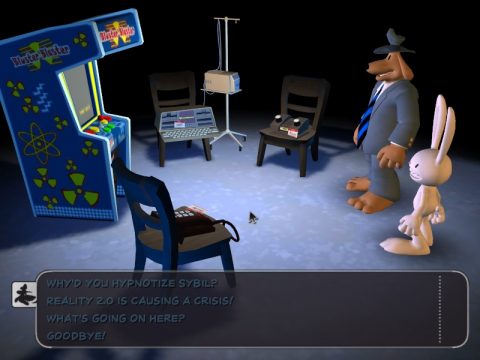 The final chapter, Bright Side of the Moon, finds all the plot threads loosely coming together, as Sam and Max travel to the moon, where the big bad has set up his fortress. Here you’ll find several old characters, all of whom have also fled into outer space to find fulfillment. Here, Max’s vices will be separated from his person, and take on troublesome physical forms. This leaves the real Max as a listless shadow of his former self, so Sam needs to reassemble all of the parts of his buddy before the final showdown. 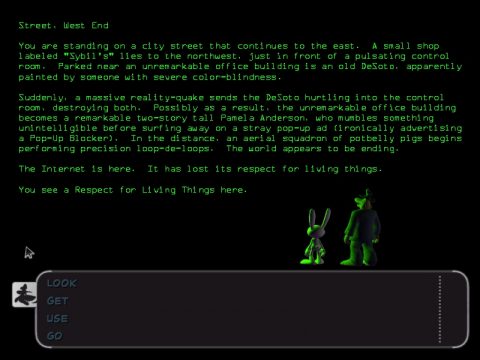 Beyond the episodic nature of the series, numerous aspects are significantly different from its LucasArts incarnation. The interface uses a single-icon cursor for all actions, although there are tons of hotspots to interact with and comment on, so at least it doesn’t feel as barren as most modern adventure games. The dialogue system is more direct, with the exact lines of dialogue to choose. Max isn’t used for puzzles any more, and in fact, usually just gets in the way, causing Sam to knock him into the sky and land harmlessly seconds later. In a few instances, he can also join in conversations with unique dialogue options. There are also a few arcade-style driving sequences, although they’re mostly used for simple puzzles, and are quite easy. 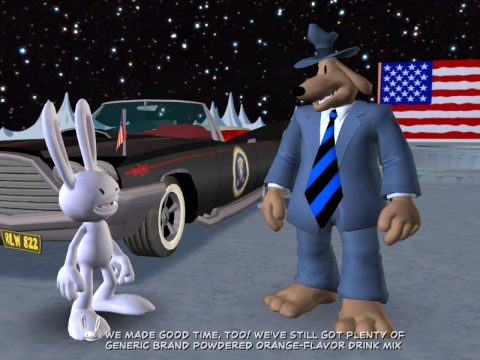 Perhaps the biggest change is the emphasis on story, dialogue and characterization. In Hit the Road, outside of Sam and Max, none of the secondary characters played any real role beyond acting as signposts. While the dialogue there was quick and snappy, it’s much more drawn out in the Telltale games. It offers substantially more characterization and storytelling, but the writing is often inconsistent, resulting in lots of blathering or jokes that just plain aren’t funny. In generally, the dialogue just isn’t as dry nor as witty as Hit the Road. There tends to be too much reliance on things that are conceptually amusing, like the Soda Poppers (washed up ex-child stars, isn’t that just crazy?!?), and they end up totally beating the joke into the ground with little payoff. This is because there are usually something like half a dozen designers that worked on the season altogether, which accounts for some of the differences. The voice work is generally excellent, although Sam and Max have completely new voice actors (Max’s even changes again after the first episode) and they just aren’t quite as good. Like the cartoon series, Sam’s actor can’t quite pull off the more sarcastic lines, and Max is missing his vaguely Brooklyn-ish accent. 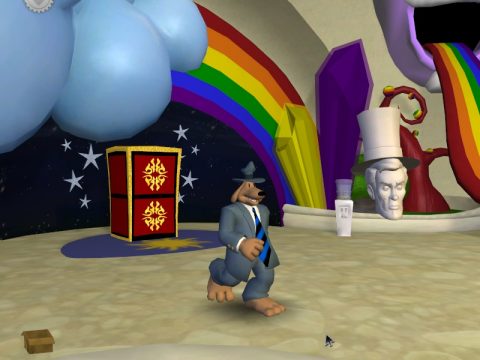 While it takes a few episodes for Season One to find its footing – it’s not until Abe Lincoln Must Die! that Telltale really finds their voice and does something really worthy of the characters – but it’s still a great start. However, the later seasons are substantially improved, making this one seem weaker in comparison. In addition to the PC release, Season One was published on the Xbox Live Arcade and as a physical release on the Wii. Neither are worthwhile – it’s tough to control the Xbox version, and the Wii version is quite glitchy, with a choppy framerate and dialogue that gets clipped off at the end of lines. 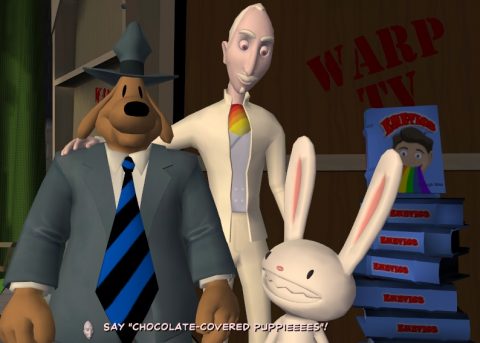