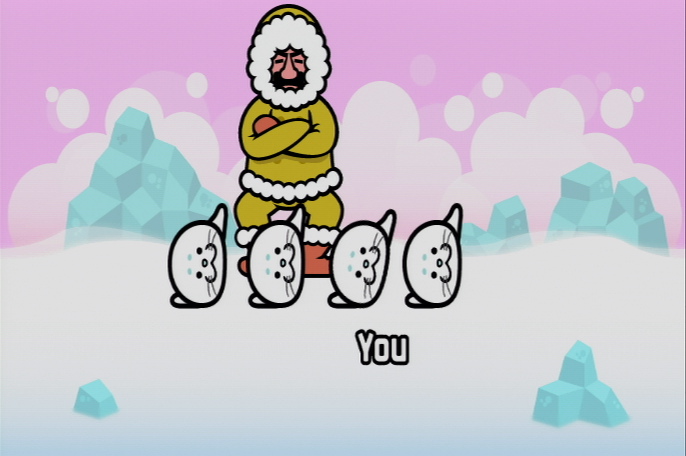 Rhythm Heaven heads to the Wii with the third installment, and it’s nice to have it on a big screen, especially since the arcade game never saw release outside of Japan. The series has never had a problem artistically, but now the graphics are much sharper, and the sound quality much clearer. And thankfully, having learned its lessons from the shiftiness of the stylus controls in the DS game, there are absolutely no motion controls at all. It works much like the GBA game, where you tape the A button to most beats, except occasionally you’ll also have to press both A and B at the same time. Many games also have a “goal”, by hitting certain segments of the song, which will grant you an extra congratulations on the ranking screen.

The setup is identical to the previous games. There’s also an option for a demo so you can hear how the beats are supposed to sound, which is vital to at least one of the games. There’s also a multiplayer mode similar to the arcade game, where you match your rhythm with a friend on two-player variations of certain games. In addition to the usual assortment of Endless games, there are also a few songs to unlock from the older versions.

These weird looking dudes are see-saw testers, which has to be just an amazing job. The rocking track is pretty decent too.

Oh no! Your date is going to be ruined by the local sports teams! Protect your sweetie (and the weasels nearby) by kicking the errant balls away from you both.

The first really hard game, here it portrays a watch filled with tiny monkeys, whose hands you need to slap every second. It’s tough because the button presses are on off-beats to the song, which gets worse with the purple monkeys, which are off-off beats. The Remix version is brutal.

Mid-air badminton matches? Sounds fun. Here your opponents sings various phrases to indicate higher hits, and flies back and forth in the background. The scrolling clouds and terrain seems like a modern rendition of something like After Burner.

Probably the most famous game in Rhythm Heaven Fever, having obtained meme status before being released in North America. The reporter asks a question (“Wubadubaduba is that true?”) then you, as the wrestler, responds. You also flex your muscles and pose for the photographs.

So, there’s this octopus giving commands to a squadron of…things?…who knock themselves to power their blimp. The best kind of pure Rhythm Heaven insanity, right down to the psychadelic clouds. The credits can’t even decide what they are – they just refer to them as “Uh…these guys?”

One of the most annoying games. Here, you need to mimic what the girl in the middle is saying, with the timing dependent on a handful of phrases. Getting the rhythm down is difficult due to the hip-hop nature of the song, which doesn’t have much in the way of discernable beats.

It’s an executive board meeting of pigs, where you need to impress your clients with your chair spinning abilities. 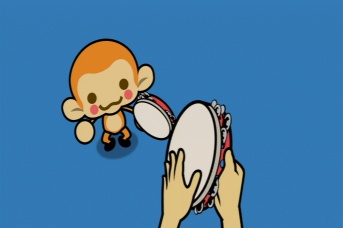 This game also seems significantly harder than the original. Maybe it’s just the touch screen mechanics or maybe the grading has just gotten harsher, but some of them get pretty brutal. Thankfully, the “coffee” option is still there if you need to skip a game just to get on to the next one. The music itself is outstanding, although honestly, the characters, songs, and levels in the first game are a bit better. This one feels like it relies a bit too much on Space Channel 5-style “Simon Says” type games, whereas the original had a better mix.

Graphically, it’s about on par with the DS game but at a higher resolution, although a scant few games use 3D visuals, and some of the remixes show off more varied graphics. The sound quality is definitely a step up, but Rhythm Tengoku was pretty damn good for a GBA game, so it’s not vastly improved. There are still a number of bonus Endless Games and toys to play with, and they’re a bit more fleshed out than they were in the original. The drum lessons are gone, replaced with guitar lessons, which aren’t nearly as complicated, and thus not quite as fun. You’re just given a handful of songs from the game, and need to repeat the riffs.

This is probably the best of the original trilogy, though it’s outdone by the ultimate game in the series, Rhythm Heaven Megamix for the 3DS.

In the American release, the endless game “Manzai” is replaced with “Mr. Upbeat”, probably due to the difficulty in translating the puns into English. 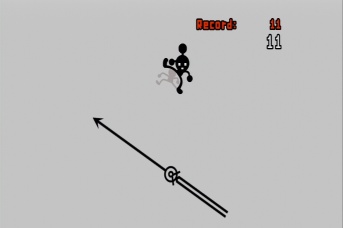 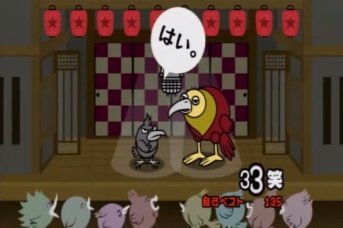