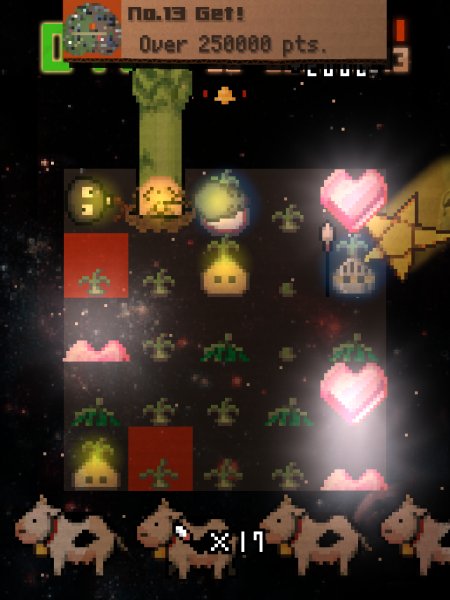 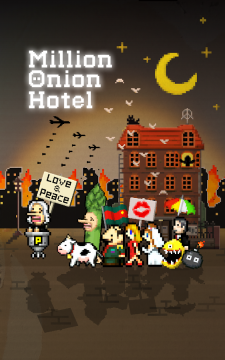 Yoshiro Kimura is a Japanese game designer who became known even in the West for his games full of interesting and unusual mechanics, nonsensical plots and childish presentation that hide more serious themes and, most of all, a bizarre sense of humor. All of these things can be found in Million Onion Hotel too: this is the first game he made for portable devices, under his company Onion Games.

The titular hotel is situated in the middle of an island, right on the border between two warring nations (whose flags look suspiciously like the ones of USA and North Korea – the game was originally made in 2014, in any case). Its owner, wacky mad scientist Dr. Peace, is trying to bring, well, peace between these states by means of his weird inventions and the soup made from said onions, a delicacy with apparent magic properties. 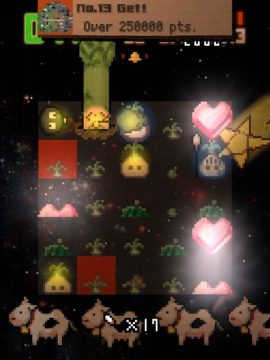 About the gameplay: it’s basically a variant of whack-a-mole. A 5×5 grid of squares represents the hotel, and in the beginning we only have 30 seconds to tap on the onions that briefly pop up from the ground, in order to turn the squares red. The goal is to complete a 5-square line (horizontal, vertical or diagonal) and thus make an onion clock appear, that if tapped adds more seconds to our timer. Tapping on onions also increases the score, and scoring points advances the level. Every few levels new stuff pops up along with the onions, starting with jugs that need two taps to be removed from the board, brooms that sweep the red squares near them, bombs that remove all the red squares around them after exploding, and so on.

To add to the old school 8-bit game veneer, starting from level 10 and every 20 levels an intermission scene (“Onion Time”) appears, to help make sense of the game’s story… well, as much sense as a game by Kimura can make, anyway. Despite the apparently cute graphics, they feature several pixel people having sex and killing each other… it’s still a game about a war, after all.

Everything seems very simple and just a time-waster with a retro coat of paint, but this is only the surface. The very brief tutorial suggests to make intersecting lines instead of just simple lines. Completing these crossing lines not only makes two clocks appear, but also a bell: this new item, when tapped, will temporarily bring the board to sub-levels in outer space, complete with flashing colors, a wacky song, space cows (?) and the opportunity to significantly raise the score and obtain new items. 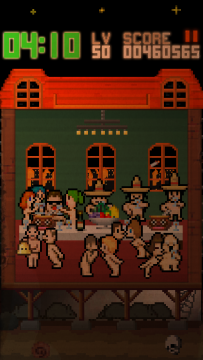 Making lines in space will make the usual clocks appear, but with them also Pacman-esque fruits and onions in a helm and spear. Fruits come in tiers (each one after completing a line) and add lots of points during the tally at the end of a playthrough, but aren’t your primary concern: the knight onions are much more important. They don’t appear during normal gameplay, but are fundamental during the boss battles…

Yes, there are boss battles, and they are tough. Starting from level 20 and every subsequent 20 levels, the grid will be sucked into an ominous black hole, and then we will have to face one of Dr. Peace’s bizarre inventions gone haywire. The gameplay is similar to the usual levels (without the space sub-sections), only tapping the onions will damage the boss… however, each onion only removes a small bit of these monstrosities’ life bar, and that’s where the knight onions come into play. Tapping on them (they are stored below the grid, that is, under the hotel) will hurl them against the boss, which will be hurt a lot more. So, the strategy at this point seems clear: make lots of single lines in the early levels to rack up lots of seconds on the timer, then take our time to make crossing lines, go to space and pile up many knight onions… Easy, right? Wrong!

For starters, bosses can turn temporarily invincible by summoning a barrier, so it’s necessary to pay attention to the audio and visual cues, to avoid wasting all our precious knights. Bosses also have unavoidable attacks that shave off lots of seconds from the timer, so if one does take a long time to collect knights but defeats the boss when the clock nears 00:00, the game is over since the timer doesn’t regenerate after the boss’ destruction. Bosses lose after a while if you don’t damage them (check out their battery indicator!), but this option, other than giving no bonus points, leaves us open to several attacks. Thus, one could have their timer reduced to almost nothing, and since the gameplay slowly but surely becomes more and more frantic, it becomes harder to focus on the lines instead of just randomly tapping all the stuff that pops up. 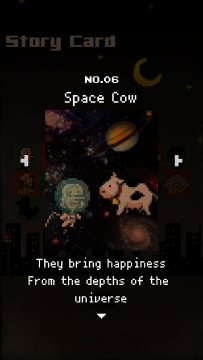 But that’s not even all: there are also the cards, the game’s equivalent of achievements. Some of them are obtained in a very straightforward way, by completing tasks like beating bosses, tapping on 2000 onions, collecting 500 bananas and so on. Others are unlocked only by progressing through the story, which shows the war between the two nations escalating to the point that the hotel gets bombed… but all of its colorful guests get somehow transported into space. So, when the card page in the main menu gets updated after reaching certain levels, there’s something new to do: go again to space in the next playthroughs in order to rescue the hotel’s guests that are stranded there, still by making lines!

At this point the game has become a full-fledged puzzle and it is pretty much mandatory to learn all the intricacies of the gameplay (for example, some enemies need to not be tapped, others move in a spiral toward the grid’s center) and also remember that double (or even triple) lines can and should be made in space, or your time and knights will never be enough to progress.

Easier said than done: if there’s a problem with Million Onion Hotel, it’s that it becomes almost  overwhelming after a while. Later levels throw so much stuff at the player (including time-removing attacks that hit specific squares that you must protect with an umbrella, by keeping the finger pressed on that square) that it is almost impossible to concentrate, and one is reduced to tap madly on their tablet or smartphone’s screen. And the reddish hue of the graphics sometimes doesn’t help matters. After all, the game’s official site says it best: “Even you don’t know (sic) what’s going on, don’t care about it, tap very much like crazy anyway.”

In any case, Million Onion Hotel is a great game for whoever likes retro-inspired games fused with more modern sensibility (and, of course, extreme wackiness): it is simple to play, difficult to master, but is very rarely unfair since everything that comes up is done in a way that what needs to be done  becomes immediately clear. It might not be too long, but then again the quest for the best score (again, like old-school games) among players from around the world is always a good incentive. An interesting little title that puts itself above most self-described “retro” smartphone games.