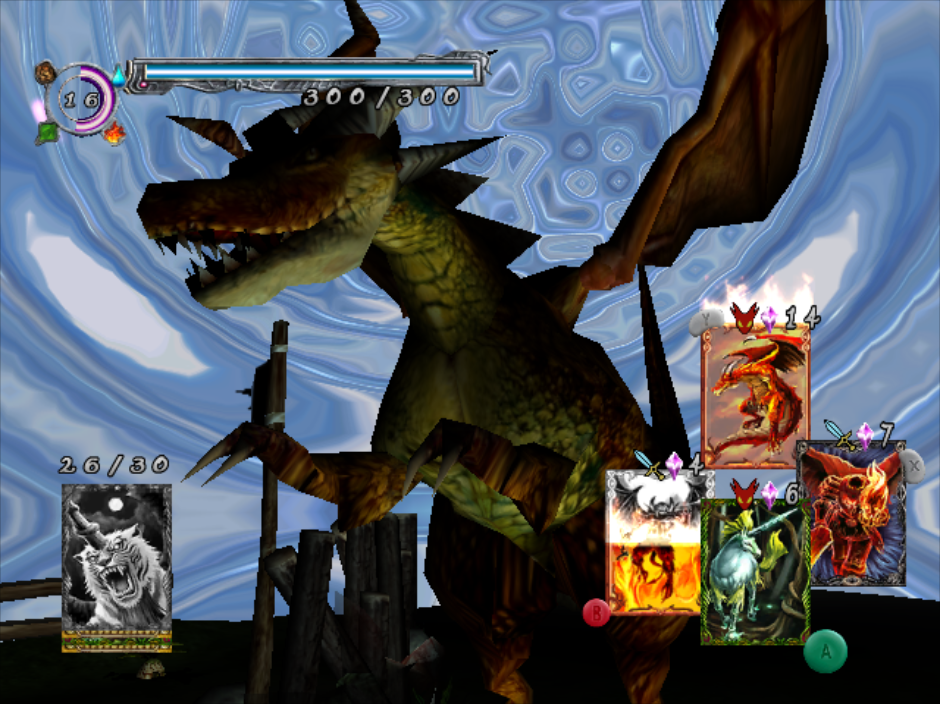 From Software’s catalogue can be divided into two distinct eras: the pre-Demon’s Souls era and the post-Demon’s Soulsera. From, the modest Japanese developer known for its niche, plodding King’s Field games, gained international acclaim from both fans and critics for Demon’s Souls in 2009, effectively putting them on the AAA map. Hidetaka Miyazaki, who had worked on a few of From’s Armored Core titles, was placed in the director’s chair for Demon’s Soulsand really whipped the developer into shape. Dark Souls, its successor, made an even larger splash in 2011 with tight game design, competitive online multiplayer, and esoteric myths for fans to discuss. The From seal of quality was solidified, and it was no surprise that 2015’s polished Bloodborne had high sales worldwide.

Lost Kingdoms (“Rune” in Japan) is an average action RPG that falls firmly in the middle of the pre-Demon’s Souls era, in 2002, somewhere after the last King’s Field game and before Metal Wolf Chaos and Enchanted Arms. It’s one of the handful of GameCube RPGs that left Japan and, like its peer, Monolith Soft’s Baten Kaitos, is all about card collecting and battling. 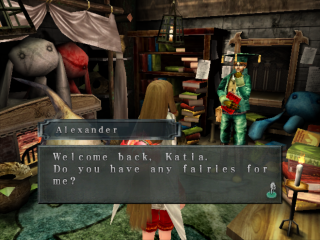 Fromsoftware’s fantasy RPGs often take place in dreary, isolated pseudo-medieval worlds. Lost Kingdoms is no exception. A black fog hangs over the kingdom of Argwyll, consuming people and villages, birthing demons, and generally ruining everyone’s day. This plot may sound familiar to fans of Demon’s Souls, albeit with far less detail or character.

King Feobane, like any good RPG king, takes off into the countryside to solve the mystery of the fog and hopefully heal his kingdom. Lost Kingdoms begins with Feobane having been missing for some time. Protagonist Princess Katia, Feobane’s daughter and runestone card-battler badass, takes the powerful runestone from her father’s castle and goes off into the fog after him.

The plot is light, and the character development is essentially nonexistent. There are a handful of NPCs to liven the world, though:

A nondescript king that shakily holds the plot together. In most missions, players are looking to meet up with the King, only to find out he already passed through the area. When Katia finally catches up to her father, the climax of the plot, nothing really happens or changes. 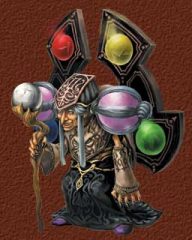 Katia’s guide and the owner of the card shop. Players can visit her between missions and can buy cards, sell cards, upgrade cards, or duplicate cards by spending experience points. Her reasons for helping Katia are shrouded in mystery, and she has some pretty funny dialogue. Talking to her sometimes unlocks one of the game’s short sidequest areas.

The other functional NPC players can visit from the world map. This guy is completely obsessed with Red Fairies, and rewards players with rare cards for collecting them in dungeons. Not much else to say, though he has a spiritual double in Lost Kingdoms IIwho is equally as goofy.

Helena is in many ways the opposite of Katia and that’s about the extent of her character. She’s dark and mysterious, uses cards, and summons demons for Katia to fight. She’s a red herring villain and probably isn’t as sinister as she first seems. 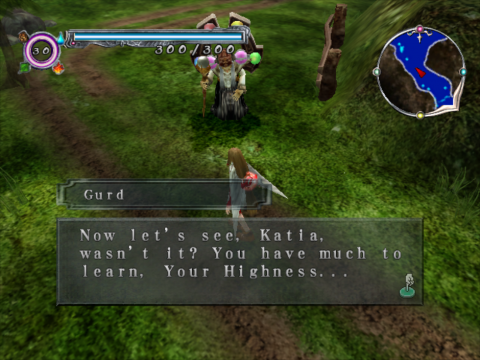 Lost Kingdoms is an adventure that experienced players could easily complete in less than five hours. The difficulty is low overall, with a huge and unfair spike during the final encounter. Each stage is entered by selecting it on the world map, which gives the game a disjointed, mission rhythm rather than feeling like a long journey. There are only a handful of areas in the game, and they cannot be returned to until after the final boss is defeated. This limits the time a player can spend with the game, though there isn’t much exploration to be done anyway. Players can grind for experience by repeatedly abandoning missions halfway through.

Every dungeon is extremely linear and features a simple puzzle to get to a boss. Occasionally, a stray NPC, usually dying on the ground, gives Katia some advice or ominous flavor dialogue. None of the levels are long enough to be taxing on the player’s resources and can be summed up nicely in one word. There’s a desert area, a bridge, a cave, a graveyard, the lava level, etc. Lost Kingdoms‘ levels are either dreary or forgettable, but the overcast, neutralized grays and browns that make up the majority of the game offer a consistent and striking atmosphere. 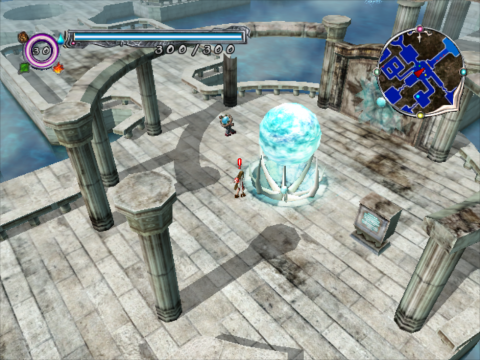 Battles are semi-random, activated when Katia moves over certain spots on the map. Once a battle starts, the map dissolves into a closed-off battle arena. Combat is in real-time, which is both exhilarating and sort of annoying. Players must keep Katia moving to avoid enemy attacks, a task made difficult if the terrain is tight or she is backed into a corner (often by her own summons). Katia can also be knocked to the ground by certain attacks, momentarily rendered immobile, giving some battles a slow, awkward pacing.

Katia herself cannot attack directly and instead relies on summoning creatures with her cards to deal damage. Each card use costs Magic Stones, and players earn more stones upon successfully landing attacks. It’s a system that could feel more rewarding with some polish, and is a similar idea to the risk/reward rally counterattacks in Bloodborne. If the player runs out of Magic Stones, the card’s begin depleting Katia’s HP.

Katia holds four cards at a time (assigned to the A, B, X, and Y buttons), and when one is used up, another is drawn from her deck. There are three types of cards Katia can wield and players must know when and where these cards will be useful. 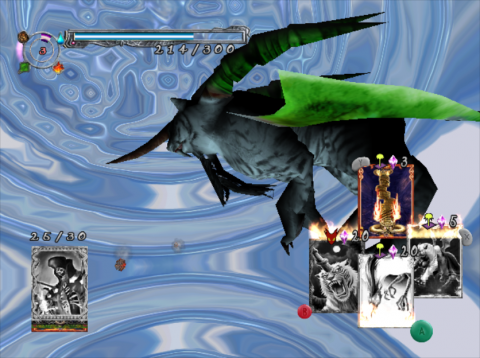 Weapon-type cards are multiple-use attacks that come from Katia, like a sword swing or tornado projectile. Most of these attacks have a low Magic Stone cost and can be used several times in quick succession. The more intricate the attack animation is,the more difficult the card is to time correctly, and new players will often miss against quick or flying foes.

Independent-type cards summon helpful monsters to the field. Katia can summon giant sword-swinging skeletons, plague-spreading rodents, support magic fairies, to name a few. Players can summon up to four monsters at a time, Magic Stones allowing. The best part of these summons is that they not only distract enemies from attacking Katia, but their big, awkward hit-boxes block enemies from getting anywhere near her. These cards are a must for boss battles. They last until they’re defeated. 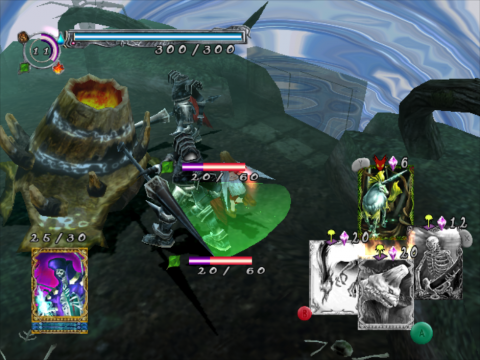 Building Katia’s deck is the meat of the game’s battle system, and mastering deck building is the key to finishing the game. A deck can hold up to 30 cards of any kind, and can only be edited from the world map. Each card has an element associated with it and these are used to exploit enemy weaknesses.

A card can only be used once per mission, and is then discarded. Running out of cards means having to restart the mission, but players keep any items and experience earned. Managing resources is important, or at least it’s supposed to be. Players will quickly learn that running from battles is the best way to get through dungeons painlessly.

Players can flee battles by pushing against the arena edge for a moment, which only sacrifices a single card and always works. Completing battles nets the cards used some experience points, which can be spent to upgrade the card into a better one at Gurd’s shop, or spent to duplicate it. Katia can also capture monsters during battle by whittling down their health and throwing any card at them. If the card depletes their health to zero, the monster is captured. Capturing cards is surprisingly easy. There are also objects on the field that can only be destroyed during battle, allowing Katia to access treasure afterward.

There are a few boss battles where Katia must face another card summoner. These battles are highly satisfying and also the most frustrating part of the game. It is challenging to fight an opponent that can summon more monsters to help it, leveling the playing field a bit. These bosses will spam summon-type cards, canceling Katia’s attacks and granting them annoying invincibility frames. These fights are the few times in the game where it may be necessary to actually alter one’s deck for a new, optimized strategy. 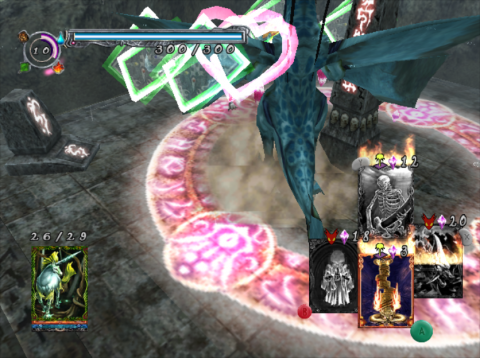 Not through the fault of the camera but due to the nature of the battles, it is difficult to distinguish exactly what is happening during hectic fights. Battles can devolve into a jumble of different colored polygons as up to ten character models are stuck on each other’s hit-boxes, casting spells and spamming attack animations. Summon-type cards that cut away to play a short cutscene only further the disorientation.

What makes Lost Kingdoms great, though, is its simplicity and accessibility. It’s a game with little affectations, and it is too minimal for hand-holding or huge amounts of text to sit through. The dungeon design and plot are uninspired, but the combat and deck building make up for it. Even with its mediocre presentation, Lost Kingdoms exemplifies From’s gift of cutting the fat and leaving players only the joyous essentials. It may not have the bombastic quality of Baten Kaitos, nor the high sheen of Tales of Symphonia, but Lost Kingdoms is nonetheless an interesting footnote for both the GameCube and developer From.

With its dreary fantasy setting and calculated action RPG battle system, Lost Kingdoms was another step closer for FromSoftware toward developing Demon’s Souls, the eventual gold standard of dreary action RPGs. Lost Kingdoms was published in North America and Europe by Activision and earned relatively positive scores from critics in 2002, with a particularly unimpressed review from IGN. User scores are average across the board, and despite its unique battle system and pedigree, has yet to become a cult classic. Still, there was enough Lost Kingdoms love for FromSoftware to release a sequel the next year, with Activision once again bringing it to the rest of the world.