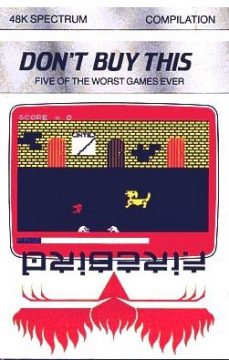 Released in the UK on the 1st of April 1985, costing £2.50 and coming on audio cassette tape, Don’t Buy This is actually a compilation of games – apparently five of the worst ever submitted to the publisher Firebird for consideration. The inlay for the cassette box proudly proclaims: CAUTION: This cassette contains five of the most uninspired games ever to disgrace the 48K Spectrum. This is probably the beginning of the end of games as you have known them. YOU HAVE BEEN WARNED! Firebird even goes as far as disowning all copyright, encouraging people to “copy it at will”, and then asking you to write in and complain, for a chance to win a badge or a sticker. The entire shtick behind this tape is that you’re getting a pile of crap.

It seems wrong to grant a hallowed place in the HG101 Hall of Kusoge Fame to something which intentionally sets out to be rubbish, but the fact remains that over 25 years ago (long before kusoge was common parlance in the west), a company was attempting to capitalize on people’s fascination with trash, making it an important historical footnote. Furthermore and rather ironically, even in the context of bad games for the ZX Spectrum it still fails at being the absolute worst. Uninspired, dull and lazy – perhaps – but not quite defining the barrel’s rather round bottom.

The best is Weasel Willy, which is a bit like Snake, and a great example of why randomisation is bad. Instead of collecting things you avoid randomly placed trees and your tail never disappears; touch the paws left by the rotund weasel, any tree or the outside walls and you die. Progressing to the next level is entirely random (it just suddenly happens for no reason whatsoever). Subsequent levels increase the number of trees and, thanks to their random placement, you can start off in an unwinnable situation. Perhaps it’s attempting to teach kids a valuable life lesson?

Next is Race Ace, which looks vaguely like Namco’s Rally X but plays more like Big Rigs. The controls replicate real driving with specific buttons for turning left and right, but this only makes sense when travelling up the screen. You don’t actually have to win the race either, just get ahead of the pack, whereby the race ends. Fido is a single-screen arcade-style game, where you move left and right and wag your tail to bash moles’ skulls in. When your food meter is low you need to eat from the bowl. It sounds almost OK, as OK as the awful Donkey Kong 3 anyway, but the execution is dire. The dog actually increases in height when sitting down, making him the target of flying birds, so he needs to stand up in order to “duck” and avoid them. For fans of the original there’s also the sequel, Fido 2: Puppy Power. It’s a lot like the first, except the dog can now walk up and down, and shoots lasers out of his face. Fruit Machine is a one-armed bandit simulator and as uninteresting as you’d expect.

There’s a couple of truly atrocious ideas which warrant this as kusoge material, but otherwise it’s not really worth bothering with. Unsurprisingly critics of the day utterly panned it, from Crash through to ZX Computing. The ironic thing about all this though is that it still sold extremely well, according to the Back to the Eighties column in Retro Gamer issue 15. It would seem that five mediocre games costing a mere 50 English pennies each was too good to ignore, despite all protests to the contrary.

Master Chu and the Drunkard Hu