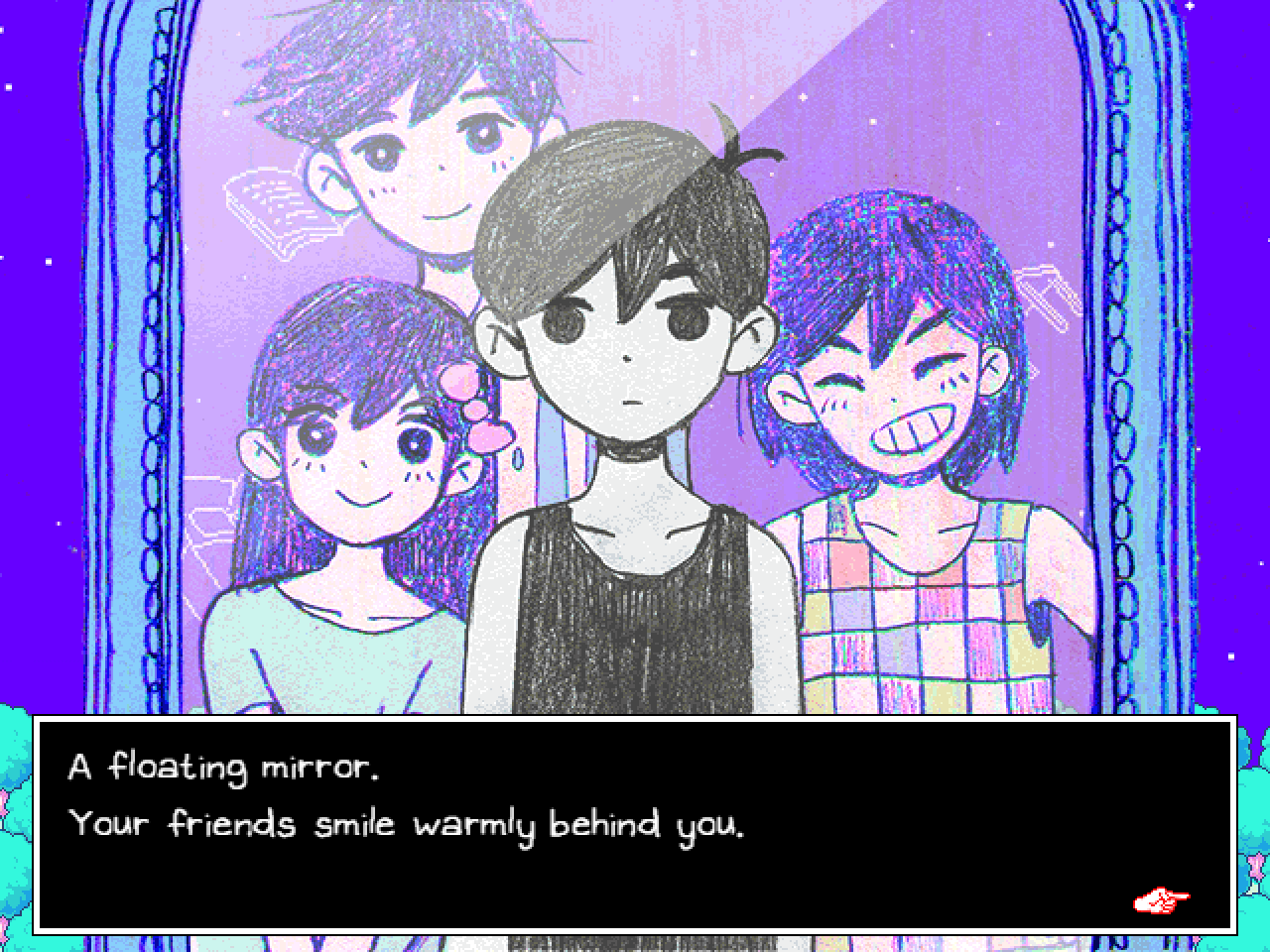 Mental health is not a topic all that common in the gaming industry. Sure, you may see it sprinkled here and there, but it’s not actively picked up for gaming stories. Thanks to the work of indie developers, however, this particular issue has become far more prevalent with games like Yume Nikki, Celeste, Lisa: The Painful and more recently, Omori.

Of course, one can’t talk about Omori without mentioning its difficult development hell. Omocat, the creator, initially kickstarted her project in 2014 with its planned release date being May 2015. She intended it to be a video game version of her drawings and comics of a hikikomori character she named “Omori.” However, May 2015 turned to 2016. Then 2016 to 2017… Eventually, 2019 passed, and the game still hadn’t been launched. Then finally, on December 25th, 2020, Omocat released the game as her Christmas gift to all her Kickstarter backers. Now was this wait worth it?

Without going into too much depth, yes, it was.

A silent protagonist that has lived in a place called White Space for as long as he can remember. He’s an all-around character, dealing great damage while still moving fast. His weapon of choice is a knife.

The cheerful and hard-hitting girl of the group that deals massive damage, but ends up being a little slow. She and Kel fight a lot. Her weapon of choice is a plush toy.

The talkative and loud boy who plays like a thief, with the highest speed stat of the party. His weapon of choice is a rubber ball.

Kel’s older brother, though he acts like the older sibling of the entire group. He is most like a healer, but can hold his own in a fight. His weapon of choice is a spatula.

A shy and calm boy most noted for his flower crown. Despite not being a playable character, he and Mari are central to the story.

Omori’s older sister. Everyone describes her as a perfectionist, and she is loving and kind to everyone in the group. She is often found at picnic baskets, which serve as save points and healing throughout the game.

A boy who dreams up the dream world. 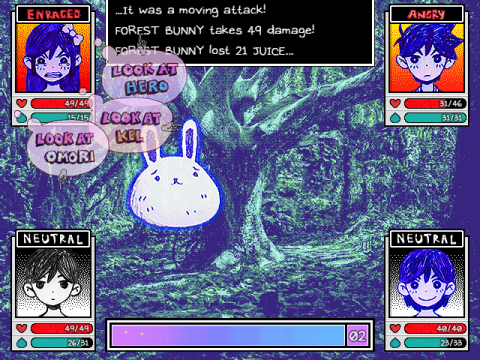 The problem of the story begins when Basil disappears from the dream world after the six friends had a picnic together. The five friends then travel the world, looking for any sign of Basil. From here, the plot focuses on the small story arcs you face as you go through each part of the world, which makes apparent the influence Earthbound has had on this game. In one part, Omori and his crew help a space pirate captain who had his heart broken by his ex-girlfriend, and in another they have to escape from a casino after being contractually obligated to work without pay.

With that Earthbound inspiration also comes its humor, as well. For example, in one dungeon you can’t skip to the end because a truck is in your way. Once you finish it all and get behind the truck, however, it turns out that the truck was nothing more than a large cardboard cut-out! Another character who is particularly hilarious is Pluto, a former planet who escaped his old life in order to build his very own transportation company. In Space Boyfriend’s own words, “perhaps Pluto was not destined to be a planet…”

Despite all of that, though, this game is definitely a part of the psychological horror genre. While on the outset this game is cute and colorful, there are always quick, small instances where the terror will rear its ugly head. The horror will slowly reveal itself, making you wonder when the next moment will strike in between all of this humor. And all of it originates from Something… a being always watching you. You may only catch glimpses of it, but it is always there, watching at a distance. 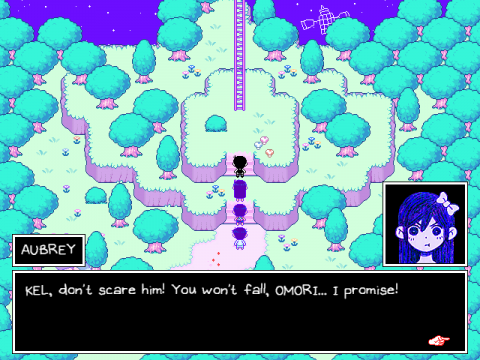 And interestingly enough, the real world is where things get even more terrifying. This is the second part of the game, alongside the dream segments. Four years have passed since a life-changing event happened, and as such, the characters are older than they are in the dream world and have changed dramatically from their dream world counterparts. Aubrey is no longer cheerful, Basil is always anxious, and to top it all off, Something is still here…

To top it is, there is a secondary Follow-Up system, where the characters can follow up their attacks with combos alongside their friends. Kel can throw his ball at Aubrey, who will hit it at an enemy. Hero can cheer up Omori, which will heal him and let him attack once more. And if you hold on long enough, you can do a powerful team attack that will demolish anyone in your way. All of this together creates a unique battle system that really stands out from the typical RPG Maker game. There’s not much difficulty to it, but it is done well enough so that battles aren’t boring. 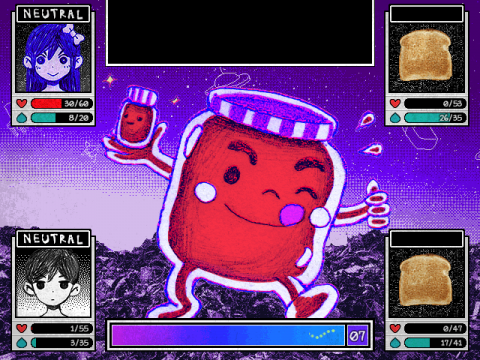 If there’s another part of this game that needs an applause, however, it has to be the presentation. The original RPG Maker UI is completely replaced with a unique look that only Omocat would make. More impressive, however, is the amount of work put into her art. In battle, these characters have their own idle animations for each emotion. If each character has three frames for every emotion they can have, including the different tiers of emotions they can have, we’re looking at well above a hundred different frames of animation, and that’s not including the enemies. With all of this, it’s obvious why the game took far longer to release than initially expected.

Outside of the battles, we’re still looking at a very beautiful game. The sprites are small, but there are many animations, and the color palette used for the game is very pleasing to the eyes. Of course, until it gets creepy, but that has its own impressive art style to it.

Music is a pleasure to the ears, as well. It can be calm and relaxing in the overworld, but can also pump you up in the battle screens. When creepy moments of the game start up, the music can get under your skin and give you chills. Bosses particularly have some of the best tracks in the game, with most of them being electronic and fast-paced. If only the sound effects could have been better, but it’s not a glaring issue. 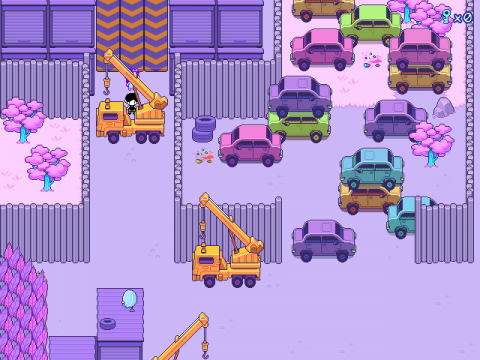 In the end, though, the greatest part of the game has to be the story and its characters. Without giving much away, Omori is a coming-of-age story. These characters change and not always in the best kind of ways, and this is where the topics of mental health and confronting our inner problems show up. It deals with depression, anxiety, regret, suicide, and self-harm. In a way, the horror derives from this aspect, in that it comes from a very real place outside of the game.

Knowing all that, it is still worth picking up on Steam. The way it focuses on these topics that aren’t easy to talk about is very effective, and will leave you thinking about it for days on end.

Because of this, it is very much a game worth picking up. Its battle system, music, presentation, story, and characters are all top-notch, bringing together a fantastic package that makes the five-year wait more understandable. There is an immense amount of side content, and it can even warrant more than a single playthrough. However, even without the side quests involved, it is a full game that will not leave you unsatisfied. Just be sure you’re prepared for an emotional roller-coaster.