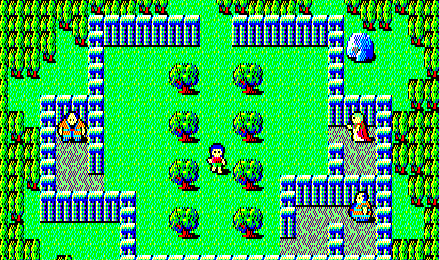 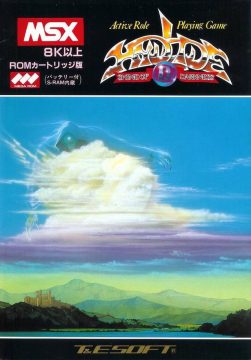 Released in 1985 for the usual range of Japanese home computers, this sequel is the only Hydlide game to never make it Stateside in any form, though it did see an European release with official MSX emulation using WOOMB.

The game’s plot involves an evil crystal, which lies hidden deep underground creating monsters. In a plot device ripped from the Ultima games, the player is summoned to Fairyland from Earth, and sets out to destroy the crystal and put an end to its evil. Varalys, the big bad of the first game (well, the big bad of the first game after the gameplay itself) shows up as a guardian near the end, too. Not too dynamic of a plot, but at least you’re treated to a few screens in Engrish detailing it to a remixed version of the Hydlide theme. 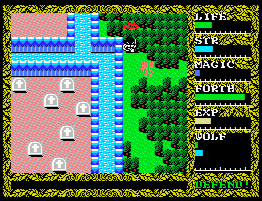 From a gameplay perspectice, Hydlide II isn’t that far of a jump from the original. Once again you can switch between attack and defense and ram into enemies to damage them. In the original Hydlide, you could do marginal damage while in defense mode. Here, there is changed to complete defense. You also have the option of pressing 0 to engage certain friendly “monsters” in conversation. You’ll likely go into attack mode, trade blows with an enemy, then have to recoup out of the way a bit to regain health, and repeat. If you’re in a dungeon with narrow passages, it turns into a slogfest unless you can find ways to evade the enemies.

There are a few more traditional RPG elements, including a couple of towns, complete with places to buy equipment and train the character. This in effect produces a much more grindy game than the original since you’re now fighting to buy equipment as well as merely level up to take on the big bad. 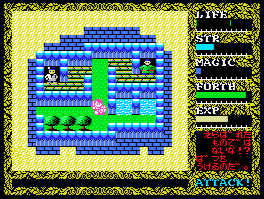 The game first introduces the mortality system found later in Hydlide III. Your character can be aligned with Justice, Normal, or Evil. Like in the next sequel, you lose morality by hurting good monsters and gain it by fighting only evil ones. The distinction between good and evil monsters is a lot tougher in this game, so you can find your morality (labeled FORTH, probably for Forthrightness) dropping quickly if you are not selective in what you attack. For the most part, if it’s human, you’re best off not attacking it. Unlike in Hydlide III, where morality only plays a role in taking out one of the bosses, being evil causes good monsters and townsfolk to ignore you. This in turn denies you clues, equipment, and training.

Training is a new element designed to add depth to the game. While leveling increases your HP, improving your strength and magic statistics requires training. Strength training in particular involves a neat little fighting mini game that has the finesse of mashing “Y” until you win or are knocked clean, placing it somewhere beneath Karate Champ. Your performance in this proto-fighting game and how many rounds you’re willing to go affects your strength gain. Since it takes a while to earn the 3,000 gold needed to increase this stat, you’re likely to repeat this to clear several rounds in a row. Training in magic is more straightforward – a simple exchange of GP for MP. 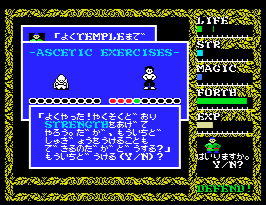 Another unique feature is the Darkside effect. When certain enemies are attacked, they drop a black crystal. While this item is necessary later in the game, holding onto it stops your health from regenerating. It can be dropped, thankfully (by selecting it and hitting “D”), but it’s also a fairly common drop with some of the evil enemies on the overworld. Memories of picking up the Ruby in The Uninvited come to mind, though there’s at least some indication of what is causing your trouble here.

The game also has a time option, allowing you to speed up and slow down gameplay. This would be refined later in Hydlide III with the use of an in-game clock setting day/night cycles and a need to sleep and eat. Here, it merely affects the speed of gameplay and can make leveling and exploring go faster. Unfortunately, the game demands lots of grinding and it’s still a chore even on faster settings. 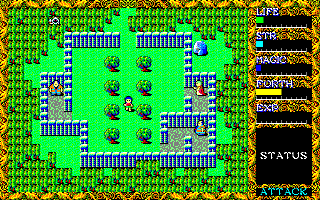 The game still involves the wonderful “puzzles” of the first, including running into random rocks and gravestones to find locations. In dungeons, treasure chests and stairways are invisible, requiring the player to run into the walls/corners to locate them. This adds to both the challenge and the overall annoyance factor of the game. The lack of any clear guides makes progression rather difficult, so if you wish to advance further into the game than around the overworld and the first few dungeons, sawing off a rabbit’s foot or three wouldn’t be a bad idea.

What to make of this game? Its gameplay is pretty unchanged from the first, but it’s a much grander journey. While the first gets a pass as a short, somewhat charming adventure, Hydlide II‘s ambitious scope drags out the game’s flaws – unlike the first one which was a muddy little gem of modest proportions, the size of this game means that the coprolite has not fossilized all the way through, to the woe of the dedicated player. A few important features, time and morality, are carried over to the third game, but this one is much closer in spirit to the first Hydlide, as a opposed to the more Zelda oriented style of play in Hydlide III.

Most of the PC versions are very similar. This is the only Hydlide game that has not been updated or remade for any other platform, except for the 2003 mobile version by Bothtec, which is all but inaccessible to Western players. 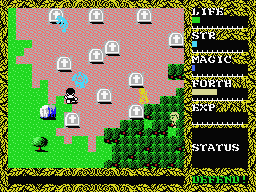