Even though Sega had already put out the Genesis and seeing great success with it, the Master System had a loyal and affectionate fan base which still supported the software coming out well into the ’90s. This was especially true in Europe and South America, where plenty of platformers were exclusively released and given special edition boxes with extras for the passionate fans. At the time, Sega were also in possession of some highly lucrative licenses, such as Asterix and Disney. This led Sega to develop some stellar games like the classic Castle of Illusion Starring Mickey Mouse in 1990, and one year later it was time for Donald to finally get his very own platform game, something fans of his had been clamoring for nearly a decade.

In The Lucky Dime Caper Starring Donald Duck, the sailor suit-wearing quacker must travel the entire globe in order to help Uncle Scrooge, Huey, Dewey and Louie. Magica De Spell has not only stolen Scrooge’s Number One dime, she also stole Donald’s nephews and has locked them up on different corners of the world. Scrooge is distraught and asks Donald to rescue them and retrieve the dime, but Donald isn’t quite up to endangering his life and fight Magica. Once Scrooge promises a huge reward however, Donald boards his plane right away and sets out to rescue his nephews.

The game takes place in two acts. First, there are three predetermined levels to save Huey, Dewey and Louie. Once they are saved, they tell Donald that their lucky dimes were stolen as well and begs Donald to find them along with Scrooge’s dime. This now opens a set of three new levels which can be done in ever which order you’d like. In total there are seven levels, with Magica’s castle being the very last destination. 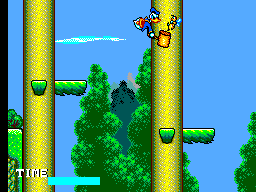 It follows the basic platformer structure, and feels similar to Castle of Illusion in many ways. There are few on-screen stats of any kind and no points shown, rather just a time bar and a power counter. In addition to jumping over the gaps and other environmental dangers, there are many adversaries trying to stop Donald at every step. The main weapon in the game is Donald’s hammer, which he starts each level with. This hammer remains in his possession until he is hit, though he can jump on the top of enemies to defeat them, and they will leave behind bonuses and weapons at random which enables Donald to equip the hammer once again. These bonuses can also be diamonds to improve your high score at the end of the level, 1-ups or stars. The stars is what is used to power up Donald’s weapon. Each star collected shows a small red dot on the left side of the screen. At 1 or 2 stars, nothing happens, but on the third, your weapon gains twice the speed and at 4 Donald becomes invincible for 15 seconds. After picking up 4 stars however, the power resets and the weapon goes back to normal, so it’s wise to avoid picking 4 stars and just keep the fast weapon. Donald can also equip a frisbee, which can be shot in multiple directions.

The levels offers little new in terms of side scrollers. The standard ice, desert, underwater and lava infested castles make their law-required appearances. The level designs also remain fairly straight forward and relatively easy for anyone to stroll through, though there are some hidden treasure rooms that can be found to stock up on some 1-ups and stars, and certain obstacles like vine swinging and steep rotating slopes help to keep the game interesting. All the levels are surprisingly short however, almost at the point where you are surprised that the end stage boss is already in front of you as you have barely even started the level. Each stage has these bosses which is usually a crazy wild animal like lions and bears, though later on you will fight Magica’s minion crows. At the end of each level you will get a high score, and before and after each level there are some colorful and funny cut scenes. 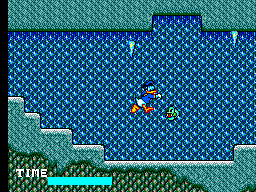 While Castle of Illusion was a fantastic game, Lucky Dime Caper feels a bit off in several ways in comparison. Donald moves so agonizingly slow, and his jump is one of the very worst in Sega platformers. It seems like he is jumping with stones in his pants pockets, and the guy doesn’t even wear pants. You can never get the right momentum, and to make matters worse, Donald slides a lot when landing so you’re sure to hit an enemy or two. The hit frame on the enemies is also extremely narrow, leading to many jumps that seems like it should have killed the enemy, but for some reason does not register. Especially in later stages, where you have to navigate through small ledges with enemies on them and projectiles from all angles, you are bound to take after Donald and flip the rage switch.

It’s almost as if the game was rushed. It certainly feels a bit empty with the lack of onscreen information and some rather empty areas in the game. Lucky Dime Caper is certainly enjoyable at times, not to mention it looks and sounds absolutely fantastic for a Master System game. It doesn’t quite reach the heights of the other games out at the time like Sega’s own Asterix or Castle of Illusion, but for fans of Donald, the flaws can be forgiven and the game has its charm and moments which should keep them happy.

Lucky Dime Caper was only released in Europe and Brazil on the Master System, though the US got a Game Gear version later on. This version is for the most part similar, though with some noticeable differences. The intro is different from the one found on Master System, some music is missing, some level layouts have been changed to fit the smaller screen, bonus items are placed in predetermined spots instead of given by defeated enemies, four stars only gives additional points and Donald does not lose his weapon if hit. Smaller screen aside, this version feels a bit more playable than the Master System version. A special edition box set was also released in Europe, with a t-shirt and cassette tape with various hit songs from Disney movies.