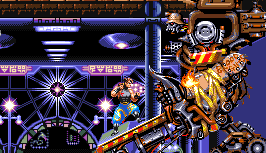 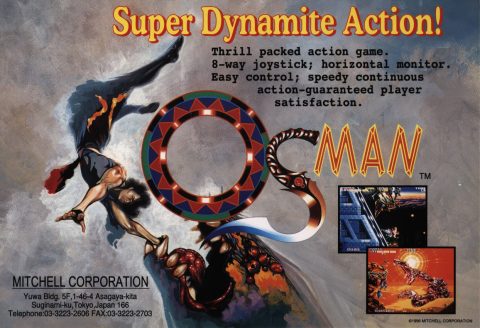 Game companies seldom keep all of their founding members on the team. After his tenure at Capcom, Strider director Kouichi Yotsui (usually credited as Isuke) moved on to Mitchell Corporation, where he developed Osman (known in Japan as Cannon Dancer), one of the most obscure and excellent platformers to be released in arcades. 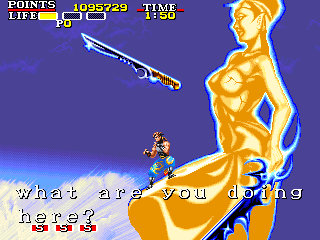 The game centers around a strong young man known as Osman (named Kirin in Cannon Dancer). Not unlike Strider Hiryu, he presumably works for some organization that destroys criminals for the protection of the world. The plot is so ridiculous and confusing that it’s hard to tell what’s going on. Osman’s boss, Jack Layzon (who only wears shorts to show off his muscular form in the opening cutscene for no adequately explored reason), assigns Osman to assassinate Abdullah the Slaver, an evil female sorceress who wants to take control of the world. He does a pretty good job of kicking enemy ass for a while, until Jack betrays him for reasons unknown, and then he has to fight his way through all sorts of soldiers and beasts, as well as a creepy goddess statue. Osman seems to have some connection with her, who apparently commands him to kill and… yeah, it’s all rather confusing. 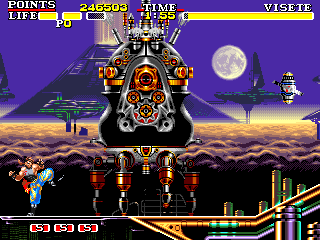 Osman is even more colorful than Strider, with vibrant shades of various hues. The visual design is excellent, ranging from a fortified cityscape to a harsh desert, from the high seas to a mysterious forest, and even the city of Prague, all ending with a fierce battle within ominous crimson skies. The character designers were no slouches either, as Osman is very well animated, and the enemies look beautiful, too. Early in the game, there’s one soldier trapped between Osman and a pit, and the wuss puts his arms up as he cowardly winces away from the wrath the hero is about to bring to him. Besides soldiers, Osman also has to deal with tigers, statues, robots, and sandworms.

The music is less than spectacular, though. It’s not bad, but it just doesn’t seem quite adequate enough for this kind of game. The main reason for that is because the background music is rather subdued. Compare it to the tunes of Strider, which are practically booming out through the speakers. The instrumentation is pretty weird, too, with one of them sounding like there’s a chainsaw going off in the recording studio every few seconds. There’s one truly bizarre piece of music, which involves Gregorian Monk-style chanting that often pops up when a giant statue appears. 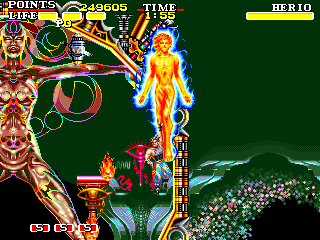 The fast-paced gameplay is the primary subject of comparison of Osman to Strider, as the way Osman moves could cause anybody to mistake him for Hiryu’s long lost brother. He’s able to run down steep slopes extremely quickly, and climb walls with the greatest of ease. Holding down while pressing the jump button causes him to slide, just like Hiryu. Osman’s jump does one thing better than Strider, as he can control himself in mid-air, whereas Hiryu suffers from jumping inertia, where he cannot fly backwards once he jumps forth.

Osman isn’t a total rip-off, as he doesn’t carry any weapons. Instead, he has toned his body to be a weapon in itself. He mainly uses wind-fast kicks (and mixes a few punches in now and then) to crush his opposition, and can cause robots to explode with his bare legs alone. There’s even a slam attack that he can perform on some enemies by pressing the jump button again while he’s already in midair. 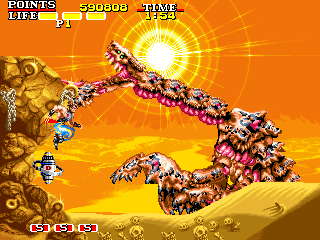 When all else fails, there’s a special attack performed by tapping forward twice and pressing the attack button (Cannon Dancer has a third button devoted to the special). He creates multiple clones to obliterate everything on screen a la Joe Musashi from the original Shinobi.

Osman can take a maximum of four hits before losing a life, and he receives three special attacks per life. There are power-up containers (gray capsules with a P on them) that contain either a red, green, yellow, or blue power-up. Most of these will restore hit points, but red ones will change the color of Osman’s pants and create a shadow duplicate. These doubles stay in place when the attack button is pressed, and they remain in that location for approximately three seconds, before returning to Osman. Additional red capsules will grant a second shadow duplicate, and then increase your strength. 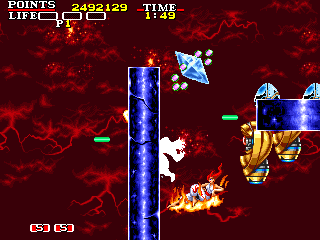 Unfortunately, despite all these power boosts, the difficulty can be punishing at times, even when not dealing with the bosses. Sometimes the amount of regular enemies can be overwhelming, which especially becomes apparent in the forest level, where jetpack guards swoop about erratically while letting loose with their machine guns. What’s worse is that Osman loses a power level each time he is hit.

The most incredible parts of Osman are the bosses – there’s Gamran, a huge robot armed with a buzzsaw and flamethrowers. Speaking of flame, there’s Herio, a man made entirely out of fire who floats about while dumping flames, and has green hands floating about looking to grab Osman. 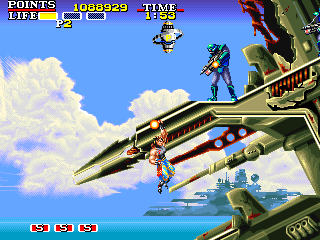 The next three bosses are fought in random order over the third, fourth, and fifth stages. There’s Tianon, the bombshell who can kick as fiercely as Osman and throw him about, not to mention the ability to create explosions. The ridiculously-named Willf looks a bit like Zamza from Streets of Rage 2 and utilizes his sharp claws to shred Osman, and if that fails, he can always toss the floating platform he rides on. The most dishonorable of the three is Cannons, who just teleports around the arena while his gigantic helper mech in the background sends various body parts flying to smash the hero.

The difficulty can be really rough at times, but that’s essentially nullified by the ability to resurrect right in the same spot after dying, not unlike Strider 2. As a matter of fact, this game suffers from the same difficulty balance issues as the official Strider sequel, where the challenge doesn’t matter much to those who just want to finish the game, while those who want to beat it on one continue will find it very hard. 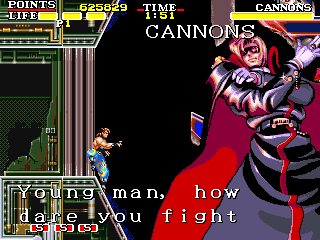 There are actually a few points in the game that require you to go back to a certain point after dying, and the last level actually disallows continuing on the spot, but Osman’s extremely strong special attack is the one thing that ruins the challenge of the boss battles. Just one can slap off 80% of a big baddie’s life, and Osman gets three of them per life. He almost becomes dependent on them to get through the final level, which makes the last battles seem anticlimactic.

The broken challenge curve shouldn’t put anyone off, though. Osman definitely deserves more recognition than it has ever received, which isn’t much, considering that the arcade machine is incredibly rare, and unfortunately no home ports have ever been released, leaving this a MAME-only title.