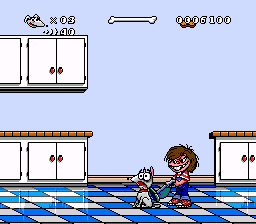 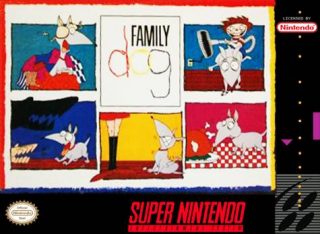 There’s a good chance that you’re not familiar with Family Dog. It was a short-lived TV series that ran for ten episodes on CBS and has a rather baffling history and surprising amount of Hollywood talent attached to it. Family Dog originally ran as a series of three animated shorts on the NBC show Amazing Stories in 1987. In 1993, Family Dog made its return to the airwaves with Steven Spielberg and Tim Burton as the show’s producers, Nelvana doing the animation, and Danny Elfman composing the theme music. Despite having that kind of muscle behind it, its production seems to have been plagued with problems and saw a two year delay from the original scheduled airing. Family Dog had a thirteen episode order, but only ten episodes were ever completed and the show was cancelled after they all aired. You could surmise that there was a lot of misplaced faith in the project because of the talent attached to Family Dog.

Speaking of misplaced faith, it also had an SNES game based on it that released about the same time as the show debuted. This could mean it was in development fairly early on and was held back until the series was actually on the air or, as production faltered on the show, a bit of a rush job game was made to help promote it. It was developed by Imagineering, who had a string of odd licensed games under their belt, including Attack of the Killer Tomatoes, Swamp Thing, and Home Improvement. 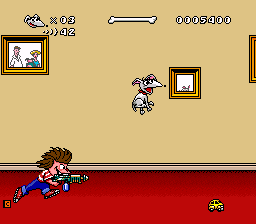 Family Dog is a rather straightforward and simple platformer. The dog handles, in theory, much the same way Mario would. He can walk, run, duck, and jump, with a higher jump if he leaps from a standstill and a longer jump if he begins while moving. The dog’s only defense is his bark, which is a limited resource. You’ll find bones that refill the dog’s life meter and dog treats that fill up the amount of barks, limited to ninety-nine, he has scattered throughout the game.

You start in the home of the Binsfords, the titular family. Anything moving should be considered a hazard. Bouncing balls, flying books, cats clinging to curtains and walls, and Billy, the family’s son, are out to stop you. Billy seems to delight in torturing the dog, something consistent with the show, and you’ll have to avoid him chasing you with a vacuum and a water gun, only to play fetch with him in some bonus stages. It’s a strange relationship. Throughout this stage, you can get by without ever attacking anything. It doesn’t make things any easier, but it is doable.

The second stage has you left at the pound for, what you can only assume, dead. This time you do actually have to combat some of the hazards as there are other dogs guarding some birds in cages. The birds open up your way forward, so each time you come across one, you have bark at the other dog enough to kill it so you can free the birds. Life with the Binfords has truly hardened this dog. 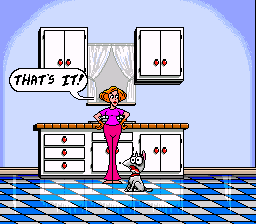 Once outside of the building, you have to go through a rather confusing bit of largely vertical platforming to find a pipe that will let you down to the ground level. Falling down from here won’t kill you outright, but you’ll end up bouncing off barbed wire, hopefully, to an above platformer. Once on the ground, you fight off a few guard dogs, and what seems to be the only human managing the place, to escape.

The third stage is the dog running through some woods to find his way back to his family. The first section is a straightforward shot where you can fight or avoid spiders, bats, and snakes. With the generous amounts of dog treats to refill your barks, this is the easiest section in the game. The second section has you bouncing from branch to branch to rather extreme heights, while you look for the proper tree to fall through. Thankfully, it’s clearly labeled with an exit sign. This section is considerably tougher than the last as you’ll have gigantic wasps following you and bats flying around that you’ll likely find yourself bouncing up into on more than a few occasions. There are enough dog treats and bones scattered throughout this section to keep you from getting in any serious danger, but it can be frustrating trying to find the hole-in-the-one tree you need to get to end this nightmare.

The game ends with the family posing in front of their house and the dog falling from the sky into Billy’s arms. You could watch one episode and figure out that’s the dynamic of the family. The dog loves them unconditionally but the family seems, at best, annoyed at the dog’s existence. Billy tortures the dog at every opportunity and they send him to the pound because the mother was annoyed with him scratching the floor. Why this poor dog keeps coming back for more is beyond reason. 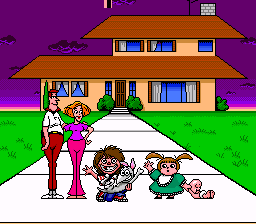 Family Dog suffers from a few issues that make progressing through its rather short length tough. Jumping is a touchy affair. If you try to move horizontally after jumping, the vertical leap will be a horizontal leap, leading you to not reach as high as you may have needed to. There’s no real finesse to it and is something you might find yourself struggling with all the way through. The hitbox also never really seems well defined and you’ll find yourself taking damage from things that seem to be more than a few pixels away from you. The level designs are boring and frequently repeat themselves. You’ll never believe how many of the same bookshelves, chairs, and TVs the Bimfords have.

Was it a case of unintentional lousy design making it tougher than it needed to be, or intentional as protection against rentals? It probably doesn’t really matter as even if the latter is the reason, as this was most likely taking up shelf space at the local video store for much longer than the TV series ran. Family Dog ultimately ended up being one of the causalities in the desperate grab for some of the success of The Simpsons. Both the show and game have been largely forgotten and the game, at least, rightfully so.