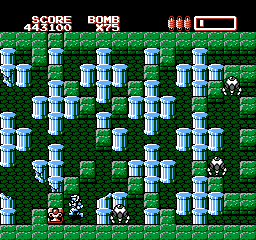 1990 was a big year for Bomberman, but it’s worth taking time to acknowledge 1987’s Robo Warrior (or Bomber King in Japan), seeing as how it’s the first of many spin-offs the series would give birth to. Sort of, that is – the credits of Robo Warrior contain several staff members from EXA Planning (Aicom’s predecessor) alongside members of Hudson Soft, as well as some visual and mechanical similarities to Sunsoft’s 1988 hit Blaster Master (something that the marketing for its sequel in 1991 would lean into), giving this game a serious identity crisis.

To highlight one example of this game’s confusing development, the game was directed by Hiroshi Ota, who would go on to be a designer on EXA Planning’s Angel Kids in 1988, but Toshiyuki Sasagawa, who worked on Bakudan Otoko, returns as a programmer. If you want to tangle up the lineage even further, 1987’s Starship Hector has a similar main theme and allows players to unlock Robo Warrior’s protagonist as a playable character, technically making it a direct predecessor. There’s also a curious absence of Hudson Soft’s copyright on the title screen of the overseas versions, further adding to the mystique. 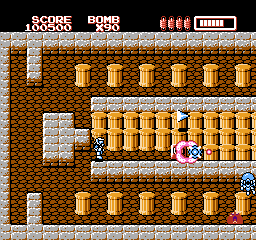 As a spin-off title, the story of Robo Warrior takes place in a completely different canon, ditching Bomberman for a new robot known as ZED, a “Z-Type Earth Defense” cyborg designed to protect Earth from intergalactic threats. The game picks up in the year 2395, where scientists have created an artificial planet known as Altile in order to give the people of Earth an escape as their home veers closer towards ruin. This just trades one problem for another though, as the alien Xantho Empire quickly discovers Altile and turns it into a wasteland, forcing its people to hide underground. Earth receives a SOS from Altile, which prompts them to send ZED to save its people.

In RoboWarrior, you’re no longer confined to identical mazes, the world is stuffed full of soft blocks, and enemies endlessly fly in and shoot projectiles at you. ZED is prepared for the mission though, coming equipped with a gun that can be used to defeat enemies as well as a health bar that allows ZED to take multiple hits. The kicker is that ZED’s health slowly drains over time, requiring the player to move quickly at all times. ZED’s sprite is much bigger than Bomberman’s too, which makes it easy to get skimmed by incoming projectiles. Robo Warrior also takes on a slight RPG-like approach with its scoring system – by earning enough points, ZED’s defense will permanently increase, leading toless costly mistakes and an easier time dealing with the endless onslaught of foes.

Bombs are handled very differently in this game, with them being used less for combat and more for navigation. They’re limited in number now, so they’re best reserved for clearing out blocks. Enemies are guaranteed to drop one bomb upon death, allowing you to slowly replenish your stock if you happen to run out. There’s no way to increase the firepower of your bombs anymore, but they cover a 3×3 radius by default and instantly kill any foes they hit. This isn’t nearly as good as it sounds though, since this particular blast radius feels unsuited to the overall game design.

Bombs explode faster than in Bomberman and while they don’t kill you in one hit, they’ll take off a significant amount of health. The radius and detonation speed make it very difficult to escape bombs in tight spaces or walk through them to advance, so you often have to risk putting yourself in a spot where you’re trapped between a bomb, surrounding soft blocks, and incoming enemy projectiles. ZED moves back a square automatically when placing bombs, which takes some getting used to and can easily get you killed while you adjust to it. Additionally, the corners of the blast radius won’t entirely destroy soft blocks, but explosions won’t pierce through half-destroyed blocks either, making this functionality somewhat useless. 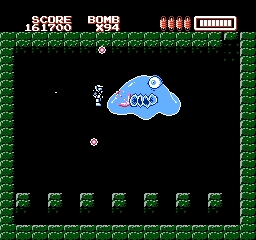 The game is divided into eight areas (or “Periods” as they’re called in-game) with one to three stages each, and your goal is to find a key that opens up the exit at the end of each stage. What makes this complicated is that the key is hidden beneath one of the many soft blocks in each stage with no indication of where it could be. The one saving grace is that the key is always somewhere near the exit and can’t be missed, so there’s no way to make a level impossible to clear. Some stages like to make things extra difficult with the addition of a chalice that needs to be found as well. This chalice is also hidden under a soft block somewhere and if you miss it, the stage will loop indefinitely until you find it. It’s an interesting idea that encourages exploration (which is essential to success in this game), but it can feel extremely harsh until you’ve memorized the layouts of each stage, since the locations of items and other secrets remain the same each time you play. Even when you do get a grasp on the gameplay loop, such a strong emphasis on blasting soft blocks can make the game feel downright tedious when later levels expect you to use dozens upon dozens of bombs just to clear a path.

ZED also has the ability to use a variety of items that can make your life a whole lot easier. There are an impressive number of unique items, and they provide effects such as a 4-way shot, a powerful missile that passes through blocks and kills bosses quickly, and a very welcome means of healing in a pinch. Some items are essential for progression, such as a lamp that lights up stages shrouded in darkness and a life vest that allows ZED to cross water without sinking. Items are found in soft blocks as you’d expect and there are sometimes shops and secret areas that can provide them, but they’re also abundant in the many underground areas that can be found in each level. You’ll need a candle or lamp to see, but navigating them frequently is essential for stockpiling items that’ll make the later parts of the game far more reasonable. 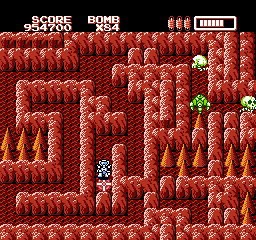 Proper item management and usage is one of the most satisfying parts of Robo Warrior, but it can also be one of its most punishing aspects. If you’re not prepared for some of the specific navigational challenges, you may have to waste time scrounging up what you need and the bosses can be unbearably durable without using items to kill them quickly. It’s possible to stock up on enough items to make yourself nearly invincible, but whenever you die, you’ll lose all of your accumulated score and roughly half of your items, which can bring a player’s oncesnowballing power to a complete standstill. Indeed, Robo Warrior loves to take away just as much as it loves to give.

Robo Warrior shies away from the cartoonish look of Bomberman and leans harder into a sci-fi aesthetic, something that fits well with its darker premise. The monsters you’ll encounter are more intimidating and alien enough to belong in the setting, including exploding slimes, skeletal birds, and spider robots that fire missiles with frightening accuracy. The bosses fit into this mold as well, including a flying chimera, a dragon that emerges from a well, and a golem that throws rocks comically fast-these being just some examples of what you’ll encounter. Vibrancy isn’t sacrificed though, since periods are much more diverse than anything in the previous Bomberman games. You start off in a grassland area and work your way through water-filled levels, ruins, and various futuristic looking locations, most of which use vastly different color palettes and make the planet of Altile feel alive and hostile in equal measure.

The theme that plays for most of the game is a highlight in particular; it’s an extremely catchy earworm of a track that can’t help but invigorate you even as you struggle to survive. Hudson Soft was clearly proud of it as well, since the Japanese version of the game has an unlockable “Theme Song” mode that provides lyrics to accompany the main theme. This mode also ties into a karaoke contest Hudson Soft held for the game’s release, where players were encouraged to send in their performances to get them aired on TV. Ultimately, the theme song is Robo Warrior’s lasting legacy, so much so that it still gets live performances and covers in the modern day. 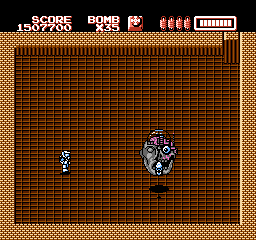 There are a few differences between both versions of Robo Warrior and Bomber King. For starters, the European version of Robo Warrior suffers from noticeably slowed down music due to running at 50hz, though the gameplay itself feels intact. Bomber King is a tougher game overall, since bombs kill you in one hit at the starting power level and dying sends you back to the beginning of the entire period. There are also some visual differences in Bomber King, such as the slimes having a different face and the score and shield power-ups being represented with kanji instead of an icon.

In 1988, Bomber King was ported to the MSX and it’s immediately obvious that the vibrancy of the console game is no longer present, replaced with sprites that contain less detail and fewer colors that make for uglier environments. Everything feels a bit faster as well, including how quickly your bombs explode, making them even more dangerous than they already were. Bosses were toned down significantly and no longer barrage you with attacks constantly. The ending is also different now and is essentially just the intro in reverse. The biggest perk of this version is the ability to save your progress, something that the NES/Famicom versions could have desperately used. Curiously, the box art for this version is nearly identical to Bomberman’s, which is bizarre considering that they star different characters and take place in different continuities.

Robo Warrior is an interesting but flawed game that takes the broad strokes of the Bomberman formula and melds it into something completely different, replacing the intuitive gameplay with something more complex and frustrating. While it’s far too demanding to recommend to most people nowadays, its sequel, Bomber King: Scenario 2 (Blaster Master Jr./Blaster Master Boy in other regions) is far more palatable, retaining its predecessor’s best ideas while toning down its most egregious aspects. While it doesn’t contribute much to the Bomberman franchise, it serves as an example of how fascinating it can be to take the concepts of the series and insert them into wildly different environments, which makes spin-offs worth exploring. 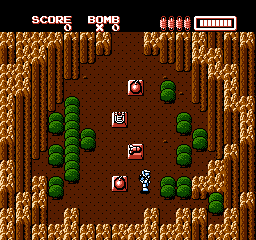 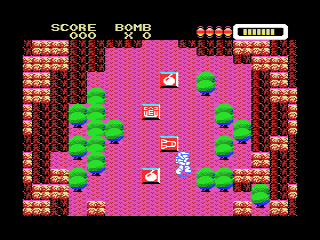 https://bomberman.fandom.com/wiki/Robo_Warrior – Has a translation of the theme’s lyrics

https://www.youtube.com/watch?v=ZU-vHdA3HMs – Live performance of the theme with composer TakeakiKunimoto on the Bass