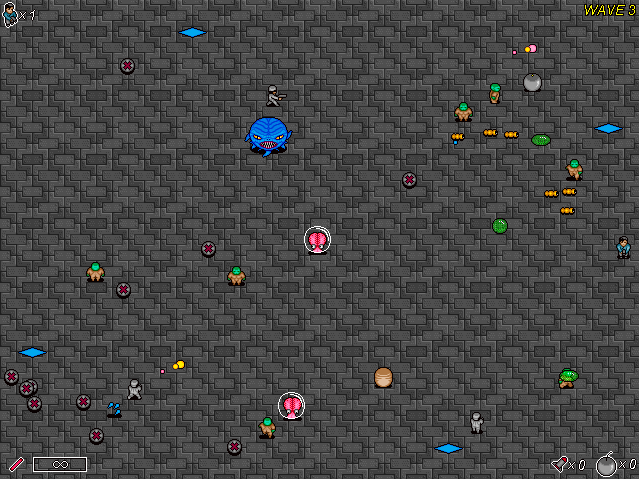 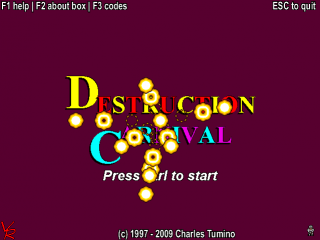 If you’ve been around the internet long enough, you might remember a program from way back when known as Klik N’ Play. People used this interesting, if limited, tool to make their own games, and as you’d expect, most of them were awful. You may be surprised to learn, then that Destruction Carnival is not only pretty much the best thing made with Klik N’ Play, but still a pretty fine game on its own.

The story is simple, as you’d expect from a game of this sort. Agent DS Troy is sent to investigate a planet that the alien warlord Amadeus is hiding out on. Troy gets captured by Amadeus’s goons, but since Amadeus never read The Evil Overlord List, he decides it would be a great idea to give Troy the chance to escape by having him fight his way through Amadeus’s arenas instead of just shooting him. 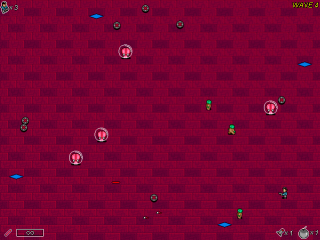 Destruction Carnival isn’t too far off from games like Robotron and Smash TV. In each wave, you’re tasked with shooting a certain number of enemies that come in through the teleporters. Once you’ve killed enough enemies, you move on to the next stage. While you start off with a laser pistol, special weapons will drop out onto the field every so often. You also have a limited supply of bombs and missiles that create explosions big enough to take out multiple enemies at once. The game is split into three different sections, each with three to five waves and ending with a boss fight. The bosses themselves aren’t too tough, aside from the bullet hell attacks the final boss throws at you, but they’re pretty fun to fight.

It’s a concept been done before, but it’s a surprisingly well put together, especially considering the age of the engine the whole thing runs on. For a game inspired by such a quarter muncher, there’s hardly any point where the game actually feels unfair. The game gets hectic, but it never sends so many enemies out at once that it’s unmanageable. The game also does a good job of having a good variety of enemies, but making sure each type is unique and does one particular thing. It’s a little thing, but for a freeware game made in 1997, it’s definitely surprising. It can be a tricky game, since you only have so many lives and no credits, but it definitely feels like every mistake is your fault.

In a way, the game definitely feels like a period piece of what you could expect from these sorts of freeware games. The soundtracks is made up of MIDIs taken from a couple of dozen NES and SNES games, including Axelay, Castlevania, and F-Zero, while the voice acting is clearly done by the game’s programmer. Considering that it’s freeware, however, it’s still surprising just how well it holds up for a game made with a game creation tool from 1994. Some time ago, the game was rereleased as version 2.0, and it behaves much better on modern computers. The game itself is mostly unchanged, aside from adding cheat codes that’ll warp you to the boss battles.