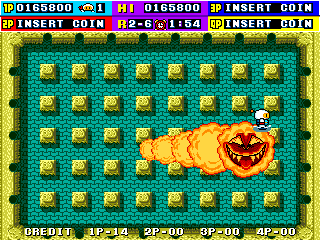 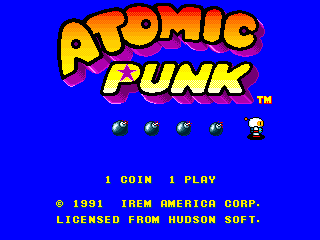 As a result of Bomberman’s continued success, it’s only natural that the series would end up in arcades sooner or later. Instead of Hudson Soft handling the transition to arcades though, Irem would be the ones forking over the licensing fees in order to utilize the Bomberman brand for two games. It might seem strange at a glance, but it was actually a pretty clever move, allowing Hudson Soft to get one of their big names in the arcades while they stuck to their preferred environment of console game development. Curiously, Irem opted to use the Atomic Punk name in the West despite this entry and its sequel having nothing to do with the Game Boy game. As was the tradition up to this point, this game was once again called Dynablaster in Europe and Bomberman in Japan.

Due to the ruthless nature of headhunting at the time, pseudonyms were a common tactic used by companies to prevent talent from getting poached. Irem’s games often leaned hard into this tactic, forgoing credits entirely in exchange for high score boards filled with pseudonyms, and Atomic Punk is no exception. This unfortunately makes it impossible to know for certain who worked on this game, but a few deductions are possible based on what this game’s high score board contains – the pseudonym “MACCOY” would later be credited for graphics in 1992’s R-Type Leo, “NAGOMI” was a programmer on 1993’s Superior Soldiers, and both “OKAMI” and “YORIKO” were involved with Lightning Swords/Ken-Go. Most notable of all is the name “NANAO”, which implies the involvement of Nanao Denki’s software team, the company that took over Irem and used their name for marketing their arcade releases. Another nod to Nanao Denki can also be found in the game’s intro, which contains a cameo appearance from Kickle Cubicle’s protagonist. 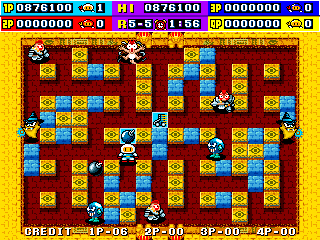 In this take on Atomic Punk, the year is 2091 and watching robots blow each other up in competitions is the hottest sensation. Bomberman and his comrade King Bomber are the strongest team around, undefeated and on top of the world. Suddenly, King Bomber decides to betray both Bomberman and humanity itself, leading into an attempt at a coup on a global scale. Naturally, Bomberman is obligated to put a stop to his now-corrupt partner and he’ll attempt to do so with the assistance of his aptly named brother, “Bomberman 2”. This premise isn’t just for show, as Atomic Punk is the first game in the franchise to allow for co-op throughout its campaign. This dynamic can add a lot to the experience, allowing players to work together to clear stages faster while simultaneouslyhaving to be more cautious of their actions. The North American and European versions allow four players to play together, something that the story doesn’t take into account but is a great idea nonetheless.

Mechanically and visually, this game veers pretty close to the 1990 PC Engine release with a colorful presentation bolstered by arcade hardware and minimal adjustments to the core gameplay. Bomberman is even more expressive than he was previously, with his new reaction to getting blown up being a notable highlight. The Bombermen in general have also been slightly redesigned, opting for a meaner look and big shoulders that make them look like robotic football players. Enemies are similarly detailed and now have additional animations and expressions to go along with their attacks as appropriate. Stages are vibrant but ultimately somewhat bland overall, since they lack any kind of strong theming or notable hazards that would make them memorable. Several stages in the international versions do differ from the Japanese version though, making a playthrough of both versions more worthwhile. There’s only a few tracks on offer to accompany the six worlds, but they’re jaunty and catchy enough to be effective the entire game. The music has something of a circus-like vibe to it, which feels fitting considering the whole scenario is essentially just a show put on the for the amusement of its viewers, despite its high stakes. 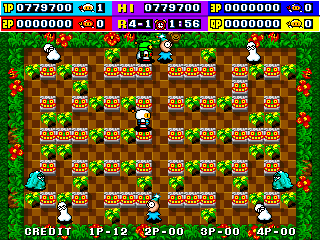 One of the biggest changes to the formula here is that power-ups no longer carry over between stages, forcing players to scavenge a bit at the start of each level. This isn’t as bad as it sounds, since power-ups are now extremely common and pop out of most soft blocks. Power-ups are scattered around at the start of boss fights as well, always resulting in an immediate scramble to get prepared for the fight. Because of the abundance of power-ups, no player is ever left out to dry and the game now has a faster pace bettersuited to the arcade environment. The other major change for this installment is that there are no longer exits, so advancing to the next stage is a matter of defeating all of the enemies. This change makes sense for an arcade experience, since spending time blowing up soft blocks to find an exit might result in players getting bored and giving up before they get to the more exciting stages. Overall, these are smart changes; it’s a lot easier to convince people to put money into your machine when they can get powerful enough to blow everything to smithereens in a matter of seconds.

The enemies you’ll encounter have been made more dangerous than ever to compensate for the new power curve, resulting in a game that’s more challenging than previous entries even with the ability to continue and respawn on the spot. Foes are consistently aggressive and some opponents, like the armored warriors, will hound you immediately as the level starts, often resulting in what feels like a cheap death in a matter of seconds. It’s not as easy as just bombing them first either, since once they’re hit, they’ll lose their armor and start running around in a panicked fashion, making it all the harder to pin them down for the finishing blow.

Other foes come packing dangerous tricks too, such as dinosaurs that breathe fire as soon as they notice your bomb, potentially setting it off while you’re still in range. International players also have to contend with the Robo-Bomber, a Bomberman clone who appears in almost every stage and tries to trap the player with their bombs. Forcing a bit of the multiplayer dynamic into the main game is a cool idea, especially since the battle mode was removed for the international releases, but the Robo-Bomber ultimately isn’t much of a threat and has a bad habit of blowing himself up. It’d be remiss not to mention the most unforgettable enemy of them all – a living penis that has the ability to make itself invulnerable via self-immolation! Unfortunately, this fellow does not return for the sequel. 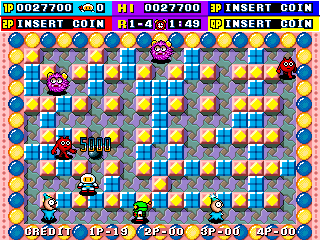 Bosses have been notably improved here compared to the ones present in the 1990 PC Engine title. Each one is unique and far more distinct, including things like a snake-like fog creature that lunges at you and a star that bounces around the screen, and they all put up far more of a fight due to the game’s faster pace. They’re still straightforward in terms of strategy, but it’s no longer possible to run through them with remote bombs in seconds, requiring you to engage with them properly. The only disappointment is that the showdown with King Bomber is essentially a rehash of the Black Bomberman boss fight from the previous game.

If you’re playing the Japanese version of the game, a Battle mode is also available that allows up to four players to duke it out in the same fashion as in previous games. The biggest innovation here is that you can now play against CPU opponents, making this the first entry in the series to let you do so. Aside from a unique intro and battle arena, the gameplay here is as you’d expect, with the first Bomberman to get three wins being crowned the winner.

With a series as prevalent as Bomberman would become in the 90s, not every entry can be expected to push the envelope. Atomic Punk doesn’t offer many surprises even with a totally different developer behind it, but its co-op and versus AI features were strokes of genius on Irem’s part and would appear in many future entries from here. It’s not an essential entry by any means, but it’s still one that’s worth going through, especially if you’re ever lucky enough to stumble upon a machine in the wild with some buddies in tow.