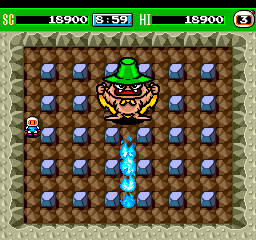 After a couple of outsourced arcade experiments and a last hurrah on the Famicom, Hudson Soft returned to the PC Engine for the next entry. Bomberman ’93, a name that openly declares Hudson Soft’s intent to make Bomberman a yearly thing, is no mere obligation or rushed effort – this is the best game in the series yet, offering the most well-rounded campaign and most exciting multiplayer action the series has seen up to this point. Hudson Soft would remain true to their intent (at least in Japan) and the franchise would continue to see yearly entries up until the 2010s. Remarkably, this consistent churn didn’t compromise the franchise’s quality for a long time either, as several of the games released throughout the rest of the 90s are widely considered to be the best entries in the franchise, a testament to the talent at Hudson Soft.

Much of the talent that worked on the 1990 PC Engine game returned to work on this entry. This includes game designer Tsukasa Kuwahara, sound programmer Keita Hoshi, director Shigeki Fujiwara, and of course, Jun Chikuma as composer. As a result of this united talent alongside some new faces like programmer Tetsuya Wakabayashi (who would go on to be one of three programmers for Saturn Bomberman), Bomberman’93 closely retains the feel of the 1990 entry while improving upon it in all the right ways. 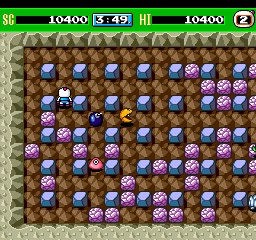 The story takes place on a galactic scale now and White Bomberman has found himself a job as the star cop of the Pan-Galactic Federal Bureau. Black Bomberman, on the other hand, hasn’t changed a bit, enacting a plot to steal the seven chips needed to power the bureau’s mother computer. White Bomberman gives chase, but Black Bomberman manages to scatter the chips between seven different planets, making a mess of things. This serves as the impetus for White Bomberman to investigate each of these planets, survive their challenges, and find the chips in order to get the mother computer up and running again.

While this game’s 56 levels spread across seven worlds isn’t the largest amount offered up to this point, they are the most complex level designs yet by a significant margin. Each world has typical themes, such as the usual water, fire, and ice environments, but each one also has multiple types of hazards and more elaborate block arrangements, leading to playing fields that feel far more thoughtfully designed than before. For instance, Planet Inferno divides some of its levels into multiple smaller islands, requiring the player to teleport between them. Levels on this planet are also littered with special tiles that you can’t place bombs on, potentially leading to moments where you can’t defend yourself in the face of a pursuing foe. 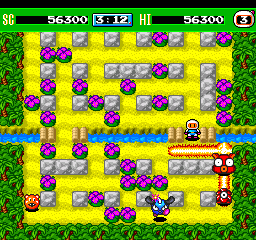 Planet Wither, the desert planet, carries the teleporters forward (now dressed up as quicksand whirlpools) but also throws in regenerating soft blocks. Planet Surf introduces turnstiles that force players in one direction, so they’ll need to take these into account lest they trap themselves in an inconvenient location. The final planet, Planet Techno, takes all of these concepts, introduces conveyor belts, and tops it off with large enemies capable of multiplying after they’re destroyed, resulting in a hectic batch of stages that properly tests everything you’ve learned along the way. It’s a much more satisfying finale than the series has provided to this point and the three phase boss fight against Black Bomberman makes for a properly climactic final act compared to the anticlimax of Bomberman II.

Boss fights are the other major improvement in this entry and they’re leagues ahead of the offerings of the 1990 game and the two arcade games. At the start of each world, the player is provided directions on how to beat the boss via a computer that Bomberman accesses. This might seem unnecessary, seeing as how you only have one means of attack, but it makes sense when you realize that each boss is far more varied and dangerous this time around. Simply bombing them fast enough is no longer an option because bosses are now capable of defending themselves from constant aggression. 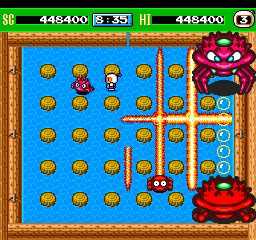 For example, Blastbat, the boss of Planet Inferno, is immune to damage whenever it’s flying, requiring you to time the placement of your bombs so that they explode when the boss is briefly grounded and vulnerable, all the while avoiding its long range fire breath attacks. Grumpus, the yeti boss of the Icicle Planet, rides atop a UFO-like machine and is only vulnerable when he stops moving after his charge attack. His sprite is huge though, so avoiding him is harder than it sounds, and when he starts summoning smaller yetis to harass you, you’ll need to find a way to weave between them while sneaking in hits to end the fight before you’re overwhelmed. Planet Surf is perhaps the most audacious of them all, throwing two bosses at you simultaneously in a tiny room! It’s remarkable how boss fights have been upgraded from a novelty to the highlight of the game, and this change in design philosophy also serves as a solution to the lacking challenge of the previous few console entries; it’ll take more than just remote controlled bombs to emerge from these fights unscathed.

Only a few new power-ups are introduced in this game, one of which is just a speed decreasing “power-down”, but two of them are among the franchise’s most important mainstays. The line bomb seems like a strange power-up at first, granting you the ability to immediately drop all of your bombs in a straight line in front of you.This naturally means that several of your explosions are going to be stopped by hard blocks whenever you use it, but the secret lies in using it as a deterrent for approaching opponents or as a way to eliminate foes from afar. During multiplayer, forcing another player to take the long way around your wall of pain gives you a chance to escape or catch them in a bad position, and since a lot of enemies in the campaign like to charge at you when they spot you, having a way to take them out from a distance while blocking their line of sight is a much safer option. 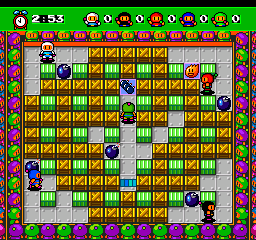 Making the most of the line bomb does require you to have acquired several bomb capacity power-ups first, though. The other major power-up is the bomb kick, which allows you to push bombs forward simply by walking into them. Bombs travel until they hit something, meaning this ability has even more range than the line bomb in the right environment. Bomb kicking is a powerful multiplayer option when mastered; knowing how tokick bombs so that they explode right when they reach an unsuspecting player is an excellent way to rack up some victories while letting your opponents know there’s nowhere to hide.

At a glance, Bomberman’93 looks very much the same as its PC Engine predecessor, but the devil is in the details when it comes to its improvements. A lot more personality has been injected into the bosses and Bomberman himself thanks the addition of some lovely images that follow each boss fight. The chips that power the mother computer apparently have the ability to turn creatures violent, since reclaiming the chips causes them to act friendly towards Bomberman afterwards. You’ll see Bomberman share a meal with them, take a page from their wardrobe, and even cuddle with them, and it’s an adorable reward for making it through each planet. Some of these images were altered slightly in the North American release, including the removal of a kotatsu and exchanging onigiri for a donut in typical localization fashion for the time.

Every planet has a host of unique enemies now, and while many of them share similar tricks, namely the ability to move through soft blocks, their appearances vary wildly, including things like giant wheels, a happy looking seal, and a walking bomb with floppy dog ears. This cavalcade of goofy looking enemies gives each planet a unique ecosystem and makes things feel more alive than it ever has before, enticing players to further explore the game’s mysteries. 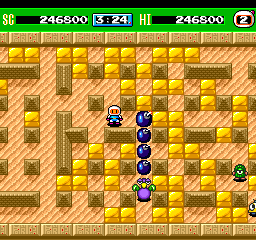 The soundtrack of Bomberman ’93 takes a different approach, opting for moodier tracks that set a particular atmosphere once you get past the first planet and its more conventional song. A standout example of this appears on the screen showing your progress across the game’s seven planets, which features a downright mysterious and ominous sounding track, implying that just about anything can and will happen as soon as you land. It’s an interesting choice, and while it means the soundtrack isn’t quite as catchy as some of the music offered in its predecessors, it also gives Bomberman ’93 a more distinct identity. Some familiar motifs do return in the track used for Planet Techno, which uses part of the main theme from the 1985 game in order to segue into a more dramatic tone fitting for the final planet.

Battle mode is more robust than ever before while retaining the ability to play with five players and support for the TurboExpress’s link feature. The ability to play against AI has been carried over from the arcade games and now you can even have AI opponents duke it out amongst themselves. It might sound strange, but it can actually be a lot of fun to pit five CPUs against one another and bet on which one will win with some friends, so it’s a welcome option. Instead of just one arena, there are now eight of them, each of which implements at least one of the hazards from the main game. A more traditional map devoid of hazards that visually resembles the 1985 game is an option for those who find hazards distracting. Some of the arenas also utilize unique environments not seen in the single player campaign, including clouds, a toy store, a city, a warehouse, and a starship. Sudden death is also now a thing for the first time, triggering when the clock hits one minute. Once sudden death starts, hard blocks will rain down from the sky, quickly narrowing the arena and making it easy for players to either get squashed or get trapped with nowhere to run. This was a smart addition to the formula since it incentivizes players to play with some degree of purposeful aggression and end rounds before the game tries to do so indiscriminately.

Initially, Bomberman ’93 was only released in Japan and North America in 1992 and 1993 respectively. A port of the game was included on the PC Bomberman Collection, but this too was limited to Japan and North America. It wasn’t until 2006 when Europe would get the game, thanks to the Wii’s Virtual Console, and Australia would get it a year later as well. Subsequent re-releases on the Wii U Virtual Console and the TurboGrafx-16 Mini have ensured that the game is at least somewhat more available than it used to be.

Much like Bomberman: Users Battle, Hudson Soft distributed a modified version of Bomberman ’93 to tournaments and demo kiosks for the sake of highlighting its multiplayer mode. Naturally, that makes this version incredibly limited and rare (estimated to be around 1,000 units), but like Users Battle, there isn’t anything here that’s necessary. The single player mode has been completely removed and some aspects of the multiplayer have been downgraded, namely the removal of sudden death and the removal of AI opponents as an option. The only other changes of note include some slight adjustments to the UI and the locations of some options. 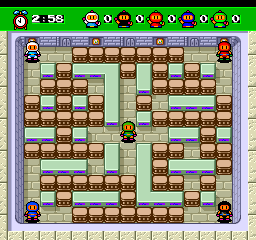 http://randomhoohaas.flyingomelette.com/bomb/pce-93/misc.html – Information on the Special Version