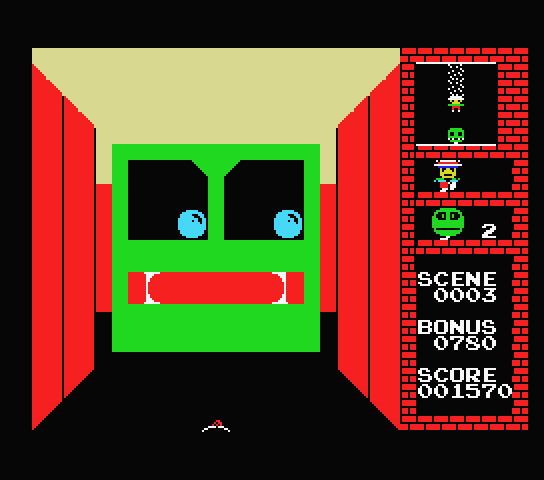 It wasn’t unusual for sequels in gaming’s early years to try something completely different instead of iterating on established ideas. The most notorious examples like Castlevania II: Simon’s Quest and Zelda II: The Adventure of Link still stand out as daring experiments to this day, but Hudson Soft had beat them all to the punch in 1984. 3-D Bomberman takes the action of the 1983 game and frames it in a first-person perspective, channeling the likes of 3D Monster Maze and Tunnel Runner in the process. This is particularly notable within the context of the Bomberman franchise as a whole, since no other game in the series would go on to attempt this again. Bomberman: Act Zero does have a “First-person Bomber” mode, but it just moves the camera closer to your character and isn’t actually first-person at all. Whoops!

The programming this time, according to the title screen, was done entirely by “Kawaguchi” instead of Toshiyuki Sasagawa and Y. Tanaka. There’s no concrete information regarding this game’s development on the internet, but it’s possible the person credited here was Yoshiyuki Kawaguchi, since they were involved with course editing for Hudson Soft’s Super Mario Bros. Special in 1986 (which was also exclusive to Japanese computers) and went on to be the director of Mega Bomberman in 1993. 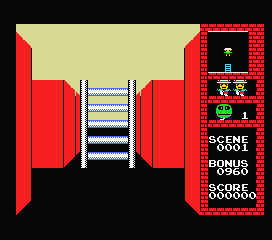 At its core, 3-D Bomberman could be considered a remake of its 1983 predecessor, since everything from that game is present here – you navigate randomized mazes, kill balloons using bombs, can find an exit and treasure, and the ability to utilize half-spaces to partially break soft blocks returns as well. Naturally, the perspective changes much about the game, from the way that you interact with the game to the atmosphere the game gives off. Your field of vision is pretty limited, making it far more difficult to plan out moves in advance. Players are now given a radar in the top right corner to compensate for the lack of a bird’s eye view, but it only shows the relative distance between you and something and enemies won’t show up at all if they’re too far away. This often results in a deceptively clear radar display, despite the danger lurking around every corner.

The balloons work the same way as they do in the previous game, but the system simply doesn’t function as well in this environment. Since you’re unable to monitor what your foes are doing from a safe distance, there’s no way to prepare for them ahead of time, leading to panic-induced bombing sprees being the only feasible reaction in most cases. Additionally, the balloons are now always aggressive, so the distinction between their statesexists only for scoring rather than for strategy. The balloons themselves are much more menacing now – they’re big enough to consume an entire tile of the maze and when they catch up to you, they cover the entire screen and rub in the fact that you’re dead. It’s quite a shock the first time you see it, and it’s the only time Bomberman approaches horror in any sense, so it makes for a uniquely claustrophobic, intimidating experience. Also worth noting is that exits actually work as you’d expect them to now, so attempting to frantically find the exit as you avoid your creepy pursuers only adds to the tension. 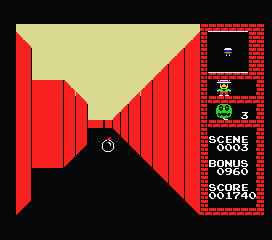 While everything about 3-D Bomberman lands aesthetically, the experience begins to show its seams the more you play it. Movement is smooth and the game feels reasonably paced, but too much information is obscured to really allow for an appreciation of the game’s bold new direction. The distinction between soft blocks and hard blocks was immediately obvious in the previous game, but for some reason, every block here looks the same, resulting in progress being a matter of guesswork. Determining which blocks to destroy first was an essential strategic element in Bakudan Otoko, so it’s a bit baffling that it was made so unreliable here. In general, the difficulty feels poorly balanced this time around as well – each level has your foes gradually increase in speed, much like Pac-Man, but whereas that game gave you the proper mobility and level design to handle the upward curve, here it feels far too easy to get killed in a matter of seconds without any indication that the enemies have sped up.

Based on the general lack of acclaim, it seems Hudson Soft wasn’t particularly confident or satisfied with 3-DBomberman’s performance, resulting in it being ported to a smaller batch of Japanese computers and forgoing a European release entirely. The MSX version is probably the one that’s easiest to try out nowadays, but it’s arguably the hardest to do well in. This is because the radar in this version is much smaller than in the other versions, covering only a small part of the top right corner. As a result, navigating your surroundings and bracing for approaching balloons becomes even more difficult, and placing bombs contains more inherent risk due to it being more difficult to orient yourself. The floor is also black in this version, which makes your bombs blend in a bit, further reducing general readability.

The Sharp X1 version is actually an improvement this time around. The radar here is much larger and shows nearby enemies sooner, making it far more useful at all times without compromising the main screen. Both your bombs and the floor are a brighter blue color in this version, helping with readability, and the general presentation is bolstered by a splash screen at the start showing Bomberman being chased by a balloon. All of the other versions appear to be similar to this one, making it the recommended choice for those curious. 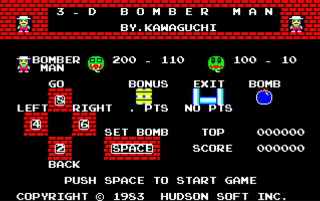 Three more versions of the game exist for the PC-6001, PC-8001, and FM-7 computers, but they’re incredibly elusive and seemingly unpreserved online. Thankfully, there are a handful of Japanese websites and Youtube videos that showcase these versions to some degree. Both the PC-8001 and FM-7 versions remain very close to the Sharp X1 version in their presentation, with the only notable difference being the PC-8001 version using a garish green for both the maze floors and for Bomberman’s hair.

Things become more interesting with the PC-6001, which has immediate differences compared to the other four versions. Bomberman’s design here uses a mostly red outfit, providing parity with the PC-6001 port of the original game. Voice samples return for this port as well and play when starting the game and after losing all of your lives. The most notable change however is to the radar – in the other versions, the radar clearly shows the sprites of Bomberman and his opponents, but for this version, they’re reduced to small dots. While this change makes for a less useful radar, a new box is provided that shows the direction Bomberman is currently facing, which helps greatly with orienting yourself. It still feels like a downgrade, but not necessarily a drastic one.

Hudson Soft obviously didn’t give up on Bomberman here, and thank goodness they didn’t, because the next game is the one where they finally figured things out. While 3-D Bomberman and its predecessor were essential for establishing the core fundamentals of Bomberman and determining what does and doesn’t work with the concept, 1985’s seminal release was the one that became the gold standard and the template that would be followed for decades, catapulting the franchise head-first towards years of success.

https://akiba-pc.watch.impress.co.jp/docs/column/retrosoft/1150994.html – Article talking about the PC-8001 version (with screenshots)

https://www.youtube.com/watch?v=ZNvozSMP8Eg– Examples of the voice samples in the PC-6001 version

https://www.youtube.com/watch?v=FnpeimtLU44– Footage of the PC-6001 version in action

http://fm-7.com/museum/softhouse/hudsonsoft/500707400.html – The only evidence of the FM-7 version available online