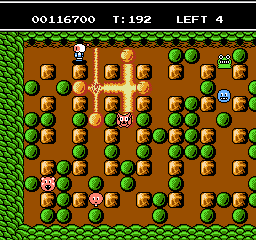 Even after the Super Famicom was released, Hudson Soft continued to support its predecessor, and so they saw fit to bring the franchise back to the platform one last time with Bomberman II. Depending on your perspective and home region, this game is either a welcome upgrade or a somewhat middling entry overall. Taken as the “true sequel” to the 1985 Bomberman, it offers a lot more, featuring more environments, additional storytelling, significantly improved graphics, and multiplayer support. On the other hand, all of these things have been done before by previous entries like Bomber Boy and the 1990 PC Engine entry, so for those who owned other consoles, Bomberman II struggles to find its place in the franchise. It’s also worth noting that the 1985 game wasn’t released in Europe at the time, so this was the first entry on the NES that PAL territories got and as a result was renamed to – you guessed it – Dynablaster. 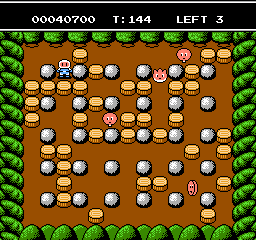 Like with several of the previous entries, Bomberman II was helmed by multiple individuals who would go on to engage with both Bomberman and Hudson Soft’s other releases in increasingly significant ways. The main programmer of the game was Yasuhiro Kosaka, who would go on to be the programming director of a few JRPGs like TengaiMakyo: Fuun Kabuki Den and Elemental Gimmick Gear, all of which are significantly more complex when compared to what’s on offer here. Hitoshi Okuno did double duty as both the lead game designer and one of two sound programmers, though he wouldn’t become involved with the series again until Bomberman 64 in 1997.

On the other hand, this would be the start of a long journey for fellow sound programmer Osamu Narita, who would go on to handle sound design and production for six more entries in the series as well as a significant portion of Hudson Soft’s future output in general. Producer Shigeki Fujiwara would also undergo a similarly lengthy career trajectory as a director and supervisor for many Bomberman games in the future. The reason to highlight all of these individuals is to acknowledge what is perhaps Bomberman II’s biggest contribution – it’s effectively a starting place for several important figures within the franchise, so even if its gameplay doesn’t provide anything new and exciting, the experience gained here by the staff would inform some of the franchise’s most beloved entries.

Black Bomberman is once again up to no good, except this time he’s trying something a bit lower key than a Dracula-style abduction – robbing a bank, of course! White Bomberman is a victim of circumstance as he stumbles upon Black Bomberman’s escape from the crime scene, only to get framed for it after the cops arrive. Now in jail for a crime he didn’t commit, White Bomberman decides to blast his way out of jail (probably not a great idea to commit crimes while trying to prove your innocence!) in order to catch Black Bomberman and force him to confess. This time around, the story is accentuated by brief images between the six areas that show White Bomberman’s journey from his imprisonment to his return to civilization, and while they aren’t animated and don’t have any dialogue, they do a good job of providing a bit of context that makes progression more rewarding. The biggest letdown with the story is that there’s no climactic confrontation with Black Bomberman – once you’ve completed all six areas and returned to the scene of the crime, he just grovels at White Bomberman’s feet and that’s that.

As a late Famicom release, Bomberman II looks remarkable, managing to capture nearly every aspect of the PC Engine game’s presentation despite the age difference of the consoles. Mika Sasaki, the graphic designer of the PC Engine game, returned for this entry and is likely part of the reason the team was able to capture the 16-bit aesthetic so well on an 8-bit console. While the environments are bland and lacking in detail, Bomberman’s sprite is nearly identical to his 1990 incarnation, and all of the animation flourishes for him and his foes alike remain present as well. The soundtrack is also a bit more robust than its predecessor, as Jun Chikuma (now credited as “Atsushi Chikuma”) utilizes the Famicom’s sound channels in a way that reproduces the drum beats found in its PC Engine counterpart, resulting in peppier tracks overall.

In terms of gameplay changes, there isn’t much Bomberman II does to iterate upon its predecessors. Bonus stages from the 1985 game are back, but they’re accessed in a different way, requiring you to find a power-up in the sixth stage of each area. They’re mostly the same as they were previously, but now extra lives can be earned by making contact with a White Bomberman clone that runs past a couple of times. The fireproof suit now has two versions to be found – one of them lasts for 30 seconds but still allows for explosions to push Bomberman away (this can be utilized for some fun movement tricks), and the other only lasts 15 seconds but makes Bomberman truly immune to his bombs’ explosions. Hudson Soft has also caught onto the sheer centralizing power of the remote control and now rewards players for holding onto it via the mystery item, which provides remote control wielders with points, an extra life, or a fireproof suit at random. There are a handful of new foes as well, though most of them don’t really do anything beyond moving through soft blocks, which is old hat at this point. The one standout foe is the frog, which can transform into a bomb and explode, making it the only opponent that can attack at range and protect itself from damage simultaneously. 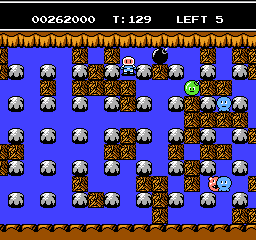 Sequels during this era of gaming often chose to provide an experience specifically for expert players, but Bomberman II goes in the opposite direction and is the easiest game in the series thus far. Many of the enemies you encounter return from the previous games, so there aren’t any new strategies you’ll need to employ. Even with the addition of the larger scrolling stages from the PC Engine game, most levels are very easy to clear out in seconds once you’re powered up. Bosses have been completely removed, so there’s nothing left to keep you in check once you’ve gotten the hang of things. Bomberman II is a shorter game as well, featuring only 48 stages compared to the 1985 game’s 50 stages. The low difficulty and lack of substantial additions are ultimately what makes Bomberman II’s single player mode duller than the rest, which is an unfortunate way to send off the console that gave the franchise its breakout success.

If the single player isn’t your cup of tea, there’s always the multiplayer mode to hold you over. With the 4-Players Adapter/NES Four Score, it’s possible for up to three people to play together, though it’s both odd and a shame that four players apparently wasn’t possible. If you only have two players, a specific “Vs. Mode” allows for a 1v1 confrontation, whereas the “Battle Mode” is intended for three players. Unlike Atomic Punk in the arcades, AI opponents aren’t an option here, so you’ll need other humans to make any use of these modes. Curiously, Black Bomberman isn’t playable in multiplayer and is instead replaced with the Red and Blue Bombermen. 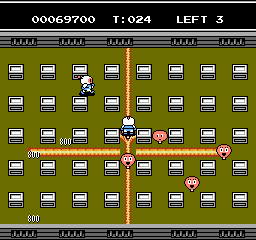 As was standard for Nintendo’s censorship policies at the time, a cross atop a church steeple was removed for the international releases. The content of each game is otherwise identical, but the European version runs at 50hz, making it sound slower and unnatural to anyone used to the other versions. Bomberman II was included on the GBA’s Hudson Soft Best Collection Vol. 1 without any additions and with the multiplayer modes removed, making the portability its only real selling point. Aside from this port though, Bomberman II has remained very much in the background, not even appearing on Nintendo’s Virtual Console or Nintendo Switch Online services, making it one of the more elusive console entries in the modern day.