Atomic Punk marks the Bomberman franchise’s first portable entry and it’s a strong return to form after five years. By taking the gameplay of its Famicom predecessor and adding new environments, variables, and an economy, it succeeds in providing an impressively robust package for its platform that still stands as a solid entry to this day. This game would also be the start of some bizarre branding and canon shake-ups, which ends up creating a Wonder Boy-esque naming conundrum for several future entries. In Europe, the game was called Dynablaster and the original Japanese version was known as Bomber Boy. The Dynablaster name specifically gets reused as-is multiple times for European releases in the series, making it a bit confusing to identify certain entries.

According to the game’s North American manual (the only resource that provides any kind of storyline to the game), you play as Atomic Punk, who’s known as “Kid” in-game and is the identical looking son of Bomberman, who has been retconned into being a robot again. The story now takes place in the world of Atomica, which has been invaded by radiation thieves known as Nukies that have imprisoned Atomica’s denizens. Atomic Punk decides to take the fight to eight different factories scattered across Atomica in order to free his people, whereas Bomberman heads underground once again. The premise is strange for a multitude of reasons (How do robots have kids? How would you even go about stealing radiation?), but it does at least provide a creative justification for having both a new game and a full port of the 1985 Bomberman in one package. Two more games would go on to use the “Atomic Punk” branding in North America, but they drop the story, characters, and world established here for something completely different.

Some of these creative differences are likely a result of the fact that Atomic Punk is backed by a vastly different team of Hudson Soft members. The game was planned and programmed by Toshimasa Ebina, who would later work on some of Falcom’s PC Engine CD titles like Ys IV: The Dawn of Ys, and Takahiro Haga, who ended up taking the reins as director of Tengai Makyo III: Namida. Character designers Koji Matsuura and Hisao Okada would remain with Hudson Soft long enough to work on several entries in the Mario Party series, and Koji Matsuura in particular would become the design director of Super Bomberman 5. Atomic Punk has a more diverse soundtrack than its forebears thanks to the work of Yasuhiko Fukuda, and he would go on to compose for the Bomberman GB trilogy as well as three entries in the Super Bomberman quintology. While his work for the franchise isn’t as prolific as Jun Chikuma’s, his efforts are rather solid, providing a soundtrack for Atomic Punk that’s upbeat early on and becomes moodier as you approach its more harrowing stages.

Upon starting Game A (or “Bomber Boy” mode if you’re playing the Japanese version), you’re greeted with a world map that presents one of this game’s biggest innovations. Instead of being dropped into stage one, you now get to choose the order in which you tackle the eight themed factories that contain the game’s stages.  Not all factories are created equal though, as they contain a differing number of stages to be cleared as well as completely different hazards, visuals, and enemies to deal with.

Some factories are clearly meant to be early targets, such as Hevol, which only has five stages and no environmental hazards to worry about. Other factories are far more interesting, such as Grad, which divides each stage into small quadrants that you’ll have to use teleporters to move between, and Windria, a challenging wind-themed factory that harries the player with wind currents that push you in different directions. The one exception to this nonlinear approach is Faria, which must always be the eighth and final factory you challenge. Faria replaces the indestructible blocks that populate each maze with flames that’ll kill you on contact, so even basic movement becomes a terrifying prospect.

On the world map, you also have access to a shop where you can buy power-ups in exchange for gold, which is earned by clearing stages quickly and is also doled out based on how many soft blocks you destroy. At first, you only have access to the usual bomb capacity and firepower boosts, but clearing each factory will unlock a new power-up at the shop, greatly expanding your options. The harder factories are generally the ones gating access to the better power-ups, prompting the player to decide if they’re willing to accept a greater challenge early on in exchange for a greater reward. Power-ups can still be found by blowing up soft blocks, but they’re rare and not in every stage.

All of the items from Bomberman return along with some new options, such as a clock that gives you more time to clear a stage. The elixir item is the most important of the newcomers and is unique in that it has two functions – elixirs allow you to take a hit instead of dying (this would be replaced with the heart item in later games), but they also serve as your lives. If you use up all of your elixirs and then die, you’ll get a Game Over and will have to redo the factory from the beginning. Passwords return in this entry, allowing you to preserve your progress and stockpiled power-ups.

The usage of power-ups is also handled differently this time around. You’re able to hold up to 30 power-ups in your inventory and Atomic Punk can go into battle with up to ten equipped at a time. Thus, you’ll have to make some sacrifices based on your battle plan since there’s no way to maximize all of your stats. If you want to maximize your firepower, you may have to skimp on bomb capacity or speed, and if you’re facing a particularly hard stage, you’ll probably want to make room for at least one elixir. Stages now have varying time limits as well, ranging from 180 seconds to as low as 70 seconds, which potentially makes an argument for bringing a clock along since timing out now results in a lost life. The more powerful items, such as the ever-reliable remote control, will always disappear after one stage, meaning you’ll need to buy several if you want them to last through an entire factory. Scariest of all is that if you perish, any equipped power-ups will be lost for good. This creates a thrilling dynamic where it’s easy to become powerful quickly, but doing so puts tremendous pressure on the player as well, encouraging them to always play cautiously and with purpose.

It’s not perfectly balanced though, and players who get far enough will likely notice the economy is a bit too stacked in their favor. If you can make it through the first few factories with minimal purchases, you can stockpile enough gold to buy anything you want in bulk since most items are downright paltry in their pricing. Once you’ve unlocked the remote control, you can just stock up on those and burn through most stages easily with a balanced spread of firepower, bomb capacity, and speed. There’s still the ever-looming punishment should you die, but this strategy can get you through the game very quickly as long as your fundamentals are decent enough.

Atomic Punk fulfills another important milestone within the franchise – it’s the very first entry to provide a multiplayer mode! Don’t get too excited though, because it’s not in line with what would become the series standard and is minimal overall. Since Bomber Boy predated F1 Race in Japan, there was no chance of it getting Four Player Adapter support, leaving two players as the only option. There are two modes available: “Panel Mode” is a standard deathmatch where players have to collect power-ups in order to defeat each other, whereas “Powerful Mode” gives players a full arsenal from the start so they can get right to blowing each other up. There’s no way to play this mode with AI and there’s only one arena to choose from, so you’re better off with the next game in the series for some multiplayer. 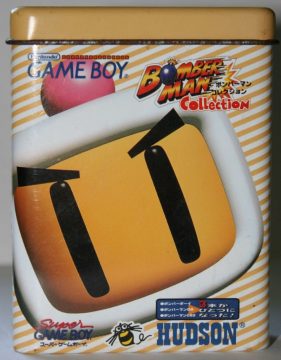 Bomber Boy was re-released in 1996 as part of the Game Boy’s Japan-exclusive Bomberman Collection alongside the first two Bomberman GB games, complete with a stylish tin box. The only addition to this port is Super Game Boy support, which adds a bit of color and a pretty nice looking border, but it’s not exactly an essential upgrade. In 2003, another compilation called Bomberman Selection was released exclusively in Korea and contained Bomber Boy alongside Bomberman GB. Since this collection was for the Game Boy Color, the port is now fully and properly colorized, making it the best looking version.