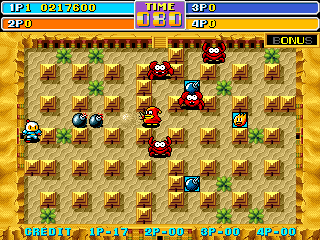 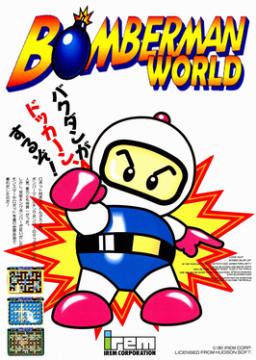 King Bomber is back to his villainous ways and has taken over the United Nations headquarters, so you know he really means business this time! It’s once again up to Bomberman and his brothers to put a stop to King Bomber’s evil plans, and this time the journey is a globetrotting one, taking players to themed stages based on real world locations like Japan, Africa, Eurasia, North and South America, and even the North Pole. It’s also worth noting that the “Bomberman Brothers” moniker used to refer to the team in this game would end up getting reused much later in the series as the name for the Bomberman crew in Super Bomberman R, making this game a bit prescient despite its otherwise derivative nature.

New Atomic Punk: Global Quest (also referred to as Atomic Punk 2 on the game’s marquee) is both the final entry in the “Atomic Punk” line and the final entry to use the Dynablaster name in Europe. The European release was dubbed New Dynablaster: Global Quest and the Japanese version was called Bomberman World (the 1998 PS1 game makes this a bit more confusing in retrospect), but after this, all subsequent entries in the franchise would use the Bomberman name in their titles in all regions. 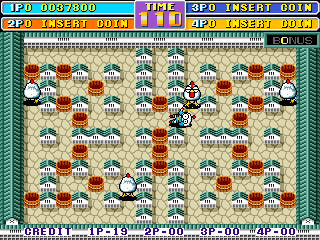 Like with the previous arcade game, pseudonyms make properly crediting the development team impossible, but a few of the names (KIMIKO/KIMI, HIDARI/HIDARIN, and NAGOMI) can be traced back to graphics and programming work on R-Type Leo and Superior Soldiers. The “NANAO” name is once again included, though notably alongside a credit for “IREM” as well, perhaps implying that the core Irem team may have had more involvement with this entry than Atomic Punk. The number of credited pseudonyms is smaller overall, which may have contributed to both this game’s fast turnover and lack of notable improvements on the formula.

The template here is the same as the previous arcade installment of Atomic Punk, featuring six areas with six stages each, though all versions of the game now have four player co-op. Bonus stages have now been introduced, appearing before the boss of each area. In these stages, the goal is to blow up as many soft blocks as possible, finding as many point items as you can in the process. By default, you only have a small amount of time to do this, but by finding the five letters that spell “BONUS” in the previous stages, you can increase the amount of time you get to a pretty generous degree. They’re a nice change of pace compared to the ones console players are used toand earning higher scores has more appeal in the arcades, making these stages a good fit for the environment. 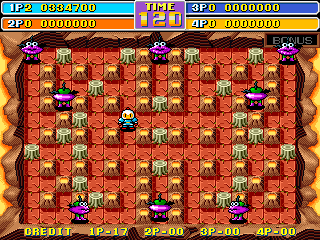 Some new power-ups have been introduced in this game, and some existing ones have been tweaked as well. This game is the first in the series to introduce power-ups that give you multiple firepower or bomb capacity boosts in one go, which does a lot to improve the pacing of the game by allowing you to prepare for the bunches of foes you’ll encounter without having to clear out too much of the stage. A clock allows you to freeze all onscreen enemies, making them easy pickings, and the medal takes a page from the stars in the Mario franchise, allowing you to defeat anything you touch while you remain invincible.

A new type of bomb has been added, which allows for explosions to split and turn corners if they have leftover range after hitting a block or wall. It’s an interesting idea, allowing you to catch enemies off-guard from a distance, but it can be difficult to judge where the explosions will end on the fly and it takes maximum firepower to get any mileage out of them, so they’re not as enticing as they may sound in most situations. This bomb is also limited to five uses before you lose it, a restriction that has been extended to the remote control as well, meaning that it’s hard to get too excited for either power-up. The remote control was arguably too powerful, so this nerf makes a degree of sense, but it just feels too extreme. 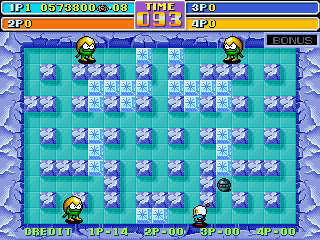 New Atomic Punk takes the speed of its predecessor and ups the ante even further, making for a game that’s almost blistering in nature at times. Enemies move extremely quickly out of the gate and when you start a level, it doesn’t take long to get overwhelmed. While the logic here makes sense- keeping the pace quick for the arcade environment- Irem went a bit too far and the game feels less fair as a result. Ironically, the pace can sometimes slow to a crawl when a stage is mostly cleared out, since it’s easy to end up in situations where you’re chasing a lone foe around an empty arena, hoping they’ll eventually run into your bombs since they’re too fast to trap.

The new batch of foes you’ll encounter are pretty obnoxious too, including things like a creature that eats your bombs and runs around with them at lightning speed, likely killing you in the resulting explosion, a caped humanoid that takes a whopping three hits to kill, getting faster after each hit, and armadillo-like creatures that roll around periodically, remaining invincible the entire time. While your foes may be more annoying this time around, they also have a bit more personality – some enemies will visibly panic when they see your bombs, prompting them to run away, and others will audibly react to getting hit, whether that’s with a sad cry or with an exclamation of shock. It’s a cute touch that gives every enemy a bit of extra life and charm.

Bosses are back and are functionally the same, though King Bomber thankfully got a significant overhaul and his encounter is far more exciting as a result. It’s now a three-stage boss fight in which he starts with a flying machine, then pulls out a bazooka once you destroy it, and finally starts playing dirty with a shield that makes him intermittently invincible once you have him on the ropes. 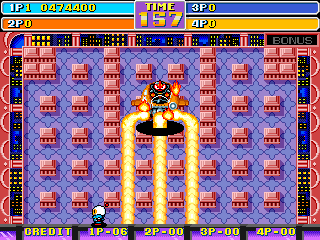 The idea of basing each area on a real world location is a great one, but the game doesn’t really do much with the concept. Some areas like the Japan one use obvious but effective ideas, such as ninjas that hide themselves and Edo period architecture for the hard blocks and walls, whereas others like South America and Eurasia resort to generic ideas like fire-themed and cave-themed backdrops that don’t highlight any of the history or unique aspects of these regions. Enemies seem to be placed randomly and most of them don’t really suit any of the selected regions in particular. The soundtrack is still pretty decent, adding in a couple of guitar riffs and harsher sounds alongside the bouncy vibes of the previous game, but the soundtrack also fails to provide appropriate atmosphere for its environments. Between all this and the lack of any environmental gimmicks or hazards, New Atomic Punk feels like a downgrade from its predecessor, promising more but delivering less.

Battle mode returns and is just about the same as last time, though with a strangely edgy, testosterone-fueled setup that feels out of place. The intro for the mode shows the Bombermen threatening to kill each other and the goal this time isn’t glory, but rather to win the admiration of a human woman in a revealing outfit, which raises questions that probably shouldn’t be answered. The Bombermen themselves also have an even more burly appearance this time, leaning harder into the football player design introduced by its prequel. The battle mode does have some improvements, such as a few different arenas with different soft block arrangements and music tracks that change based on the current round. 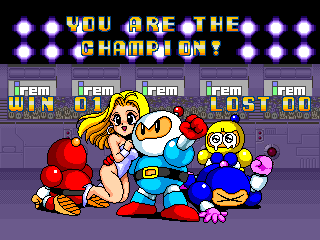 New Atomic Punk: Global Quest is ultimately an underwhelming entry full of choices that feel like a downgrade compared to what came before it. It’s still fun in the way that Bomberman is on a fundamental level, but it’s hard to recommend it over its predecessor, let alone some of the console entries. For the biggest fans of the franchise, there are at least some unique things to see, though most of them aren’t likely to leave a significant impact. After this, a traditional Bomberman title wouldn’t end up in the arcades again until 1997’s Neo Bomberman, which was developed by a different team, making this Irem’s final interaction with the franchise.