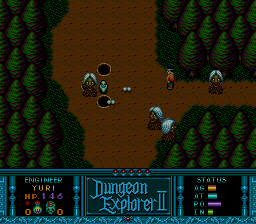 At first glance, Dungeon Explorer II looks nearly identical to its predecessor, using most of the same graphics and practically identical mechanics. Indeed, on the surface there’s not much different, but what is there has been improved quite a bit. There are eight character classes at the beginning, just like the first game: Fighter, Thief, Wizard, Cleric, Bard, Hunter, Dwarf, and Elf. Each has a set name this time, although you can rename them if you want. Partway through the game, you can also upgrade them to an more powerful variation (Fighter becomes a Knight, Thief becomes a Rogue, etc.) It also expands on the hidden characters from the first game, by offering an additional seven characters to find and play as, bringing the total roster to sixteen. These include a Witch, Monk, Princess, Robot (!!), Engineer, and Beast. It’s also a subtle improvement, but the character movement animation is also a bit smoother. 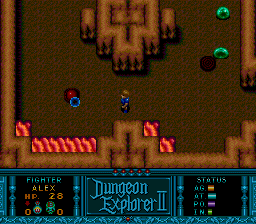 The game is a bit less linear than its predecessor, offering several subquests for additional items and experience, and features a much longer game in general. There are a few new items to be found, including one that repels enemies, and another that causes your weapons to bounce off walls. The towns also include a game where you can play Blackjack with the Grim Reaper, allowing you to gain or lose lives depending on your luck. The fully narrated intro (the North American version’s acting was produced by Working Designs, meaning it’s much better than your average English dubbing) tells the story of the downfall of Natas, but introduces a new enemy to destroy. The cinema graphics aren’t that impressive, but the anime portraits when finding a new character are welcome. The cover artwork is also provided by fantasy artist Takuhito Kusanagi. The CD soundtrack is beyond fantastic, an impressive collection of synth rock that fit perfectly aside any of Falcom’s Ys games. Which makes sense, considering it’s composed by Yoshio Tsuru, who provided arrangements for many Falcom albums.

Dungeon Explorer II is definitely a much better game than the original, even if, outside of the awesome music, it doesn’t take huge advantage of the CD format, other than offering a slightly more involved quest. The Japanese version is easy to find, but the North American release is extremely uncommon, and is one of the more expensive releases on the system (along with Bonk III, although not quite as pricey as Dynastic Hero). It can also be found on the Wii Virtual Console.