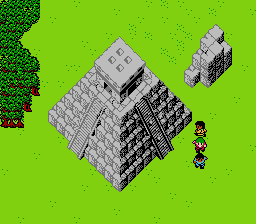 The sequel: Asteka II: Templo Del Sol (also known as “Taiyō no Shinden” or “Temple of the Sun”) was released for the computers in 1987 and the Famicom in 1988. It ditched the text input and drastically modernized the interface. The Famicom version was designed by Compile and published by Tokyo Shouseki, who later became known as Tonkin House and did several other Falcom ports (including Romancia for the Famicom, and both Ys III and IV for the Super Famicom.) In this version, you play as two young explorers – whom you get to name – who are investigating the disappearance of their lost uncle in South America. Most of the game is displayed in a first person viewpoint, with the various command icons on the side of the screen and the text on the bottom. These sections are pretty much just like the adventure game Shadowgate. However, when moving from location to location, the perspective switches to an overhead view, as you walk from ruin to ruin. 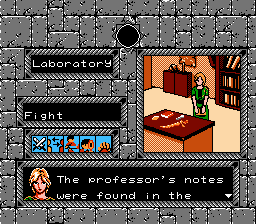 Although the setting is interesting, and there certainly aren’t very many adventure games on the NES, the interface feels too cluttered, with far too many actions and way too many items. The game world isn’t particularly big, but you have access to nearly all of it at once, so it’s confusing to figure out what to do and where to go. The puzzles are pretty boring too, rarely moving beyond combining objects and sticking them in various places. You can’t really tell what directions you’re allowed to move in, so it’s a matter of trial and error until you find the right arrow. You can also switch between the characters, as each of them have different abilities. Every once in awhile, you’ll come across a monster, which naturally needs to be killed. Other than a few cases when you need to use an item, most of these are beaten just by selecting the Fight command over and over. The only determining factor to your victory is your experience level, which is quietly raised by solving puzzles or looking at certain items. If you die in a fight, it’s the game’s subtle way of saying that you missed something.

If it seems like these RPG aspects were shoehorned into the game – well, they were. The fighting, the characters, the storyline and most of the soundtrack were added specifically for the Famicom/NES port. In the original PC versions, released for the PC88/98 and MSX, you’re simply some nondescript dude running around the landscape, with no real supplementing plot, dialogue, or anything. At least the characters in the NES version occasionally gave you clues – here, it’s even more confusing, although many of the puzzles are similar or identical. One of the other major differences here is the flow of time, which passes whenever you leave or enter ruins. Certain puzzles can only be solved at certain times of day. You can also find your way into unwinnable situations in the computer versions.

The PC88 version’s map is 15 screens x 15 screens, making for a gigantic 225 screens total. The MSX version is much smaller (36 screens total) but navigation is difficult since you can’t walk over forest tiles so it’s more of a maze. Some of the puzzles are different too. The NES version is 8 x 8 (64 screens) but with smooth scrolling. 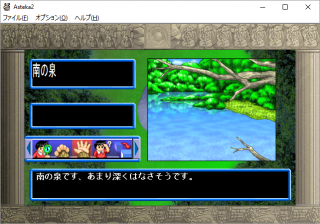 Asteka II was remade for both the Saturn (featured in the Falcom Classics II pack along with Ys II) and Windows 98 (designed by Unbalance, who also did the remake of Romancia.) Both are based on the original PC versions, and feature updated graphics and a better interface. The Saturn version has a bunch of ugly 3D rendering, while the Windows version is only slightly better. visually Your little guy now looks like an Indiana Jones ripoff. This version will also let you know if you’ve hit an unwinnable state with a “DEAD LOCK” message.  The Windows version has an opening movie, a much smaller field similar to the MSX game (36 screens in total) and a notebook that supplies hints.

The music is ultimately nothing special in most of the versions – oddly enough, the NES/FC has by far the best songs – but the title screen theme, dubbed “Temple de Sol”, makes an appearance in certain versions of Ys II. There are also some items shared with the Ys series, including the Golden Pedestal. This is because Asteka II was developed by Tomoyoshi Miyazaki and Masaya Hashimoto, some of the original staff of the original Ys games. 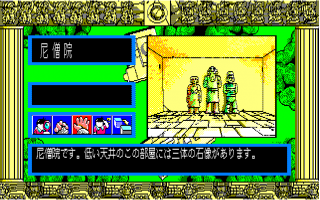 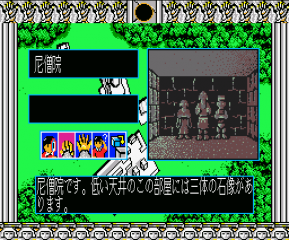 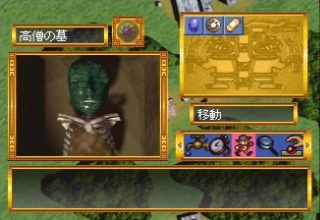 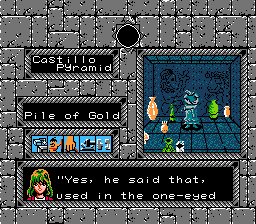 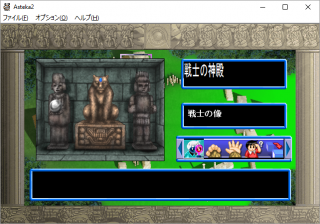