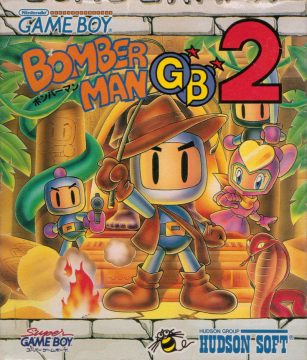 Continuing Hudson Soft’s habit of releasing Bomberman games late into a console’s life, Bomberman GB 2 arrived on the Game Boy in 1995, six years into the old stalwart’s lifespan. Picking up where the first game left off, GB 2 takes its predecessor’s best ideas while scrapping the ones that didn’t hold up, resulting in an improved game in nearly every regard. Though Wario doesn’t return for a second outing, his influence is still felt, in a way; because Wario Blast was used for the game’s title in North America, GB 2 had its name changed to Bomberman GB in the region, bringing back a taste of the franchise’s naming confusion that hadn’t been a thing since 1992. Leave it to Wario to cause a little chaos! This naming change didn’t go on to affect Bomberman GB 3 since that game never received a North American release, so the potential confusion was thankfully short-lived.

It has been a while since the Bomberman franchise shook up its fleeting idea of canon. GB 2 tells the story of Indy Bomber, who looks identical to White Bomberman (and is referred to as “Bomberman” in the English versions) but is actually his grandfather if you go by the Japanese manual. As the name implies, Indy Bomber is an adventurer very much inspired by Indiana Jones, complete with a fedora and a whip that serves as a clever replacement for the bomb kick ability. Indy Bomber is in search of the Ring of Wishes, a legendary treasure that can grant any wish. While there isn’t much to the story, it does come with some strange implications at the end. Once Indy finds the ring, he decides not to take it, perhaps out of a realization of its power being too much for society to handle. Though the ring is supposedly so hard to reach that Indy is one of the few (if not only) to do so successfully, the expository text at the end claims that many battles have been fought over the ring and will continue to be fought over it, which is surprisingly dark for a Bomberman game. The box art also prominently features a Bomber with a gun, something that doesn’t appear in the game at all for obvious reasons!

Instead of the multiplayer-focused setup of the previous GB title, this game goes back to a more conventional “defeat all the monsters” format. Not only is this the better call for the sake of making a more interesting campaign, an additional option has been injected into the proceedings. At the start of each area, you get a choice between two different modes that’ll determine the additional objective you need to complete in each level of the area. Depending on which mode is chosen, you may have to approach the levels in very different ways. Area one starts off pretty tame, with the only difference being whether you have to defeat all enemies in a specific order or not, but the later areas offer far more interesting differences.

For example, the pyramid area features invincible enemies in either mode, but the key to winning becomes completely different. Mode A requires you to destroy all of the gems scattered about, forcing you to scour entire levels without engaging in combat. Mode B makes it so you only need to destroy one fake gem to open the exit door, but destroying the wrong gems causes poison gas to block off pathways, leading to levels that become more stressful and restrictive as time goes on. The modes of the desert area after that are similarly different; depending on your choice, you’ll either have to bomb giant tongues to move them out of the way, or you’ll have to ride them in order to access different parts of the level. There aren’t any perks or differences in progression between the modes, but having the option makes for a single player mode with more variety and challenge compared to several of the previous entries on console and portables alike.

GB 2 retains the permanent power-up system of the previous GB title with few changes. Instead of a bomb kick, you get the whip- which is functionally the same – but beyond that one difference, the power-ups you get are the same, including the Moto-Bomber bike. The Moto-Bomber now serves as a second hitpoint,sacrificing itself for you should you get hit, which is a very welcome upgrade. The final power-up is technically new in that it gives you maximum firepower and bomb capacity at all times so that you’re ready for the final area, but it would have been nice to have some more meaningful additions compared to the previous game. Power-ups aside from firepower and bomb capacity still remain absent, a disappointing choice that results in little incentive to explore levels once your power-ups are capped out at the conservative maximum of four. You still lose all of your firepower and bombs in between areas, but you at least get to keep them in between levels in a given area, only losing one of each if you get a game over. Area eight is the biggest shakeup, forgoing the standard fare for the first boss rush in the series. The final boss is quite a wakeup call in comparison to everything before it and in the last game – it’s a three stage fight against an agile opponent that greatly changes tactics in between phases and should you lose, you have to start from the beginning of the first phase. No wonder the Ring of Wishes has never been claimed!

Perhaps the strangest experiment of Bomberman GB 2 lies with its new “Lesson Mode”. This mode, only accessible from the title screen, allows you to play the first level of the first seven areas without any of the permanent power-ups in order to practice either mode. This is an interesting idea in theory, giving players a chance to sample each mode to see which they like better, but it hardly feels necessary in practice. While certainly not without their challenges, the tasks of each mode really aren’t hard to understand and with so few power-ups available to you, there isn’t much in the way of combat strategy or gimmicks complex enough to require such a level of practice. There’s also no pressure during the main game thanks to passwords and continues bringing you back to the same level you died on, so you can just “practice” as you go through the regular game without issue. Still, it’s a novel idea that could have some use for newcomers to the franchise, and at a point in time where the series had surpassed a dozen releases, any attempt at innovation was a welcome one.

Battle mode is once again available for those who have a Super Game Boy, which also provides unique borders and colorizes the game. There’s actually a cheat code that enables battle mode without the use of a Super Game Boy too, which is a perk the previous game did not have. Disappointingly, there are only six stages available to choose from compared to the eight stages of the first GB game and most of the environmental hazards are reused. If you already have the first GB game and are mainly interested in battle mode, it’s very hard to justify the “upgrade” to GB 2. Bomberman GB 2 is also featured in the same Bomberman Collection as its predecessor. While it’s an improvement in almost every way (except battle mode), Bomberman GB 2 still lacks some of the charm and creative spark of its console brethren and drags on too long just like its predecessor did. That’s partially inevitable due to the less powerful platform it’s working with, but it’s a shame that the Indiana Jones-inspired theming wasn’t utilized to create a more innovative and expansive adventure. The next Bomberman GB title would be the last of them, but as the saying goes, the third time’s the charm.