Legacy of the Wizard is the fourth title in Falcom’s Dragon Slayer series, and the first to be released in English. The game is known in Japan as Dragon Slayer IV: Drasle Family (which is literally an amalgamation of DRAgon SLEyer – the Japanese loves to do this with English words.) It was published by Brøderbund, who was also kind enough to bring us The Guardian Legend and The Battle of Olympus, rounding out a trilogy of cool action-adventures for the NES, despite being otherwise unrelated. 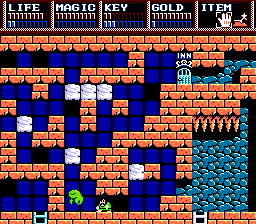 The game focuses entirely on the Warzen (also spelled “Worzen”) family, who live just outside of a sprawling dungeon. The Warzens are descendants of a great wizard who slew a dragon years ago. The dragon, Keela (called Deelgios in Japan), is going to wake up soon. Time to go on a world spanning quest with tons of sidequests to figure out a way to seal him up again? No, time to spend ages exploring the labyrinth he’s sealed in, plotting and finding the stuff you need to destroy him.

From the outset, you pick from one of the five members of the Warzen family to control. 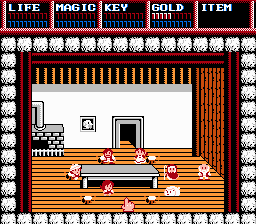 The grandparents on the sides, Douel and Jiela, give and receive your password so you can continue with whatever things you’ve accomplished between sessions. The portrait of their ancestor can also be clicked on to access a sound test. The rest of the Warzen clan are the ones doing the dirty work.

Xemn is the father and a fierce warrior. He can’t jump but he can get a Glove that lets him push blocks out of the way. Also he throws axes, effortlessly slaying most enemies in two hits at most.

Meyna, the matriarch, is a wizard. She can’t jump very well but her magic is excellent. She can also equip a bunch of items like the fire rod and a device that lets her “shoot” blocks around, making them ricochet of any enemy/wall/Warzen they come into contact with.

The son is Roas, the ranger. He’s mostly useless, but he’s the only one that can find and wield the sword, the Dragon Slayer, used to finish off the final boss.

Lyll is the daughter, called an “elf”, and the best overall character in the game. She jumps extremely high and can use an item that makes her jump even higher, and wield the mattock to break blocks..

Finally there’s the pet, Pochi. He’s a domesticated monster. He can’t use items, has the worst jumping statistic in the game, and while his attack is powerful, it has the shortest range of anything. 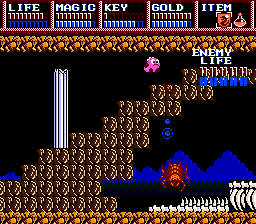 What’s the point of Pochi? He’s a monster, so other monsters ignore him completely, and you can walk right through them without taking damage and even ride on top of them to reach new areas (a totally awesome technique when used with flying monsters). He is essential for scouting out new areas without wasting your resources. Pochi is a beast with a calm yet determined demeanor when walking around and possesses stern grimace when attacking. Pochi is usually a dog’s name, but here it’s a synonym for something that looks adorable that can also bring the heat whenever there’s trouble.

There’s no time for story or dialogue. The entirety of the game’s ROM is harnessed towards one purpose: making the dungeon kick your ass. The visuals look a little like Xanadu (also known as Dragon Slayer II, viewed from a side perspective, with the tiny, squat characters that are the same size as one of the square blocks in the dungeon. There are no experience levels and you can only slightly modify your character’s base stats by equipping a few specific items. Each room of the dungeon is twelve blocks high and sixty-four blocks wide. The dungeon is sixteen rooms by sixteen rooms. Practically each room has its own unique structure and color scheme, so you’re never running around in circles like Metroid, but there’s still almost no clues as to where you’re actually supposed to go. It’s especially tough because there are more fake walls than there are actual doors. 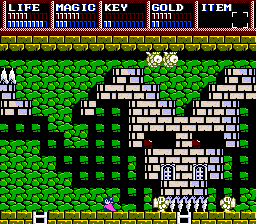 Much of the game is spent running around and slaying thousands of monsters, collecting the gold, keys, and various items they drop. Unlike Xanadu, there are no separate battle scenes or anything like that, it’s closer to a console action-RPG like The Legend of Zelda where you just directly attack enemies. Each family member has a magic projectile of varying ranges. As you delve deeper into the dungeon, you’ll need to keep an eye on your constantly depleting magic supply, which is the only way you can attack. You’ll find potions in treasure chests and slain monsters, you’ll also find vile trickery in the many poison bottles littered throughout. There are a few shops and inns to help you out, which will heal both your health and magic provided you have enough gold to stay, but otherwise, you’re on your own. One of the truest “dungeon crawlers” ever made with tons of dead ends, pits to fall into, and hidden areas for your characters to navigate.

Plus, all characters can ride on monsters like Pochi, but they take damage bit by bit. You have to watch out though, you take falling damage whenever you fall past your natural, unmodified jumping height. Pushing blocks works the same way, you can stand on one and push it around in mid-air. If you push it “into” yourself you get hurt and look like a chump. The game does feel rather glitchy and poorly programmed in spots, which doesn’t help. The combination of all these of elements come together to make what is probably the most intellectually taxing game on the NES. It combines this brain-consuming dungeon with relatively fast moving monsters that you need to reflexes to take out without taking too much damage or use too much magic so you can survive the journey.

While Lyll is the strongest character in the game, one might ask if there’s any reason to use anyone else. Well, whenever you leave your house or an inn, you can walk around the inventory screen to grab up to three items, which you then equip. 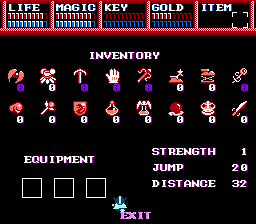 The catch is, not every person can use every item. Only Xemn the father can use the Glove as an example, and only Meyna the sorceress can use the Crossbow. This is essential, because even though it’s not initially apparent, each section of the dungeon has an area that only a particular family member can access. There you can use their skills to enter and get past the various puzzles and obstacles. At the end of each area is a tremendously difficult boss, some of which are brutally unfair in their difficulty. If you die, there’s no checkpoints or respawns unless you have an elixir, so you get sent all the way back to the house on surface, and need to traipse right back up to it again. Presuming you defeat the boss, you get one of the four crowns, and when you obtain all of them, you can have Roas set off to find the Dragon Slayer sword, and eventually beat the final monster. The crowns aren’t just a MacGuffin either, as once you have them, they allow you to use certain paintings to teleport around the labyrinth. The paintings are technically portraits of Princess Selina, from the previous Dragon Slayer game, Romancia. 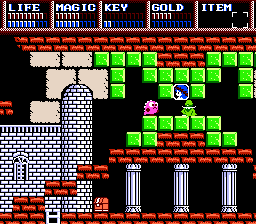 Fortunately your stay in Keela’s dungeon is made more pleasant by the soundtrack. The tunes are few, but they change depending on where in the dungeon you are, and are compositions from the venerable Yuzo Koshiro and Ys composer Mieko Ishikawa. 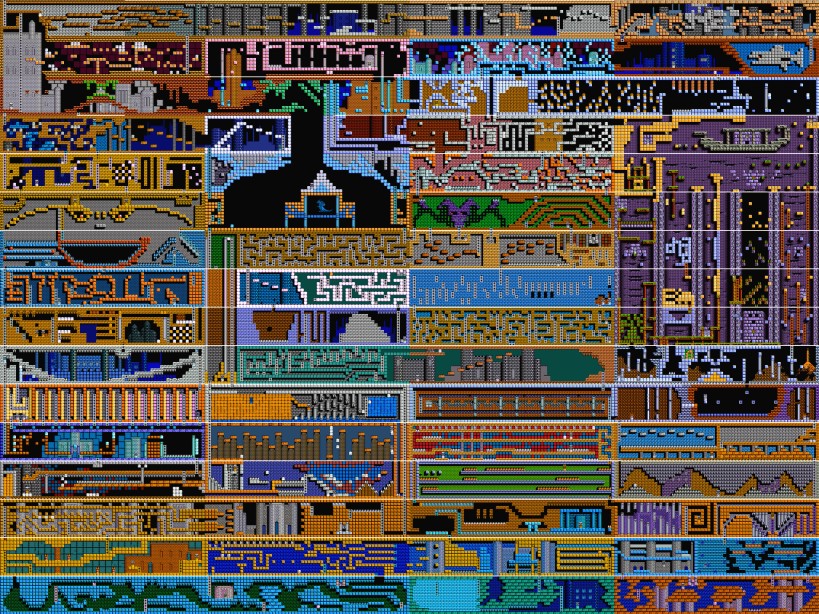 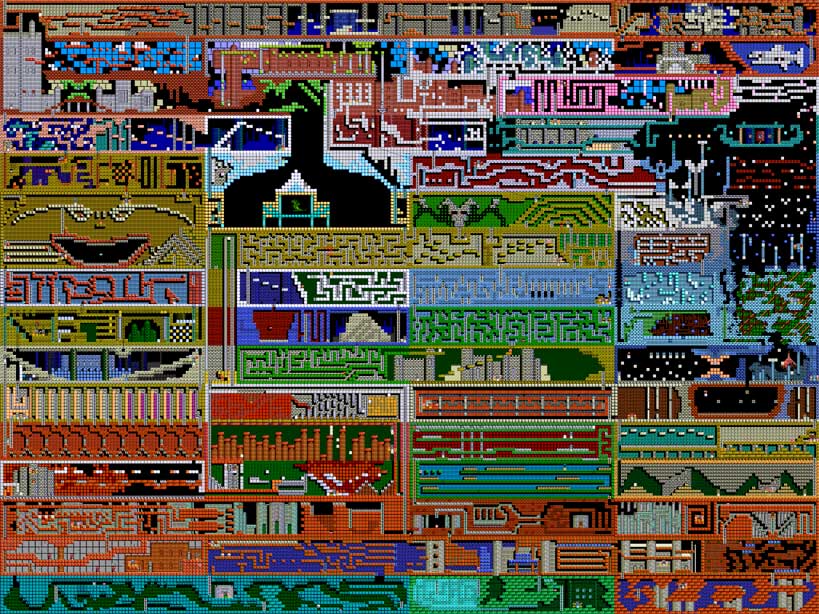 It’s honestly baffling understand how a kid could get through this game. It’s immense and crazy. Did anyone anywhere actually beat Legacy of the Wizard when it was new? Taking on the game without a FAQ or a map is like shaking hands with the devil himself. It’s much much more intimidating and taxing than more famous titles like Zelda II or Castlevania II. This was the ultimate game to play through piecemeal, meeting with your real-life friends and talking about who got to what part of the dungeon and found what hidden shop/item/gold where. 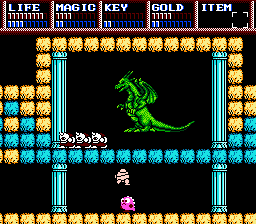 What an awesome game. 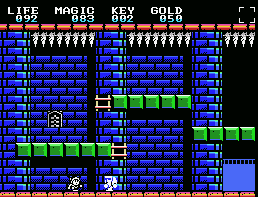 Dragon Slayer IV: Drasle Family is one of the only early games in the franchise that was never released on the PC-88 or 98 series of computers. Instead, it was initially released on the MSX and MSX2 platforms. The games are mostly the same, though there are some minor differences in the level design. The MSX version has lesser quality sprites with transparent colors (a common issue with the system), while MSX2 version has much better looking graphics overall. The MSX2 version is also a bit faster, and adds a small intro sequence where the logo breaks out of the bricks, as each member of the family is introduced. Neither has any scrolling screens, which is also typical of MSX games. 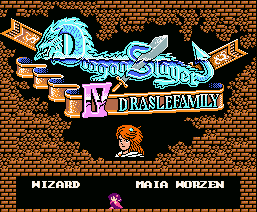 The Famicom port was published by Namcot, which was actually released a few weeks before the MSX versions, making it one of Falcom’s first titles that was designed for both the console and computer audience. The end credits list the developers as “Quintet”, assuming many to believe it was developed by the same team that eventually left Falcom to create games like Actraiser and Soul Blazer, but this was just a nickname given to the development team and it having the same name was a coincidence.

The game plays like the MSX2 version, although without the intro, and with the addition of scrolling in the rooms (though it still flip-scrolls every few screens). The graphics are pretty similar, but the color schemes in some areas are different. The most of the basic layout of the dungeon is pretty much the same, but some of the rooms have been altered a bit, and the whole right side of the map is drastically different. There are also a few new and different songs, particularly the item selection song and Pochi’s theme. There’s also some weird spelling differences in the names between the versions. It’s a bit of a shame that so many other games in the Dragon Slayer series have been ported and remade several times over (like Xanadu and Sorcerian), and we’ve never seen a redone “Renewal” version of Drasle Family. Too bad, because the now-popular Metroid style play mechanics and huge game world would potentially bring in a lot of new gamers, if they updated some of the shakier aspects a bit. The reason for this seems to be a rights issue, since other companies were involved with the 8-bit port. Only mobile ports and emulations of the MSX versions have seen digital distribution. 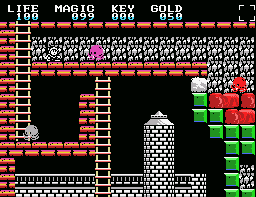 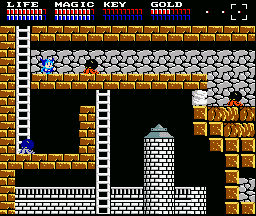 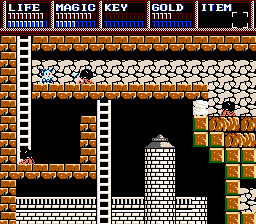 All About Dragon Slayer IV An extremely comprehensive site, in both Japanese and English.
RPG Classics – Legacy of the Wizard Nice shrine to the game.
Map Anime Full maps for the games. Archived at Wayback Machine. Thanks to MP83 for the link.